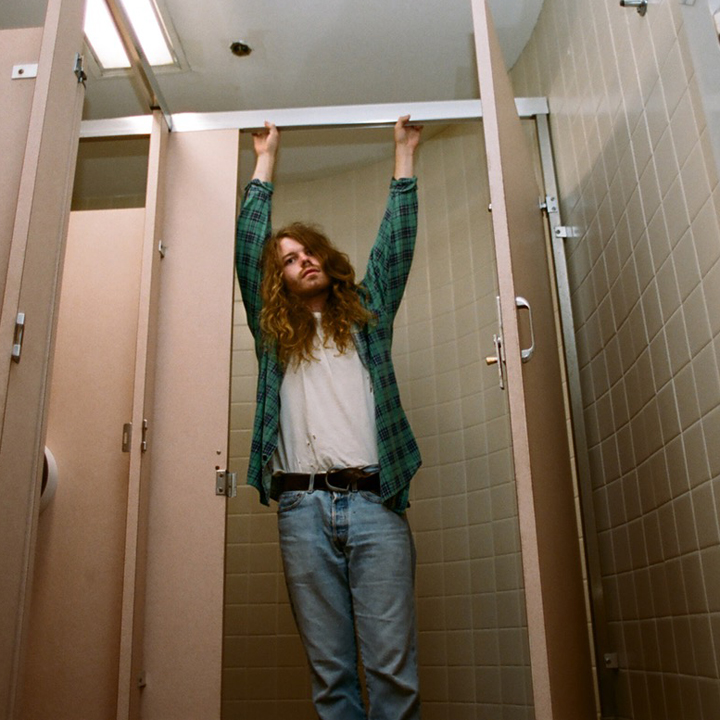 Jesse Welles has no problem giving it to you straight. It’s in his nature to pull no punches. Ask him about the current state of rock music and the rock singer and multi-talented musician will tell you how few things in life make him so equally prideful and angry as people bemoaning its death. He’ll readily tell you that despite others constantly talking up his once-in-a-generation, jarringly emotive voice, to him it often sounds like nothing short of “burnt toast.”

“I hate to experience anything that isn’t just the cold-hard truth,” the Arkansas-native who performs as Welles, and has a knack for penning at turns tender, melodic and gut-punching rock music, says without hesitation. “But music definitely takes me away from it all,” he offers with a nervous laugh. “Well, for three to four minutes anyway.”

Welles understands the best singers wield their instrument with a stealth utility; they’re readily able to unleash a wealth of emotion from little more than a murmur, if, in his case, an occasional manic howl. Where vocal precision belies sterility, depth and character are blood let out from a deep wound. To that end, where Welles may not deem himself a storyteller in the classical sense — he fancies himself a rock lifer, tattoos and all — on record his aching voice does plenty of heavy lifting. He’ll tell you responds most profoundly to “road-weary” singers like David Bowie, John Lennon, and early Bob Dylan. He recalls drawing instant inspiration from Kurt Cobain when first hearing Nirvana’s “Lithium” in middle school. “I heard this American just barely getting through the lyrics and I was like ‘OK. This is cool. I can do this.’” Now, after nearly a decade of pointed urgency and a year spent on the road opening for some of rock’s hottest acts, not only does he have a desire to share “everything that’s been going on in my head, but he finally feels right where he belongs.

“I don’t want to say I feel comfortable but I think we’ve got a good little beginning going,” he says with supreme humility of a breakout year that included gigs at Bonnaroo and Austin City Limits as well as opening stints for tastemaking acts including Royal Blood and Greta Van Fleet.

Still, playing the underdog remains a highly appealing notion to the soft-spoken musician. “I hope we catch everyone off guard,” he says of his steady ascent with a sly chuckle. “I love it. It’s how I’ve always done everything. Just be quiet ,come in and do your work. Come out of nowhere. The thing is,” he notes, “you can really only pop out of a cake once.”

The reality however is Welles has been preparing for his grand reveal for years now. The 23-year-old takes a deep breath and slowly begins to recall those halcyon days back in his native, small-town Ozark, Arkansas, when he’d record music off the radio straight to cassette tape; or the nights when he’d lie awake and dream of playing gigs at roadside bars in nearby Fayetteville; or when in 2015 he finally threw caution to the wind and high-tailed it to Nashville to begin recording songs with acclaimed producer Dave Cobb (Jason Isbell, Sturgill Simpson) much of which ended up comprising his forthcoming debut album.

Welles is forever trying to best understand how his genre-blurring music, inspired by an equal parts love of the Beatles pop craft, sweaty classic-rock riffs, psychedlia and confessional singer-songwriters, acts as his salve. Still, the singer says, “I hate to admit to any kind of escape mechanism because I’m really conscious of being tricked. I can get too heavy and way too into my own head and spiral downward. Oftentimes unintentionally I take everyone else in my life along for those rides with me. Every once in awhile though I come back up for air.”

It’s in his own contradictions and self-revelation in song that Welles best proves himself an undeniable talent. Where “Do You Know How To Fuck?” rides over a slashing, barbed wire electric guitar riff, Welles’ voice pleading “love me tender!” and bellowing with ache, moments later he’s exhaling, his breath stretching into smooth curves, on the acoustic-and-Mellotron-anchored “Summer.”

And on his latest single, “Seventeen,” the musician flexes his psychological muscle like never before. A slow plea for intellectual empathy, the song, a translation of a poem he wrote several years back about gender fluidity, finds the singer at his most vulnerable and expressive. “Being from a small town, boys are boys and girls are girls. Gender fluidity was something I hadn’t really thought about much,” he says. Once he began contemplating the subject, however, “it really intrigued me and I got my whole head blown off by the notion. I fell in love with it and I had to write a tune about it.”

If the singer finds a principal power in his own art it’s in its ability to foster contemplation, a songwriting trait he picked up from his early fascination with the Beatles (“I got Sgt. Peppers on cassette tape when I was in second grade from my grandfather. I listened to that thing like mad. It was all I would do.”). Oftentimes this leads to his most profound self-analysis. “Sometimes I get so heavy and I drag you around,” Welles admits. “But I’m happy and I love to have stupid fun and laugh and make blanket forts and play video games and get high. But every once in awhile I crack open a book that reminds me it’s all fleeting. It’s like I’m trying to hold water in my hands and it keeps slipping away.”

Welles is constantly writing new material (“The songs will just fall out”) and yet he’s highly self-critical of his work. “It’s just running with an egg and a spoon and sometimes the egg falls off before you get to the end,” he says of the oft-nerve-wracking songwriting process. “But every once in awhile a good one comes along.” He wrote the bulk of his debut album first when living in a communal art compound in the college town of Fayetteville, Arkansas and then on the road over the past year. When living in Fayetteville, friends of varying artistic disciplines all shared an apartment building they dubbed “Space Mountain.” “Some of us worked on bicycles, some of us were doing painting and art,” he explains. “It was our own little Andy Warhol experiment. It was crazy.” While attending college, Welles led several bands. However in moving to Nashville a few years back and then recording with Cobb, the artist acknowledges he’s entering a new chapter in his musical life. “I’ve had this sense of urgency towards music since I was 14 or 15,” he says of diving headfirst into his career as a recording artist in recent years. “Now it’s all about ‘How do I move this forward?’”

For starters, Welles has been pounding the pavement playing live gigs. “We’re running around with this show in a box and whatever stage it is you get out and you open the box up,” he says. “It’s just about making that show good. It’s also helped him expand his horizons. “In a year’s time I became a well-traveled guy after spending 22 years just in Arkansas. And I mean not leaving. Hell, driving an hour and a half was a big trip. So this really felt like moving forward.”

Though he notes of performing, “I don’t much like being in a crowd but I can be in front of one as long as they’re at my will,” he offers. “Plus it would do no good to sit around and think on these things and write this much and make this much noise alone in my room if I don’t get to show it to everyone else.”

What Welles is undeniably certain about though is there’s no time like the present to share his artist creation with the world. “I’ve dedicated a small period of my life to this rock n’ roll lifestyle so if this doesn’t pay off I’m going to be old with all these tattoos and gonna look like a piece of old leather.” He stops and laughs before cracking a smile. “It’s just time.”