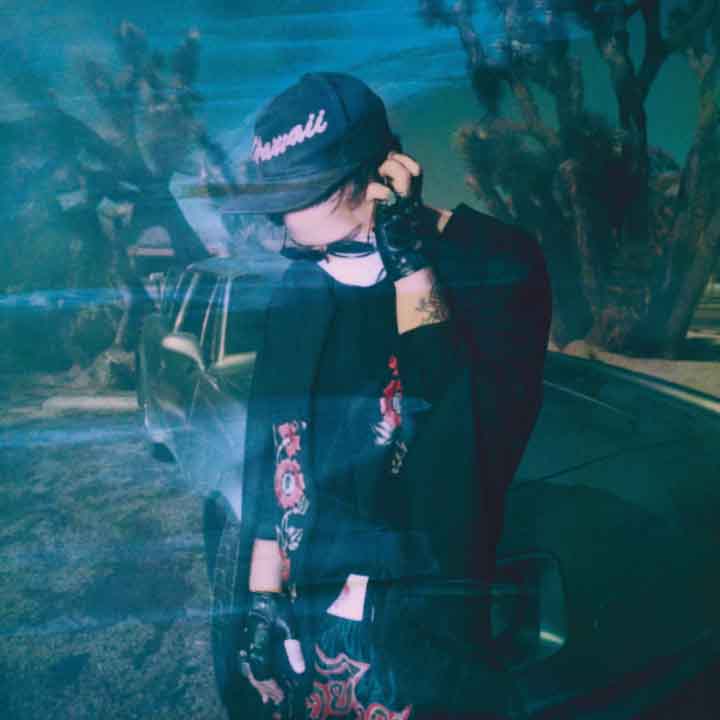 Where are we headed? What are we consuming, how is it affecting us, and why does everything feel so bad and weird sometimes? These are some of the questions posed on Ruban Nielson’s fourth album as Unknown Mortal Orchestra, Sex & Food—a delightfully shapeshifting album that filters these real-deal serious themes through a vibrant sonic lens that spans battered drum-machine funk, doomy and thrashing rock, and pink-hued psychedelic disco. Recorded in a variety of locales from Seoul and Hanoi to Reykjavik, Mexico City, and Auckland, Sex & Food is a practical musical travelogue.

Over the last decade, Nielson’s established himself as one of the most inventive sonic travelers currently working, and Sex & Food is the most eclectic and expansive Unknown Mortal Orchestra release yet, from the light-footed R&B of “Hunnybee” to the stomping flange of “Major League Chemicals.” The adventurousness is all the more impressive considering that there’s a bit of DNA from the past UMO discography in Sex & Food: the soft-focus psych of the project’s 2011 debut LP, the lovely melancholia of 2013’s II, and the weirded-out funk of 2015’s virtuosic Multi-Love.

But rather than living in the past, Nielson is firmly in the here and now, drawing from personal unrest and generational malaise while surveying a variety of societal ailments. “If You’re Going to Break Yourself” and “Not in Love We’re Just High” chronicle the effects of drugs and addiction on personal relationships, while the lyrics “Ministry of Alienation” drip with modern-day paranoia like the silvery guitar tones that jewel the song’s structure: “My thinking is done by your machine/ Can’t escape the 20th century.” It’s a scary world out there, and it’s been that way for a while—and Sex & Food finds Nielson surveying the damage while attempting to reckon with the magnitude of it all.

Along with UMO bandmates and frequent collaborators Jacob Portrait and Kody Nielson, Ruban began work on Sex & Food in early 2016, initially intending to draw musical influence from post-punk luminaries of his youth—think Killing Joke or Public Image Limited’s singular Flowers of Romance. But as he toiled, Ruban began to realize the aesthetic limits of his aims. “Post-punk is so tasteful to my generation,” he states. “There’s no guilty pleasure to it—I just think it’s cool and good. When it comes to rock, I want to get into dodgier territory.”

So Ruban exited his comfort zone, literally: even though some of Sex & Food was recorded in his Portland, Oregon home studio (the same one that adorns Multi-Love’s cover), his desire to “get out of there,” as he puts it with a chuckle, led to a quest for creative inspiration that literally spanned the globe—from Reykjavik to Mexico City, as well as the Vietnamese city of Hanoi, where Ruban was inspired to draw influence from the imagery of the Vietnam-based films of his youth, as well as the powerful images conjured by Jimi Hendrix’s recording of “All Along the Watchtower.” “It was just like I hoped it would be,” he gushes about the city. “It’s really hard to record there—everything is so humid—but it was a really inspiring place, too.”

At one point in their travels, the recording process was interrupted while in Mexico City, as Ruban and bandmate Jacob Portrait were trapped in the city’s Chapultepec Park following the devastating earthquake that hit Central Mexico this past year. “I was terrified,” he states about the experience, which cut off their access not only to the studio but to their lodgings. “I was so shaken up that I ended up getting a bunch of stuff done when I left,” Nielson explains on the effect that the experience had on Sex and Food’s creative genesis.

And his journey eventually led him to a curious but fruitful fount of inspiration: his past work. “At first, I thought that this was going to be a sad record, like II,” he explains when discussing how reflection helped push Sex & Food forward. “I was influenced enough by my own early stuff that I went into it thinking, ‘If I was a fan, how would I want to bring some of that back into what I’m doing?’” That old-becomes-new approach is more than apparent on the lush, beautifully understated “Hunnybee,” reminiscent of II’s “Swim and Sleep (Like a Shark)” and drawing lyrical inspiration from Ruban’s daughter, whose middle name gave 'Hunnybee' its title.”

“I was trying to figure out how to write a love song about my daughter,” he states. “She’s seven now, but the song will still be there when she’s a woman, so I was thinking about encoded fatherly instructions. I thought it was cool to say, ‘There’s no such thing sweeter than a sting.’ It makes her the protagonist—she can kill you! I thought that was good. The other line was ‘Don’t be such a modern stranger,” because I was thinking about what if the world is more atomized and isolated as she gets older?”

Indeed, the modern world—and all the thorny complications that come with living in it—loomed large on Ruban’s mind while making Sex & Food. More specifically, the act of reaching for something positive from the negativity.  This is reflected in the album's title. "In America the classic pairing is sex and violence and I never understood it. Violence: an anomaly and an abomination. Something that could disappear from the world, leaving it a better place. Sex: just a normal and natural thing. The pairing for me has always been sex and food. The last and best pleasures that are left. More fundamental and relatable than even music.”

But even though he’s not afraid to get topical throughout—as evidenced on the surprisingly boisterous “American Guilt” or the roomy-disco medication-meditation “Everyone Acts Crazy Nowadays”—Ruban was also careful not to get too political, and for good reason. “Everything is so soaked in politics, and it’s kind of depressing for everything to be political right now,” he explains. “I wanted to keep it light. I think everyone’s feeling angry, and there’s nothing particularly interesting about my anger.”

A statement of selflessness, to be sure—but make no mistake: Sex & Food reaffirms the vitality of Ruban’s voice in today’s musical landscape, and when it comes to navigating the strange and often discouraging pathways our society’s taken, it makes for a damn fine compass, too.