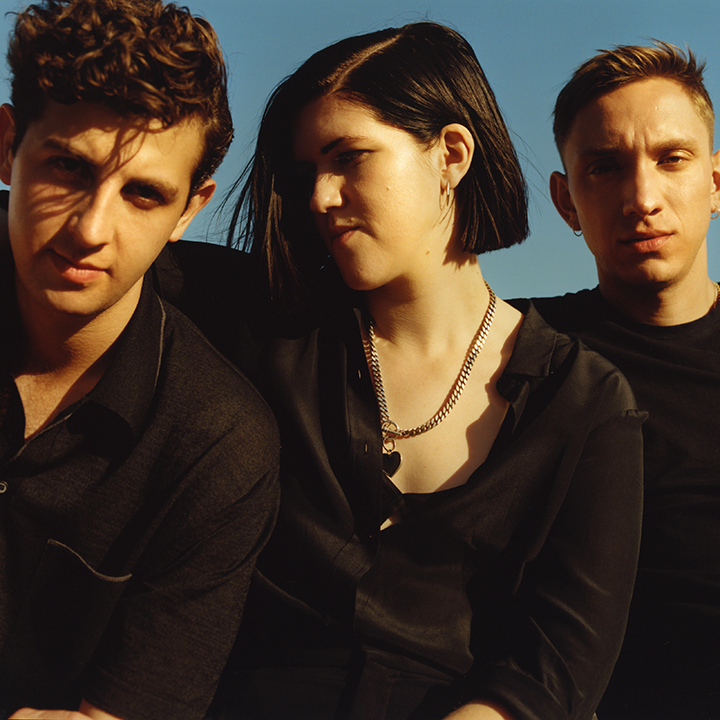 In March 2014, The xx took their advanced pop experiment in fortified introspection to its most cripplingly self-conscious conclusion. At Manhattan's Park Avenue Armory Drill Hall they played a succession of dates that The New York Times headlined 'The Rock Show, Inverted.' Playing to an audience of just 45 people at each of the twenty five shows over ten days, Romy Madly Croft, Oliver Sim and Jamie Smith had to bow their heads in penance to avoid looking square in the eyes the effect of their music, at that moment gridlocked in a beautiful communion of the inner life of shy people.

A new touchstone for pop intimacy, the show had been road-tested in the bowels of the city during the previous year's Manchester International Festival. The xx debuted a new song at The Armory, Performance. Its chorus ran: "You'll see me hurting/when my heart breaks/I'll put on a performance/I'll put on a brave face," set only to barely audible sub-bass and the kind of intricate, spidery guitar motif that had by now become a signature to their sound. In retrospect, The Armory shows were a line-in-the-sand moment for The xx. They had reached the furthest limits of their experiments in the monochromatic. A hard won light was beginning to beckon.

"The record sounds triumphant and celebratory," says Jamie, of their third long-player, I See You, "but the journey we went on and what we had to go through to get to this point should be acknowledged." I See You is the spoils of four hard years' labour, a vertiginous new height scaled for the pop group. It is a record that sees them performing with optimum new nerve, transparency and clarity. Because it is made by The xx, its implicit boldness is sculpted from a tough and tender space, one which stretched its limits for expansion against the core musical aesthetic Romy and Oliver first found as 16-year-olds playing on a stage together. "What makes us sound like us isn't intentional," says Oliver. "What always surprises me," says Jamie, "is when they just play the two instruments together they come up with things that I could never come up with, so simple that I wish I could. That particular guitar sound and Oliver's bass playing will always create this mood which I love and which I can't imagine ever getting bored of."

I See You is marked by a tonal shift to something close to pure, crisp pop structure, adorned by unusual crescendos that echo a dextrous DJ inching their dancer toward climax without ever quite lifting the house lights. Its lyric sheet moves from the danger and hopelessness of love to its deliciousness and rapture; a move into a more outward looking proposition. I See You is recognisably still The xx but now powered by voluble ambition, of the three perfect counterweights to one another starting to not just realise but harness their full potential. You might even want to think of the decisive move from Joy Division to New Order here, too. The Armory shows turned out to be a double bluff. When they take their plum festival slots in 2017, armed with the ten most robust songs of their career The xx should prick the skin and touch gently the shoulder of an audience reaching to the back of the field.

I See You is split in two down the middle by Performance, the most cognisant xx song of the suite. The metaphor at the centre of the ballad is pure Bacharach and David. The delivery is something else. Though shimmering resolutely from the half-light to the spot, it unleashes in Romy something confident and spacious. Since stepping tentatively onto stage barely out of childhood, Romy has had to learn to embrace her inner frontwoman. But then all of The xx have challenged themselves in the making of I See You.

For Jamie, this manifested itself most pertinently in becoming a solo, if still xx-branded artist with his sensational club suite, In Colour. True to title, solo Jamie may yet turn out to be The xx's Wizard of Oz moment, as Romy and Oliver witnessed vicariously what they might now look like in technicolour. "Jamie's record had a big effect on me," says Romy. "It was the sense of being outside of something you'd been involved in but then also being involved because Oliver and I are on the album. Observing it, I found, made me appreciate what I do a lot more. I did feel like I was missing something, too. I'm not ashamed to say that either, even though it was a weird feeling. There was so much pride and admiration in what Jamie had done but at the same time it could be weird to see him on stage at Alexandra Palace, with my voice playing through the speakers and I'm standing in the crowd. It was odd. But it also inspired a hunger. I wasn't complacent. It was inspiring me to think OK, Jamie's going to come back so let's have some great songs for him. We're not the most obvious front-people. We didn't grow up dreaming about that. But I do really enjoy it." Adds Oliver, "I've really missed it. And I didn't realise that I would miss it so much. It did come as a surprise. I get a lot of confidence from doing it and it was hard not having that for a while."

Work on I See You began in earnest with conversations between Oliver and Romy while Jamie was making then promoting In Colour. For second album Coexist the trio had locked themselves away in a small room in Angel, Islington, refusing to play anything to outsiders until they deemed it ready. "It was made in a weird, dark place for all of us," says Jamie. Three introverts getting used to being stared at and scrutinised was always going to be difficult emotional territory to surf. The first xx record, released when Romy and Oliver were still teens, had sold in disproportionate quantities to the local scale of its ambition, finding a global audience that wildly surpassed everyone's expectations. "Everyone kept telling us this is moving really fast," says Oliver. "And in the moment I'm not sure we believed it," adds Romy. The xx have sold 2.7million records the world over. They have platinum and gold discs amassed from across Europe, the Americas, Australia. They're one of only three British bands -- the others being One Direction and Mumford & Sons -- to have a gold certified debut album in the USA in the last decade. Their multimillion streaming and social media stats are dizzying. If this wasn't supposed to happen, I See You sounds like the concession not just that it did, but furthermore that it was meant to.

The construction of the third xx record could not have differed further from its predecessor. They travelled to Los Angeles, Marfa, Texas, New York, Iceland. After a road trip in which they played soft rock all the way from Portland to LA, they decamped to a studio in the Hollywood Hills and recorded repentant party-boy apologia, Replica there and then. The dappled sunlight of yacht-rock is a new texture for The xx. I See You is full of them, from Oliver's afrobeat bass lead on the defiant garage opener, Dangerous, to Romy's playful purr in I Dare You. When he added the Hall & Oates sample from I Can't Go For That to I See You's first single, On Hold -- as close as The xx will ever likely get to a certified pop banger -- Jamie says an employee from the studio caught him dancing by himself to it, "which was embarrassing." It is at these eureka moments that the expert producer knows he has located the exact specialness of his pop operation.

With their unforeseen reach, The xx have quietly become trusted hands across the wider pop hemisphere. Romy has written with Kelela, Jamie famously produced for Drake and Alicia Keys. They curated their own festival, Night and Day, extending branches from London to Berlin and Lisbon. Oliver would make sure to be on site first thing every morning, to greet each artist they had booked individually. Part of the strive for self-improvement that demarks the new arc for The xx on I See You comes from their faithful devotion to music not just as artists but as fans, too.

While living in LA for a spell, Romy attended writing camps of the sort designated to factory fashion hits for the megastars of the day, including a session with hit-maker for hire Ryan Tedder. Though forever intrigued by it, this is categorically not The xx's world, and it should be noted that every song on I See You is written solely by The xx. "We've always really loved pop and for this record we were trying to find new ways of doing things," she says. "It was terrifying but I think I knew it was going to be horrible and I wanted that. I knew it was going to be a test." Making the record, Oliver says, "was about us becoming less self-conscious of how we think we are expected to sound and more about making the kind of music we want to hear." "I really enjoyed not feeling so clenched," adds Romy.

While Romy was learning the whys and wherefores of the hit factory and Jamie toured his solo record, Oliver fronted campaigns for the esteemed menswear wing of French fashion house Dior. "This is all so far out of what we usually do," he says. The xx were once a lesson in beautiful compression, of looking inward, a study in quietude and subtlety. They are three best friends who obsessed together, drifted apart and found an invigorated new meaning and purpose with I See You. The mirrored packaging of the record is there for a reason. I See You is a record about falling in love with one another, all over again, a minor key Musketeers moment for Romy, Oliver and Jamie. It feels like the start of a new dawn for The xx. The record ends with the song Test Me, a unified declaration of how much that love can hurt but how, when it chimes in tandem, there is nothing that can quite match it.

"It's strange to like the record as much as I like it," says Jamie. "It's about seeing reflections of yourself in other people. It's basically us understanding each other better. Being pals again. We went through lots of ways of saying that and I See You seemed the best." I See You feels like a love letter scripted to themselves, celebrating a marriage that works for better and for worse and on this unusual occasion, would like to tell the world about it. "I never think about people watching or the audience in any way, really," says Jamie, "I think about the moments on stage and the moments when we come off stage, of us just enjoying ourselves as friends. I don't even think about how it's going to go down on stage. I just like the memories I have of us being on stage." "They are," says Romy, "the best." "Communication has not always been easy with us," says Oliver, "But we're learning. The thought of sharing the stage together again is perfect. We're all ready."