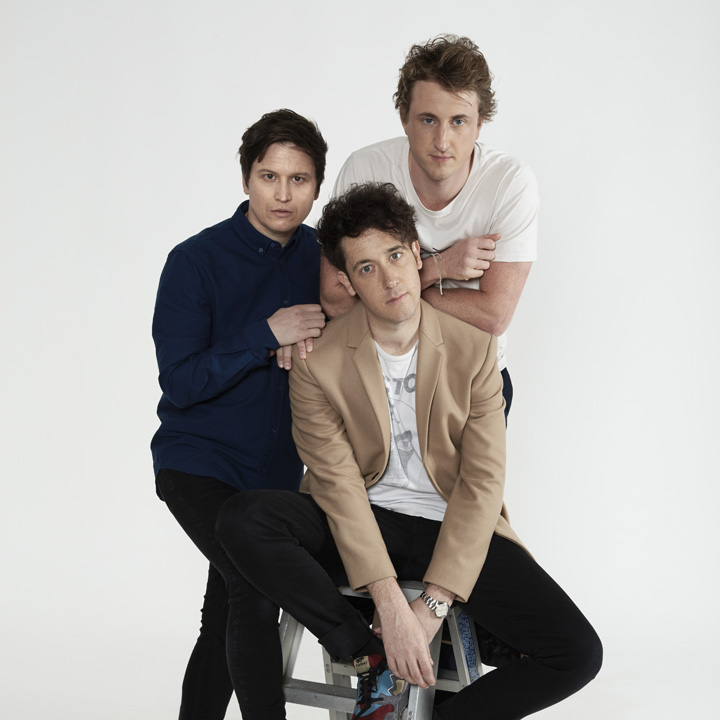 Wombats fans. Thousands of ‘em. The Reading & Leeds promoter checking his onsite heat-tracking app was stunned to discover hordes of fans descending en masse on the Festival Republic Stage set like an alien swarm, one of the biggest stage-rushes of the 2015 festival. Two months later the band stepped onstage to headline Alexandra Palace for the first time, kicking off the most euphoric pop party of the year. Somewhere between those two moments, the UK went Wombats crazy. Again.

“Something happened in the UK at the back end of ‘Glitterbug’,” says singer Matthew ‘Murph’ Murphy, recalling the fresh wave of Wombat-mania that swept the country in the wake of their Top Five third album. “It felt like a bit of a u-turn for us and made me feel more secure being in The Wombats. Maybe there was a slight sense of establishment that came from those shows. It felt like there was a resurgence for us in the UK, which was really exciting for me.”

Not that there’d been any sign of a stumble along the way. Ever since Murph, bassist Tord Øverland Knudsen and drummer Dan Haggis – who met and formed The Wombats at the Liverpool Institute Of Performing Arts in 2003 - emerged in 2006 and swiftly became chart-quashing champions of the noughties guitar pop explosion with hits including ‘Moving To New York’, ‘Kill The Director’ and ‘Let’s Dance To Joy Division’, they’ve barely looked back. The euphoric tales of romantic misadventures in cinemas, forests, weddings and rock clubs that filled their platinum-selling 2007 debut album ‘A Guide To Love, Loss & Desperation’ garnered them a strong and dedicated fanbase in thrall to Murph’s amalgam of irrepressible hooks and downbeat tragi-comic lyricism and, with such bare-hearted emotional depth to their ditties, The Wombats resolutely refused to be a flash in the pan.

Their 2011 second album ‘This Modern Glitch’ hit Number Three in the UK on the back of “flawless” (BBC) and “triumphant” (Daily Mirror) tunes such as ‘Techno Fan’, ‘Tokyo (Vampires And Wolves)’, ‘Jump Into The Fog’ and ‘Anti-D’, Murph’s brave, confessional epic about his addiction to antidepressants. And by the time their more synth-pop third album ‘Glitterbug’ was sent Top Five in the UK by a whole new generation of Wombats fans and had gone gold in Australia, they’d proved themselves amongst the most enduring bands of the noughties indie rock generation and one of the UK’s biggest and best guitar pop sensations.

Though their Alexandra Palace headline show was “amazing… insane”, and the string of lower-key 2017 shows to celebrate the tenth anniversary of the debut album (including two sold-out shows at the Sydney Opera House and a Brixton Academy show that sold out in a day) were a “ridiculous party” involving various drunk friends and crew members dancing onstage in wombat costumes, like all the best creative minds, Murph craved refinement.

“‘Glitterbug’ was a weird one for me,” he says. “I like the songs but it felt a bit too kitchen sink-y. We were pushing the red line button a bit too much and needed to think a bit more organically – less is more, rather than recording ten different harmonies and turning them up to twelve. I didn’t want to make that kind of record again. I wanted to make an album that had more swagger, was a bit more laid back, something that wasn’t punching you in the face every time you listen to it.”

Escaping their deal with Warners, the band signed with Kobalt and set about writing their fourth album in February 2016 from three corners of the globe. Dan was in London, Tord was nursing his new family in Oslo and Murph had already relocated to LA ahead of ‘Glitterbug’ to be with his new partner, so the trio convened for fortnight-long writing sessions in Oslo, keen to produce a follow-up sharpish because “when we’re not on tour we don’t know what the hell we’re doing”. Though many songs were written by Murph in LA, their long-distance methods actually helped bring the band together. “I’ve been perpetually jet-lagged for about a year,” Murph says, “but on every level, musically and interpersonally, we’re much closer now than we were on ‘Glitterbug’ and I think you can hear that. A few songs on this album were the first time we'd ever started and finished a song all together from scratch in the studio, so it was nice we’ve now got that gun in our arsenal.”

Recorded at The Pool in Bermondsey (in April 2017) and One Eyed Jacks in Wimbledon (August to October 2017) with producers Mark Crew (Bastille, Rag’n’Bone Man) and Catherine Marks (Wolf Alice), ‘Beautiful People Will Ruin Your Life’ finds The Wombats stepping up to the frontline of alt-pop innovation alongside The xx, Perfume Genius and The 1975. From the ultramodern whooshes and AI heartbeats of ‘Cheetah Tongue’ to the Vampire Weekend-doing-‘Tomorrow Never Knows’ that is ‘Dip You In Honey’, it sounds like a 2040s indie record today, slavered in Blade Runner synths, future grooves, celestial solos and space age melodies.

Lyrically, the new material acts as something of a surrealism-tinted sequel to the autobiographical meltdowns of ‘Glitterbug’. “The last album was about me meeting someone and my life going upside down in Los Angeles, partying too hard and getting myself in trouble,” Murph explains. “This album is about me battling against that, trying to live an adult life. And failing.”

Recently married, Murph claims to love the LA lifestyle and that his anxiety and depressive issues are “at least 40 per cent better” as a result of being lifted on the wings of the City Of Angels, but on the album he characteristically pans in on the more nightmarish side of the Californian dream. “I guess that’s what I’m drawn to, the difficulties and negatives,” he admits. “I’m definitely more content out there but I still have the same bullshit going, directly related to anxiety and depressive issues. My life is all kinds of fucked up but there’s a part of me that actually enjoys it.”

So the state-of-the-art buzzpop of ‘Lemon To A Knife Fight’ is about how Murph is “constantly dominated” in his relationship, inspired by “getting my arse handed to me” on a drive along Mulholland Drive after a fraught dinner. ‘Black Flamingo’, built around a ‘Coffee & TV’-like rhythm, reflects his comfort in dysfunction in lines like “I wanna stay here in this curse”. And then there’s the Fiestian ‘Lethal Combination’, “about how me and my partner continue to fuck each other up and we’re actually terrible for each other but there’s nothing either one of us is gonna do about it. That’s her favourite song.”

There’s an intractable draw to the dark edges of a silvered life – to the loss of control at the edges of sanity. ‘White Eyes’ recalls a night in New York where Murph’s social awkwardness tipped over into “a freak out”. ‘Out Of My Head’ reads like a diary of the deranged – “That was when I’d just moved to LA and felt like everything was crazy,” Murph reveals. “It sounds like someone who could be on the brink of a nervous breakdown, which I did feel like I was at the time.”

There are moments of all-out euphoria on the record too: psychedelic Ibiza noir of ‘Turn’ is “a full-on love song” according to Murph. And perhaps the album’s finest example of The Wombats’ tongue-loosely-in-cheek dance into the darkness comes with the Strokes-like ‘I Only Wear Black’. “That’s the most me song on there,” Murph says. “It’s appreciating my moodiness. It’s maybe the closest song to ‘Let’ Dance To Joy Division’ that we’ve had, the lyrics encapsulate The Wombats perfectly.”

Encapsulating The Wombats, however, is about to get far trickier. ‘Beautiful People Will Ruin Your Life’ is a giant leap into maturity, a record that’s still instantly sing-along but demands to be taken seriously. “It’s probably my proudest moment,” Murph says. “We always figure out a way to triumph in the face of adversity. Occasionally we’ve been given a bad rap but we’ve always come through. It’s like in The Shawshank Redemption when he swims through a river of shit but comes out clean on the other side, that’s this album for me. It’s the album we always should have made.”

If beautiful people ruin The Wombats’ lives, the resulting album will make your year. The ‘Bats take wing.