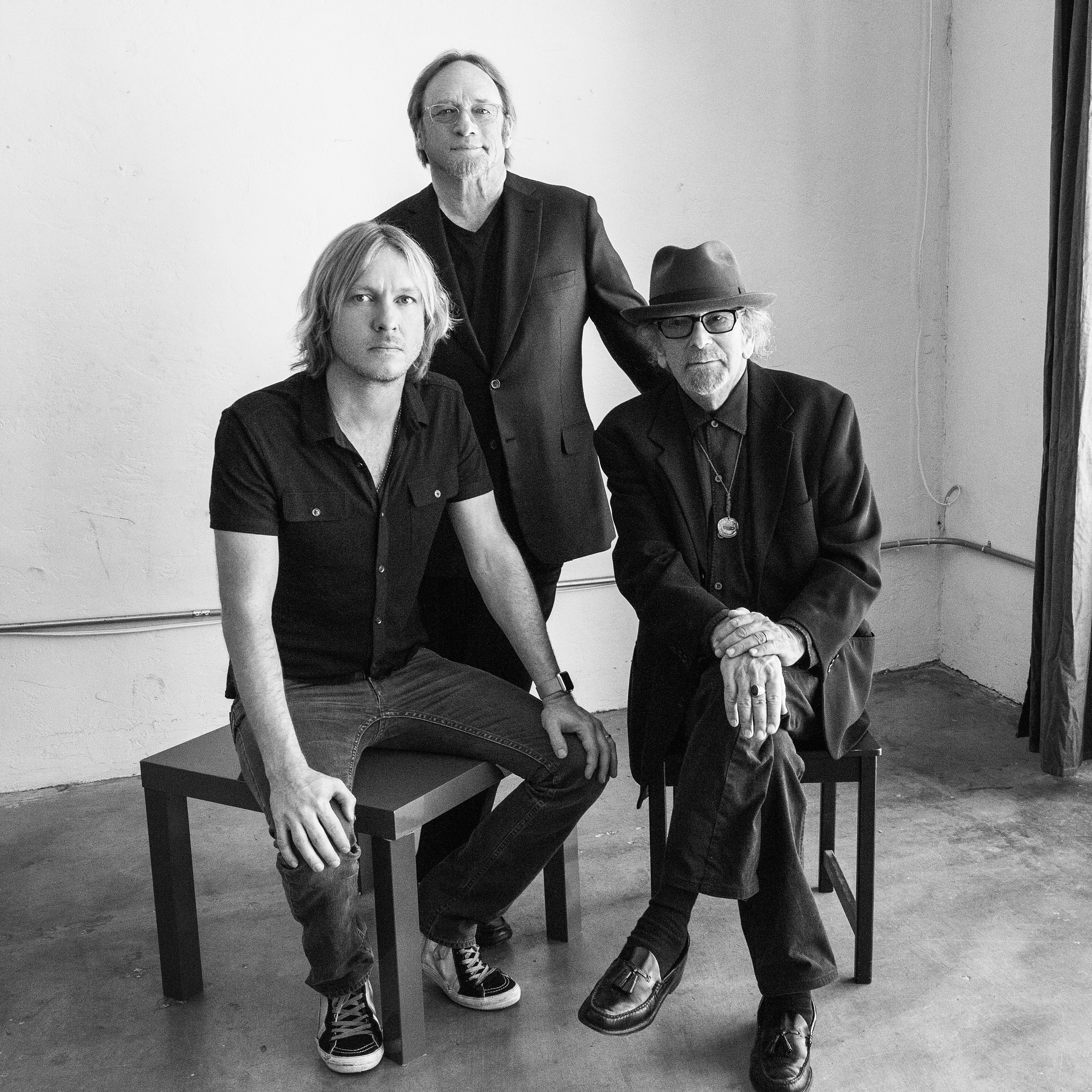 Breaking more fresh new blues-rock ground than ever on their raucous and soulful new album Pierced Arrow, The Rides are letting their growing legion of fans know they’re in this for the long haul. Their ongoing freewheeling journey is all there in the name. When they came up with that clever moniker for what Stephen Stills calls “the blues band of my dreams,” the two-time Rock and Roll Hall of Famer, five time Grammy nominated guitar great Kenny Wayne Shepherd and renowned Chicago rock/blues keyboardist Barry Goldberg knew it was more than just a one time, multi-generational fusion of legendary musical souls. They envisioned – and have since set out upon – a dynamic, wide open road ahead.

The trio laid the simmering groundwork for all this by calling their debut album Can’t Get Enough because once they started writing, recording and jamming together, they couldn’t. Just before its release, Stills said, “As good as I think The Rides are now, we can’t wait to get some live gigs under our belt.” Goldberg echoed, “As proud as we are of the album, fans are going to see something even more exciting from us when we start playing these songs live.” And they did.

Those few wild months of touring the U.S.—combined with hitting the Top 40 on the Billboard 200, and a nomination for Best Rock Blues Album at the 2014 Blues Music Awards—sealed the deal. They were in it for the long haul.

From NYC to Austin, rockin’ L.A. and many other cities, their high-energy performances transcended individual star power to create a deep and rejuvenating chemistry, which in turn inspired them to reconvene not long after the tour was over to start work on songs that would collectively become Pierced Arrow. Onstage and in the studio, the groundwork for the trio’s multi-dimensional creativity is laid by the explosive rhythm section bassist Kevin McCormick (a co-producer on Pierced Arrow) and Shepherd’s long time drummer Chris Layton, a Rock and Roll Hall of Fame Inductee himself as a member of the legendary Stevie Ray Vaughan & Double Trouble.

Stills, who penned the era defining “For What It’s Worth” with Buffalo Springfield before cementing his legend with Crosby, Stills & Nash, sums it up crisply: “We had so much fun playing on stage, we had to do it more. Lots of freedom. Kenny and I found a wonderfully exciting knack for playing lead at the same time without a real ‘arrangement,’ just sort of instinctive guessing, from watching each other’s hands. Neil Young and I used to do this with Buffalo Springfield. And the grooves are always right on the money, never rushed or jittery.”

Shepherd, whose two decades of accolades include two Billboard Music Awards, two Orville H. Gibson Awards, the Blues Foundation’s Keeping The Blues Alive Awards, two Blues Music Awards, six #1 blues albums and a recent tour with Van Halen, adds, “It’s a pretty impressive group of musicians having a genuinely good time making raw, heartfelt music together. There are no egos. We’re just in it for the music and we’re having a ball. Because we’re a new band and there’s not this major history or big catalog to live up to, we can just go out and play and see where the moment takes us. For me, it’s a liberating dynamic that’s different from my live solo band because I’m sharing the vocals and guitar playing with Stephen. I love being part of a unit where everyone weighs in with thoughts and opinions.”

A formidable blues/rock force in his own right, Goldberg was a founding member of the Electric Flag, earned a Grammy nomination for producing and playing on Percy Sledge’s Blue Night and has had his songs recorded by Rod Stewart, Gladys Knight & The Pips, Joe Cocker, Steve Miller and Gram Parsons and most notable for playing the iconic rock intro on “Devil With A Blue Dress On” with Mitch Ryder. Before the Rides, he toured with the Chicago Blues Reunion Band. As a teenager growing up in Chicago, he sat in with Muddy Waters, Otis Rush and Howlin’ Wolf. He’s played with the greats – Hendrix, Duane Allman, Mike Bloomfield, Mick Taylor and Harvey Mandell – but was in complete awe of the guitar interaction between Shepherd and Stills.

“Playing with Stephen and Kenny Wayne brought me back to the high level of musicianship, experiencing intense and transformative electricity onstage,” the keyboardist says. “The response to it from our audiences was incredible. Everyone got it. Their excitement was infectious. I’ve played with lots of great bluesmen in my day, but this was a more universal crowd responding to Kenny Wayne and Stephen. These guys are rock stars, and it was hard not to be inspired by the energy they were giving off.”

A passion for the blues isn’t the only thing The Rides have in common. Stills and Shepherd, who first jammed together at a private party before the 2007 Super Bowl, share a mutual love of classic cars. In that light, it’s not surprising that the title of their new album is a riff on the famed Pierce-Arrow Motor Car Company, a maker of luxury cars in the first four decades of the 20th Century. Stills knows his history and sees a unique parallel: “A lot of band musicians drove Pierce-Arrows back in the late 20s and 30s, either out to Long Island or to and from the trains. They were really roomy and you could fit several guys and their instruments, and tie stuff to the running board. The hood ornament (as depicted on the album cover) is cool looking. I find the lines of that model particularly appealing, clean and precise like a good five piece band.”

Thinking more specifically about the spirited, whimsical mix of barnburners and soulful ballads on the 10- track set, he admits there may be more to the symbolism. “A pierced arrow is one with a hole in its feathers,” he adds. “No telling where it will end up. Or maybe we are just messin’ with your heads. I certainly have had my share of mixed messages, mixed metaphors and the like. It could be a fierce warrior about to unleash an arrow that has been tampered with, just as likely to come back and hit him. Kinda feel that way about the general state of things. Sometimes well intended messages will veer wildly off course.”

For Stills, Shepherd and Goldberg, the process of writing songs from scratch on Can’t Get Enough and then touring opened an exciting new feeling of intimacy that fueled the creative process of writing and recording Pierced Arrow. The lead vocals are about evenly split between Stills’ raw, weathered vibe and Shepherd’s passionate grit, and Stills had the ingenious idea on the easy flowing reflective ballad “Virtual World” to, a la CSN, blend their voices into a sweet harmonic dual lead. “There was something so magical to me about harmonizing with this man who is so well known for this kind of thing,” says Shepherd. “Crosby, Stills, Nash and now me!”

What Shepherd calls their “united vision” for the band is the through line that jumps off hard with the fiery Rolling Stones influenced blues rocker “Kick Out Of It” and the equally explosive jam “Riva Diva.” From there, lyrically and musically, the moods are always in a playful state of flux. Shepherd’s lead on the atmospheric rootsy acoustic ballad “By My Side” gives way to Stills’ lament over some high energy riffs, explaining speed to “Mr. Policeman.” Stills’ “Game On” is all blistering, harmonica laden high octane roadhouse blues – and Shepherd answers with his equally potent lead on the romantic rockabilly jam “I Need Your Lovin’,” which features one of Goldberg’s trademark piano romp solos. The other two originals are “There Was A Place,” a slice of graceful soul heaven showcasing Stills’ softer side; and the sizzling, kick-ass closer “Same Old Dog,” which finds him making a political statement about how history all too often repeats itself.

Just as on Can’t Get Enough, Pierced Arrow includes a few iconic covers. In the early 70s, Goldberg (writing with the late, legendary lyricist Gerry Goffin) scored a hit for Gladys Knight & The Pips with “I’ve Got To Use My Imagination,” but it was the slow-burning Bobby “Blue” Bland version which inspired The Rides’ new twist. “Kenny loved this version,” Goldberg says, “and insisted that we perform it on our first tour with that arrangement.” Shepherd was also responsible for suggesting Willie Dixon’s 1955 blues standard “My Babe” after he heard it on a blues internet station while driving to the studio one day. “I love the message,” he says. “It’s the unique blues song that glorifies women rather than talks about bad experiences with them!”

Perfectly summarizing The Ride’s continuing journey and what the making of the new album has meant to the trio, Goldberg says, “It’s so great to be back recording and playing live on this high level again with Stephen and Kenny Wayne, and we’re really excited about the music on Pierced Arrow. I love The Rides’ first album and we were all very happy with it, but this one is even better because it reflects how we’re evolving into a real band. The chemistry is just so good between the three of us. We all have so much respect for each other. When we recorded the first album, we knew it wasn’t just a one shot deal – but along the way, and through touring, we actually found out just how well we played together. Besides realizing how much fun and exciting it was, we were inspired by the opportunity to break new ground every time we got onstage, getting tighter all the time until we evolved from three veteran artists playing together into a real unified ensemble.”

Adding to that eloquence, Stills has just one thing to ask: “Can we PLEASE get this new stuff in front of a live audience soon?” They may not be driving a Pierce-Arrow, but no doubt they’ll be out there.