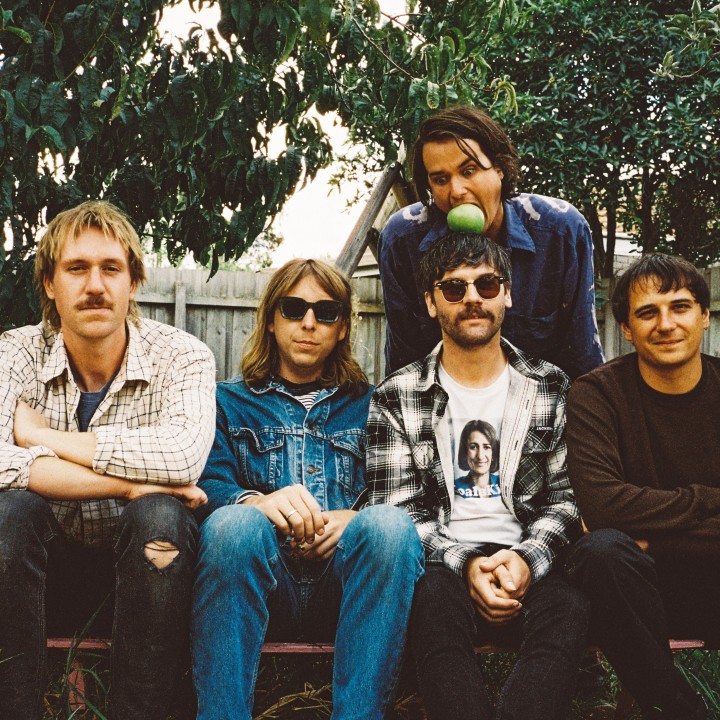 On their fifth album Bittersweet Demons, The Murlocs share a collection of songs reflecting on the people who leave a profound imprint on our lives, the saviors and hellraisers and assorted other mystifying characters. The most personal and boldly confident work yet from the Melbourne-based five-piece—lead singer/guitarist/harmonica player Ambrose Kenny-Smith, guitarist Callum Shortal, drummer Matt Blach, bassist Cook Craig, keyboardist Tim Karmouche—the album sets that storytelling to 11 infectious tracks written mostly on piano, lending a greater emotional intensity to the band’s restless and radiant brand of garage-rock. What emerges is a beautifully complex body of work, one that shines a light on the fragilities of human nature while inducing the glorious head rush that accompanies any Murlocs outing.

With their lineup including two members of the globally beloved King Gizzard & The Lizard Wizard (Kenny-Smith and Craig), The Murlocs recorded at Button Pushers Studio in Melbourne with producer Tim Dunn, dreaming up a prismatic sound that pinballs from sunshine-pop to blues-punk to wide-eyed psychedelia. Naming John Lennon/Plastic Ono Band and Harry Nilsson’s Lennon-produced Pussy Cats among their key reference points, the band adorned their songs with many unexpected details: woozy Wurlitzer melodies, Brian May-esque guitar harmonies, playful atmospheric elements like the whoosh of summer rain, caught by a microphone dragged into the street mid-storm. The result is an album both exuberant and heavy-hearted, a dynamic that wholly fulfills Kenny-Smith’s mission of “always aspiring to write songs that have a bit of twisted positivity to them.”

Equal parts character study and adoring homage, Bittersweet Demons takes its title from the track that catalyzed the album’s entire concept. With its moody piano tones and softly sprawling arrangement, the song took shape soon after the 2019 death of Kenny-Smith’s dear friend Keegan Walker, whom he remembers as a force of nature who “looked at life in such a beautiful and unique way, and had a major impact on everyone he ever crossed paths with.” “‘Bittersweet Demons’ is about someone who can chop and change between partying hard and then getting healthy and seeming very levelheaded,” Kenny-Smith says. “It might look like they’ve got everything figured out, but there’s always those underlying demons that no one realizes.”

A lifelong musician, Kenny-Smith makes for a masterful narrator, endlessly revealing his gift for inhabiting the inner worlds of others. On the album-opening “Francesca,” he turns the lens to his mother and sweetly celebrates her joie de vivre, gently alluding to past struggles with depression. “‘Francesca’ is my mother’s middle name,” Kenny-Smith explains. “She has such an energetic aura of love that comes with compelling conviction. Her larger-than-life personality and attitude revolves around a sometimes-unworldly way of living in the moment.” Sparked from a demo brought in by Karmouche, “Francesca” kicks off with the rev of a car engine and roar of harmonica, supplying a shot of pure joy that fully captures the sensation of “driving down the coast with the convertible roof down” (as Kenny-Smith describes the song’s inciting image).

On “Eating at You,” The Murlocs slip into a pensive mood, building off one of Blach’s demos to deliver a delicately bluesy number laced with plaintive harmonies and lush pedal steel. “That song’s about a someone I’ve known a long time and, each time I see them, I’m amazed that they’re still alive,” says Kenny-Smith. “It comes back to that question of the things people tend not to talk about, whether it has to do with drug abuse or mental-health issues or whatever else.” Meanwhile, “Skyrocket” marks one of the most introspective moments on Bittersweet Demons, expanding on a piece composed by Shortal and slowly unfolding as an epic meditation on the artistic temperament. “Sometimes you worry that the odds are against you when you actually reach the goals you’re shooting for,” says Kenny-Smith. “‘Skyrocket’ is a motivational speech for myself and to whomever can relate to this obsessive manifestation—a constant reminder to keep on rolling with the punches, despite the bumps in the road.”

Now in their tenth year as a band, The Murlocs formed as teenagers on Victoria’s Surf Coast, first covering Ray Charles and Creedence Clearwater Revival songs and quickly moving on to writing their own material. After cutting their teeth playing a local pub called the National Hotel—“We’d get up and smash at a few chords, just to have fun and see what happened,” Kenny-Smith recalls—the band made their debut with a self-titled EP in 2012, then released their debut album Loopholes in 2014. Through the years they’ve taken the stage at major festivals like Splendour In The Grass and supported such acts as Pixies, Stephen Malkmus and The Jicks, Ty Segall, and Thee Oh Sees, all while moonlighting in a number of other bands (Karmouche is the frontman for Crepes, Blach is the frontman for Beans, and Shortal plays guitar in ORB). “Everyone’s always busy, but Murlocs is definitely its own beast,” says Kenny-Smith. “We’re all great friends, and the band is a perfect excuse to hang out and make music together.”

In reflecting on the making of The Murlocs’ latest effort, Kenny-Smith notes that the album’s unfiltered emotional truth is partly connected to a newfound sense of self-assurance. “I think as you get older, you let go of worrying about how people will react to what you have to say,” he says. “It feels good not to overthink anything or try to mask what I’m singing about.” And while its songs contain their share of what he refers to as “confronting moments,” Bittersweet Demons ultimately proved to be an undeniably happy experience for the band itself. “This album really brings me a lot of joy and warmth—it gives me the chills in a positive way,” Kenny-Smith says. “It feels good to have gone down such a personal path and taken that as far as I could go. Now we’re ready to move on from that, and tell some completely different stories.”