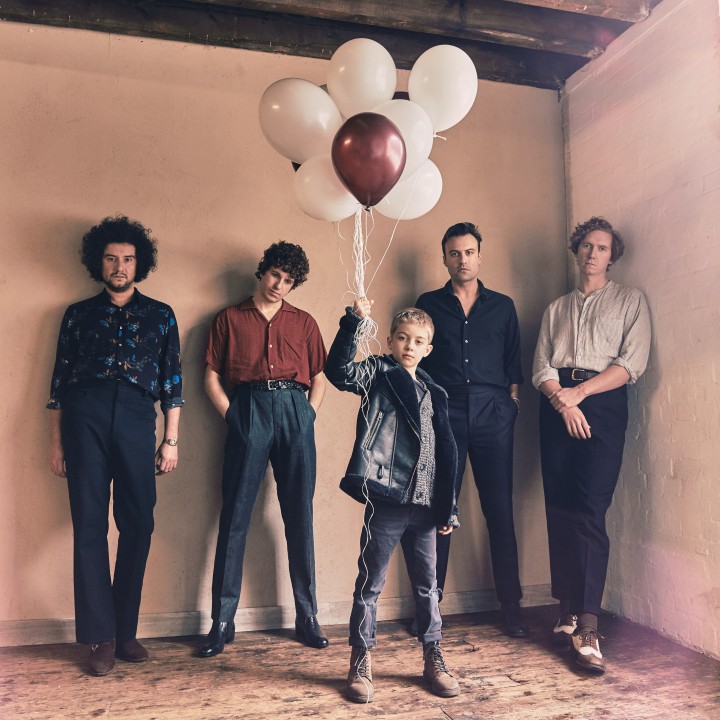 With the roar of arenas echoing in his ears and 1 billion streams rattling around his pockets, Luke Pritchard shakes his tangled locks with the disbelief of the charmed, as amazed as anybody that 2018 is The Kooks’ time to shine.

“In the middle of making this album, the band became big again,” he says. “I don't know how the fuck that happened. We were making an album to save ourselves, and it gave us confidence towards to end. I didn't feel vindicated or ‘I showed them’, it just felt right. It felt like something had happened.”

What had happened? A new streaming generation of young, uncynical indie pop fans came to Kooks classics like ‘Naïve’ – ten years in the Spotify Top 200 and counting – via bands like The 1975, Blossoms and Catfish & The Bottlemen and loving their suave, sunny guitar pop crackle. New singles such as 2017’s ‘Be Who You Are’ racked up 1.5 million hits in weeks, Alexandra Palace sold out in seconds, last year’s ‘Best Of… So Far’ compilation warranted its very own sold-out UK arena tour. Suddenly, without permission, The Kooks were a modern pop phenomenon. Again.

Their second major flush of success, arriving just in time to rescue the band mid-existential crisis, is testament to the talent and tenacity of Luke, his right-hand-man guitarist Hugh Harris, bassist Peter Denton and drummer Alexis Nunez. “It's just progression, progression, progression,” Luke says. “We never had a moment where we've dipped our heads, we've always kept pushing forward.”

Often against ferocious headwinds. Alumni of both Croydon’s BRIT school and Brighton music college BIMM, The Kooks emerged in 2005 with a slew of Top Twenty hits (‘You Don’t Love Me’, ‘Naïve’, ‘She Moves In Her Own Way’) and a two million-selling debut album ‘Inside In/Inside Out’ in 2006. An almost instant sensation – 2008’s second album Konk reached Number One in the UK and spawned the Top Three hit ‘Always Where I Need To Be’ – they weathered the departure of original bassist Max Rafferty and founding drummer Paul Garred and the media backlash against noughties guitar pop with an admirable resilience, determination and circumspection. “With the humility came better records because we got put in our place,” Luke considers. “All those times where we thought ‘we’re not in the club’, it kinda made you go ‘we've gotta work a bit harder’.”

And explore further. Consolidating their position as one of the UK’s finest guitar pop concerns with 2011’s Top Ten Junk Of The Heart album, The Kooks set about broadening their sonic horizons. On Soundcloud, Luke stumbled across London hip-hop producer Inflo, in his eyes “a young Quincey Jones”, and together they put together 2014’s fourth album Listen, mingling The Kooks’ impeccable melodies with elements of R&B, jazz and gospel music. “It was the intention to do a non-pop album,” Luke says, “but I am a pop writer, that’s just what I do. You can't really help it. I think we did a good job of not going too far from what we are. It was cool to flirt with R&B and pop, trying to be Craig David.”

And so Luke intended to continue for album five, following Inflo’s electronic impetus. Straight off the Listen tour in 2015, he and Inflo got to work, writing and gathering ideas for four months, only for the process to hit the rocks during a fraught three-week recording session in LA.

“It was a total disaster,” Luke confesses. “Peter had an argument with Flo and got on a plane home, I stayed for a day then I left. It all fell apart, mainly because there weren't any songs. Myself and Inflo had a real connection, I think we made some really cool music. So we started doing some work together again, with the band, and there was basically an epiphany for the whole band. We all said ‘this isn't The Kooks’. I had this moment where you go ‘do you know what, I really want to go against the grain and make a band record, I want to make a guitar record’. I wanted to pull it back to ‘are my songs good enough, are the lyrics cool?’ And the same with the chemistry with the boys.”

Scrapping almost an album’s worth of “arty, cinematic”, beat-driven material and buoyed by their phenomenal commercial resurgence as forebears and stylistic peers of The 1975 and Catfish, The Kooks took a “breather” to release and tour their ‘Best Of… So Far’ album in 2017, play their first arena tour, then regrouped to redefine The Kooks from scratch. “It was like ‘what the fuck is The Kooks? What is our point?’,” Luke says. And what did they decide? “As a songwriter I am trying to be the next step of a lot of British bands. I want it to be the Kooks then Blur, Oasis then the Kinks – it’s a bit of a dickhead thing to say but that's what we strive for. That's what we're trying to do. That's what I want. I was like ‘we need to make fucking Definitely Maybe, we need to do a modern classic British album’.”

It was clearly time for The Kooks’ definitive ‘band’ album. Running into grunge pop producer Brandon Friesen at a barbeque (we’re all clearly getting invited to the wrong barbeques), Luke discovered a new collaborator surprisingly on his wavelength. “He was the epitome of a rock band producer,” Luke laughs, “he was like Jack Daniels and coke, ‘I want to make an AC/DC record’. But he loved Britpop and he had this passion, so we vibed.”

Recording for a week at a time at the studio at Friesen’s LA valleys house between dates on the ‘Best Of…’ tour, and finishing with three weeks at Producer’s Workshop studios in LA, located next door to the Museum Of Death (“don't fucking go, I've never seen anything so fucked up in my life”), over the course of six months The Kooks, with the help of co-writer Chris Seefried, pieced together their very own ‘Rubber Soul’. “We wanted to make something that had a lot of heart,” Luke says. “I had a girlfriend who ran off with someone else when I was on tour in America, which was not very nice - it was brutal, so I was a bit guarded. Then I met this great girl, I'm writing these songs, I wanted to make ‘Rubber Soul’, something really romantic that would also be part of the British songbook.”

Let’s Go Sunshine – easily the best Kooks record since their debut, if not altogether - is that instant, lovestruck classic, and so much more. Like all of the great British albums, it’s unbound by genre, merging retro funk, dreampop, epic glam, indie rock, country punk, chamber balladry and more, aiming for adventure rather than appeasement. That the comeback launches with two singles ‘No Pressure/All The Time’ is a statement of eclectic intent, a carefree indie-pop sparkler coupled with a sumptuous funk-disco strut. And that’s a bare fraction of this wide-reaching story. The atmospheric arena rock of ‘Believe’ shouldn’t fit on the same album as a lustrous whiskey bar skiffle epic like ‘Weight Of The World’, emo jig ‘Pamela’ and ‘Swing Low’, which sounds like Ziggy Stardust beaming himself into a rehearsal of Sgt Pepper’s Lonely Hearts Club Band and slapping down the showstopper of their lives, but it all gels into a joyously playful whole. As a result, Let’s Go Sunshine is as moving, energising, euphoric and timelessly melodic as it is incisive in its portrait of modern urban life.

Because this isn’t just The Kooks’ most accomplished and varied record; it’s as thematically broad and punchy as it is musically surprising. The heart and soul of the record lies in those tracks about lost innocence, romantic pining and newfound love. Songs about Luke clinging on to one fading relationship (the steamy funk-pop ‘All The Time’, sparkling insta-hit ‘Fractured And Dazed’) and then losing himself in the runaway “Bonnie and Clyde vibes” of a new one (‘Initials For Gainsbourg’, stunning cinematic last waltz ‘Picture Frame’). Songs that span the process of break-up and recovery or, in the case of ‘Pamela’, are about “falling in love with a mental patient – we’ve all been there.”

But look beyond to Luke’s character songs, and the album acts as a barometer of austerity Britain, full of breadline malcontents and dream-crushed youth. ‘Four Leaf Clover’ is a classic Kooks jangler about a girl with a “train-wreck soul”, abandoned by a lover and flirting her way through booze-sodden nights out until “when the night is over and the drugs are gone, you feel the world is getting colder, you’ve got no-one to hold”. “Negativity comes a lot from insecurity and I was trying to talk about that,” Luke explains, “that snapshot of life where someone is in the shit with someone and they end up in their flat on their own doing loads of blow and they're miserable. It’s definitely peppered with truth because I lived that life, I've been there with a massive bag of racket on my own going ‘I'm fucking miserable’.”

‘Chicken Bone’ is the tale of a hand-to-mouth kid escaping the stresses of city life with his regular “big fun mama” booty call. ‘Tesco Disco’ is a gorgeous slice of pop psychedelia about chasing away teen ennui with dope and video games. And ‘Kids’ is a strident neo-grunge statement of intent that finds Luke both defying the world’s demands to be “what you want me to be” and declaring “the kids are not alright”. “There is an injustice to our generation,” he says, “the youth having to pick up the tab. Our generation is picking up the tab from the generation before and that really fucks me off, shit like Brexit. Spiralling rental costs, a lot of that song was based around that - I've got mates who are doing super well and can't afford to put a fucking deposit down. It's a ridiculous world, a ridiculous country.”

There are moments when Let’s Go Sunshine wrong-foots the listener too. When Luke sings “I’ve been lost, locked up and shot/I’m never gonna let them win, never going down again” on ‘Swing Low’ you might assume he’s snapping at his critics; actually “It’s for the kid who's getting bullied or the football team who keeps losing… I wrote it for Crystal Palace”. And when an unfamiliar, rich and country-warm voice crops up in the reformed ‘Not Fade Away’ that is ‘Honey Bee’ you wonder which C&W legend The Kooks have roped in as guest, only for a far more heart-warming story to emerge.

“My dad wrote that song,” Luke reveals. “My sister gave me the song. My dad died when I was a kid, I had his guitar and all his music, he never made it or anything but there was always this song. I played it in Germany once. I played it in the studio, just fucking around and the engineer said ‘this sounds really cool, I'm going to record it’ and everyone comes in and goes ‘This is fucking amazing’. I got the vocal and it's my dad’s voice. It was a fucking trip, singing with my dad.”

Still The Kooks’ family grows; arena-sized and stream-linked, but emotionally tight-knit. Now they have a solid gold classic album to celebrate, share and sing along. Come on over.