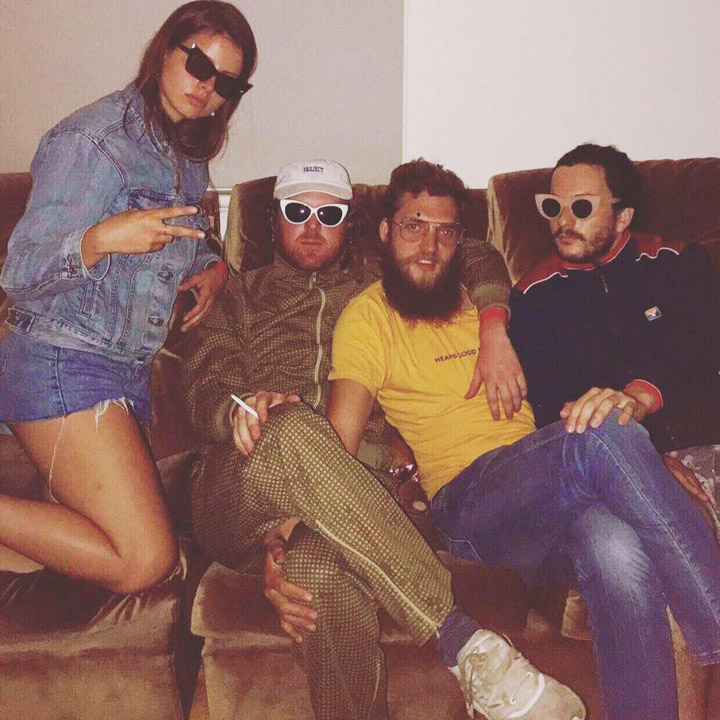 The band -- featuring Sam Hales on vocals/guitar, Cesira Aitken on lead guitar, Andrew Dooris on Bass Guitar/Backing Vocals and Keelan Bijker on drums/trombone -- met in Brisbane at Mansfield State High, and since their first performance in 2011, they've released two EPs (The Jungle Giants, 2011 and She's a Riot, 2012) and two studio albums (Learn to Exist, 2013 and Speakerzoid, 2015).

Quiet Ferocity combines the signature melodic arrangements of their first album with the percussion-laden production of their second and catapults them into asonic stratosphere that is entirely their own sound.

"After Speakerzoid I didn't write for a while," Sam says. "I needed to figure out what I wanted to do. I had to get out of my head. Then one day I was in the pool. It came to me, and I made this conscious decision. I told the band I wanted to make banging indie rock. I wanted to make a strong record that I would be happy to play live."

But it wasn't always that easy. Before Speakerzoid, Sam was having trouble writing. He went to Paris on a writing trip, but instead of writing he just spoke to himself out loud. He asked himself what he was doing and because he couldn't write he began to read. He read a piece on creativity by Ernest Hemmingway and felt like the piece was talking to him. "I learned so much on that trip I couldn't process it all," Sam says. "Then after Speakerzoid came out I remembered the essay and the notes I'd written. And I knew what I had to do." Sam worked five days a week, 9-5, and if something wasn't working, he moved onto the next song. "This was really important," Sam says. "When I clocked off each day I gave myself permission to stop thinking. It let the album breathe."

Quiet Ferocity brims with triumph, enthusiasm and, at times, pain. Recorded and produced entirely themselves, its strength lies in the amalgamation of its members, who have been making music together for so long they feel like family.

One of the main sonic identifiers on the album, "On Your Way Down" showcases the band's ability to combine simple arrangements with melodic intensity. "It makes you want to dance, but also clench your fists," Sam says. "When I wrote it I knew it was going on the record and everything else would have to make room for this song and nod towards it."

Already proving a fast favourite on Triple J, "Feel The Way I Do" combines charging dance hooks with a contagious scream-your-lungs-out chorus. "The song came from nowhere and I wrote it start to finish. I just had to get it down. It felt like a gift."

And then there's "Quiet Ferocity," the album's title track, with its massive bass lines that lead into the nostalgic hell-yeah chorus: 'when we get together/I forget the time' before right-turning into 3am eyes closed where-are-my-limbs-wait-I-want-to-kiss-you territory.

In their song "People Always Say," Sam says, "Initially, the song wasn't even going to make the album." He'd tried so hard he'd over produced it, but the band agreed there was something about it they liked. In the studio, they worked together and simplified it but something was still missing. So Sam pulled out a synth and began hitting different keys. Cesira and Keelan and Dooris would yell, "Yes!" and then "No!" They worked together until they were all screaming, "Yes!" and they knew they'd found the sound. It was a happy accident," Sam says. "But we had a lot of those, working together. It was awesome and validating, all of us being there in the studio on the same level. It's the deepest dance-driven song on the record and that's why we put it last. It felt like a full stop, like we'd built people up to the point where all we could do was say goodbye, until next time."

With over 50 million Spotify streams, shows in LA, New York, Toronto, Austin, Singapore, Kuala Lumpur and Jakarta, not to mention sold-out headline dates and appearances at all major Australian festivals, including a triumphant early evening set to an overflowing tent at Splendour 2016 and the recent 2017 Grooving The Moo where they played to capacity audiences around the country, The Jungle Giants have applied everything they've learned and produced an album laced with urgency and energy.