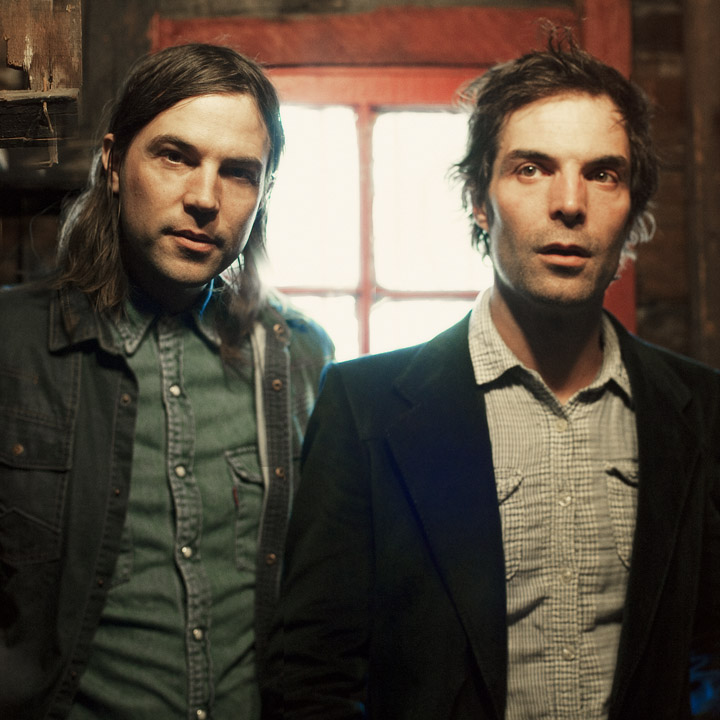 The Barr Brothers - Queens of the Breakers

"You just try to see the thing
for what it is
and what it is
is
a heartbreaking,
soulshaking,
overwhelming
exhalation."

To begin their third album, The Barr Brothers had to make some noise together. No plans or distractions, no preconceptions. No friends or strangers, label reps or engineers, no cellphone trills or city sound. No partners. No children. Not even any notebooks of lyrics - verses, choruses, chords preconsidered and plotted out. For the first time the band's three members - namesake siblings Brad and Andrew Barr, harpist Sarah Pagé - would go songless into studio. Empty-handed, whole-hearted, down miles of snowy road to a cabin on a frozen lake, a place full of windows and microphones and starlight and sunshine, with amplifiers in the bedrooms, their volumes turned up loud.

They spent a whole week playing. These were improvisations lasting hours at a time - noons and midnights, dusks and dawns, a chance to remember who they were and who they were becoming. Some of this was groove: patterns inspired by India, West Africa and 808 drum machines, deeper and heavier than what they'd tried before. Some of it came from Pagé's new inventions: humbuckers, Kleenex-box signal-splitters, hacks to make her harp into a versatile, sub-bass-booming noisemaker. But there was also plain old guitar - songs opened up by that big electric sound. Brad had asked, "How do we make music when there is no song?" The answer was this roaming, three-dimensional music, filled with nostalgia and experiments and rolling space, found on the fringes of Saint Zenon, Québec (pop. 1,1150).

The stakes felt high. The success of 2014's Sleeping Operator had taken the band from Montreal to Nashville to Milan, from the Newport Folk Festival to The Late Show with David Letterman. By now everyone knew the story of the American brothers who had decamped for Canada; how they had discovered Pagé by hearing her harp through a shared apartment wall. LP3 would be brought into a world where Trump was president. Where both Barrs were fathers. And where thousands of fans were waiting for the band's next volley.

Queens of the Breakers was born in three sessions at that cabin in the country, a place called the Wild Studio. Brad took those first free sounds and distilled them into tidal, seeking songs - stories of the way lovers and companions fall in and out of sync. More recording followed at Studio Mixart, in Montreal, and at the group's own boiler-room of a practice space. The result is this: 11 tracks of blazing courage and failing resolve; music suffused with low grooves and darting melodies, subtle breakages, the Barr Brothers' wide-open sense of the blues.

Some of this album takes place in the past. "Song That I Heard", with its memories of Brad's arrival in Montreal, the different ways he fell in love. Or Queens' title track, which revisits the Barrs' misspent youth - a gang of friends rambling through Rhode Island mansions, dressed in their mothers' dresses, wreaking small havocs. How many of our old friends do we still see? How many of those dreams came true? At times the sound's all twinkling, the score for a lost John Hughes film; at other times it's whetted, searching, like the stuff of Lhasa de Sela or Led Zeppelin's III.

The rawest reminder of Queens' first jams appears on "Kompromat", which bristles with rattle and riff, Pagé's kora-like harp. "I think we're in love with your abuse," Brad snarls at his homeland. "You got one hand on the driver's wheel / in the other a noose." On Queens of the Breakers' magnificent opening cut, "Defibrillation", the reckoning is softer - but not necessarily kinder. "Defibrillation" was built atop a drumbeat, something Andrew found at a hospital one Christmas night. Sitting with his mother, holding her hand - she had fallen, needed stitches - he observed a pair of heart monitors, each connected to a different, unseen person's pulse. They were beating together, then not, and not: parting and crisscrossing. He tried to memorize the pattern. Later, at home, he learned to play it on bass-drum and snare and tom. When he sent the beat to his brother, Brad sent back the beginnings of this: a song like a letter from a father to his son. "I just thought I'd save you some time," he offers, "straighten it out here / make it rhyme." Still, the singer's not peddling fake wisdom . For all its striving, "Defibrillation" is a letter without answers, a gesture into space, a lament for the dither that exists between every human being.

It's this tension, this dither, that lives at the centre of Queens of the Breakers. Three players - friends, comrades, music-makers, all of them trying to play in sync. Three bandmates - each of them fumbling, remembering, trying to invent something together. A band still playing, even occasionally reimagining, their rock'n'roll.