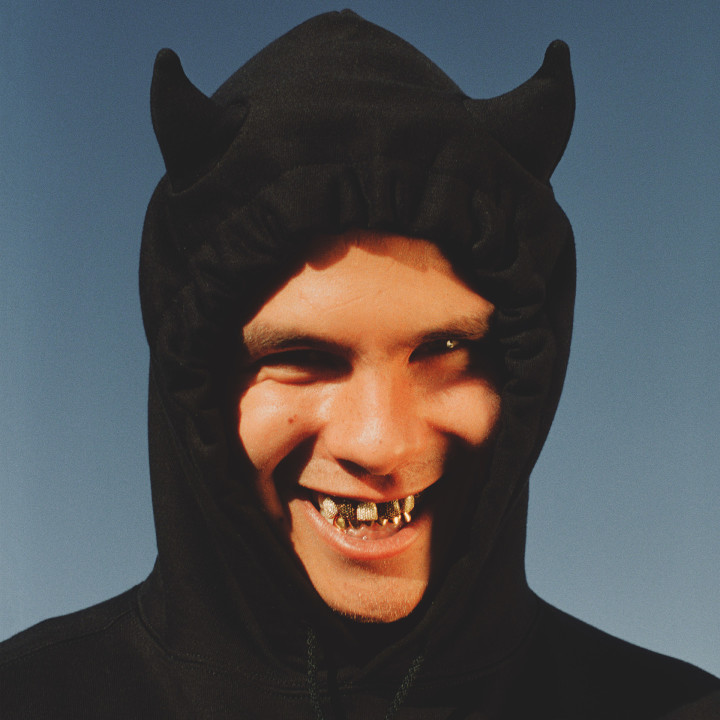 slowthai is starting a cult.

He speaks for and with a generation of kids who’ve been ignored for too long by the powers that be. But his cult isn’t driven by rage or nefarious intentions. It’s driven by a desire for freedom and happiness: freedom to be who you want to be, and the happiness that comes with that.

He wears his heart on his sleeve, and his town on his knuckles – literally: he has Northampton’s ‘NN’ postcode tattooed across his fingers. But being from a small town hasn’t hampered his ambitions. He wants to be the example that his peers follow to break out of the mindset they’ve had foisted upon them by a society peering down its nose.

And his message is growing in volume. Press from across the UK and the US continue to clamour for his attention, and slowthai’s name has gone from peppering ‘ones to watch’ lists to dominating column inches in titles including Pitchfork, The Fader, Dazed, The Guardian, Noisey, i-D, Crack and more.

Over the course of the past year, he’s released a steady string of releases, laying out the beginnings of his social manifesto: from the politically-charged ‘North Nights’/ ’The Bottom’ AA-side; to unpicking vulnerable and toxic masculinity on ‘Ladies’; living in the moment on ‘Polaroid’; and the stereotype-dismantling volley of ‘Drug Dealer’ and ‘Rainbow’. His music is unmistakably British, treading a line between grime, rap, dubstep and garage – riding rough edged beats with an adolescent charisma and confidence that recalls buzzy pirate radio sessions and handicam freestyles. All of this is encapsulated by live shows that are drenched in sweat and spit and booming with the sound of slowthai’s hooky flows and street-smart bars being chanted back at him.

These already-incendiary live shows have evolved too. As well as a sold-out tour of the UK’s major cities, slowthai’s music and message has taken him everywhere from sweatydrenched church crypts to festival stages, and the streets of New York for a showcase at MoMA PS1. For slowthai, these occasions provide an opportunity to connect directly with his fans and to open himself up to them. He spends his performances stripped to his underwear and absorbed by the crowd as he volleys his lyrics back and forth with them. But this rapid ascent hasn’t been without its hurdles. ‘Drug Dealer’ was turned down for airplay by Radio 1 because of its alleged glamourising of illegal activities – a cruel irony, given the song’s actual assault on stereotyping and its reductive effects. And ultimately this is what slowthai is about: breaking down and pushing beyond the limitations that others might impose on him and his peers.

His music takes in everything from discrimination – whether it be on grounds of race, gender, sexuality, appearance or any other prejudice – to political inequalities, self-worth, self-love, and the need to question society’s dominant narratives.

Next year, as Britain officially leaves the EU – deal or no deal – the country’s youth will be in need of a new collectivism. slowthai’s manifesto will be ready for that day. Another of his tattoos – ‘Nothing Great About Britain’ inked across his stomach – is the platform for slowthai’s declarations. It’s an old, punkish, perhaps even apathetic expression that takes on a new lease of life in his lyrics. For slowthai, it’s an acceptance that, no, things aren’t great, but this fires his belief that they can and should be better. It’s not pessimism, or vacuous naysaying. In fact it’s closer to the opposite. He sees himself as a voice emerging from an increasingly disenfranchised youth in Britain – but insists that his voice can only matter if it’s held in dialogue, echoing the thoughts and desires of his peers. ‘The Bottom’, begins with a monologue from long-time producer Kwes Darko/Blue Daisy: “It doesn’t matter where you’re coming from,” he says, “because all around the world there’s a ghetto, all around the world there’s a slum, all around the world there’s a hood, somewhere.” slowthai is speaking to the people finding their way in these places.