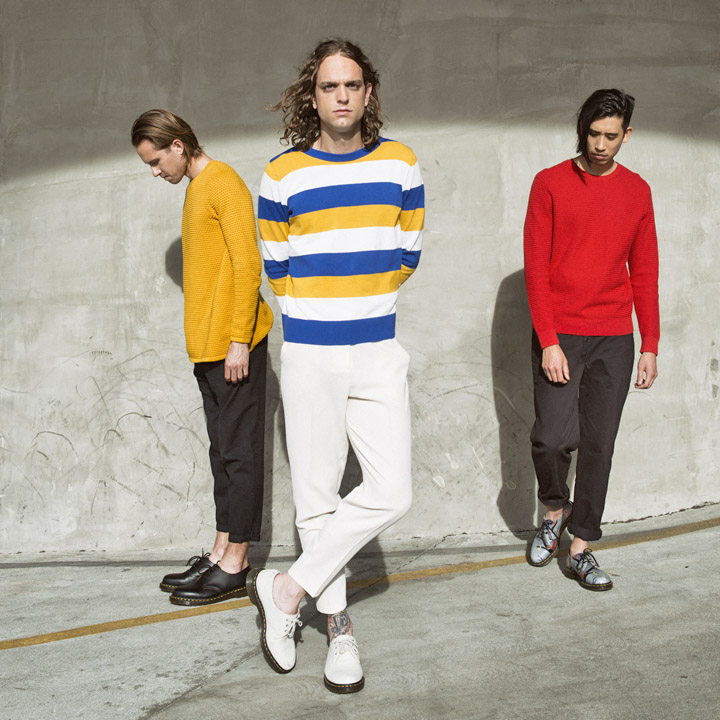 The triumphant lead single from Sir Sly's Don't You Worry, Honey, "High" turned a hotel-room panic attack into a creative breakthrough for the L.A.-based trio. "This album started out as an exploration of fear and anxiety, over very minimal electronic music, but 'High' really opened up the honesty of the record," says lead singer Landon Jacobs, who co-founded Sir Sly with fellow multi-instrumentalists Hayden Coplen and Jason Suwito. With "High" emerging as "an upbeat anthem about ego death," in Jacobs's words, the song ultimately formed the heart of Sir Sly's second full-length: a deliberately hopeful album born from an extraordinarily dark time.

Written in the aftermath of Jacobs's divorce and his mother's death, Don't You Worry, Honey transforms heavy-heartedness into unlikely joy. The album finds Sir Sly expanding on the moody experimentalism of their 2014 debut You Haunt Me, channeling a looser energy that closely shapes their more groove-driven sound. Self-produced and recorded in Suwito's studio, Don't You Worry, Honey also matches their delicately inventive alt-pop with a more granular approach to storytelling. "It was almost like writing a memoir of the past three years of my life, but focusing on little snapshots rather than telling the complete story," Jacobs points out.

Thanks in part to that purposely detailed lyricism, Don't You Worry, Honey hits with an undeniable urgency. "Musically and lyrically, we wanted this album to be very much in-the-moment and paint a specific picture with each song, as opposed to just setting a vibe," says Coplen. With that clarity of vision in place, Sir Sly experienced a profound burst of inspiration. "There were all these sounds and textures that I was hearing in my head so strongly, in a way that hadn't ever happened before," says Coplen. "There was never any effort to try to make things feel fresh or new or surprising -- that all just came from following our instincts and enjoying the process of bringing the music to life."

Throughout Don't You Worry, Honey, Sir Sly strike a powerful contrast by embracing both the thrill of creation and the wistful undercurrent of each track. With its shivering synth lines and graceful acoustic guitar, "And Run" reflects on the futility of regret. "That song came from being fascinated by the idea that, of all the infinite possibilities in the world, I ended up falling in love and getting married and then getting divorced, and there's nothing I could do to change that," says Jacobs. On "Astronaut," Sir Sly build off a majestic guitar riff supplied by Suwito and deliver an intensely danceable meditation on loneliness. "It's trying to put a different spin on being alone, because sometimes being alone can give you this great ability to see the world in a way that's larger than life," Jacobs explains. Inspired by an ill-fated romantic encounter at a festival after-party, the blissfully frenetic and beat-heavy "Trippin" perfectly captures the rush of instant infatuation. And on "Oh Mama," Sir Sly close out Don't You Worry, Honey with a hazy and soulful serenade to Jacobs's mother, a piano-laced piece that makes quietly heartbreaking use of a sampled voicemail.

Since forming in 2012, Sir Sly have forged their singular sound by drawing upon each member's long-honed musical talents: Jacobs's introspective yet infinitely searching lyricism, Suwito's in-studio ingenuity, and Coplen's sophisticated musicianship and sense of songcraft. Orange County natives and friends since high school, Jacobs and Coplen connected with Suwito through the local music scene. Their early collaborations yielded songs like "Ghost," a Neon Gold release that quickly earned buzz online. After making their Cherrytree Records debut with the Gold EP in 2013, Sir Sly put out You Haunt Me (which reached #14 on Billboard's Alternative Albums chart) in September of the following year.

With Don't You Worry, Honey marking a major turning point for Sir Sly, the band feels a stronger sense of artistic purpose than ever before. "As a person who mainly writes lyrics about himself, sometimes I get caught up in this fear that it's wrong or selfish to write so much about my own life," says Jacobs. "What snapped me out of that on this album was going back to the catalog of music that helped raise me, where the songwriters were incredibly honest about their lives in a way that normalized a lot of what I went through growing up. If I can do that for other people, by telling my story and not trying to sugarcoat it, then hopefully I'm able to help them feel a little less out of place in the world."