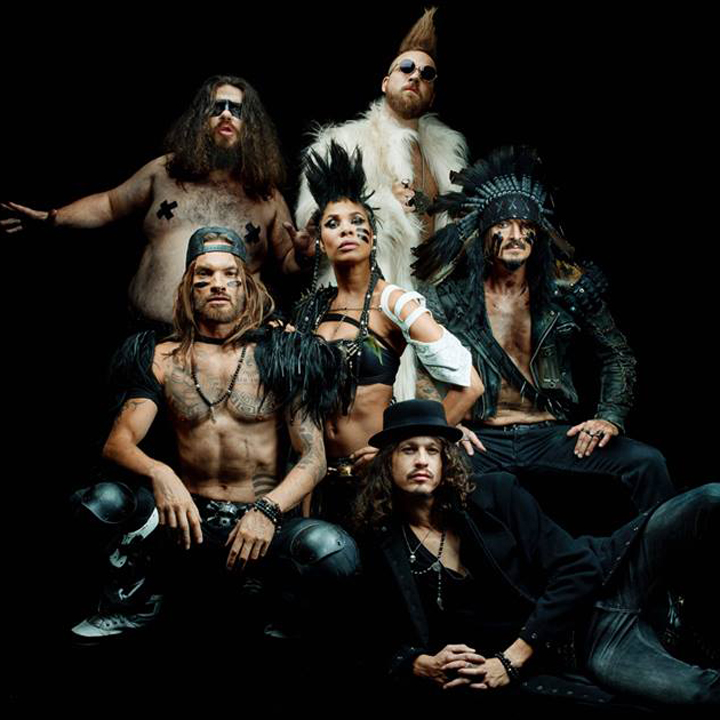 The Evol’ hints at “evolution”, but is also just a vowel away from alluding to evil. When flipped, the word becomes “love”. A reversible little coinage that has us mentally juggling several ideas, and is the ideal title for the sixth album of Shaka Ponk, a band which has always made a point of have its finger on the pulse of its era; and is intent on exploring its complexity, not just displaying its firepower.

Much has happened in France since their last public appearance in September 2015. Terrorist attacks, a state of emergency, waves of migrants. Plus a rash of acute crises – political, economic, environmental – which have forced us into a collective realisation regarding a specific situation: it’s an exceptional point in History where humans, in their evolution, seem unsure whether to side with evil or love – although things are obviously not straightforward. Hence the relevance of the title, The Evol’, which keeps the issues of our time finely balanced on its two-syllable tightrope. Thus explaining the array of moods and sounds on this hard-hitting and sometimes caressing disc.

Evolution-wise, Shaka Ponk haven’t been slacking these past two years. After the marathon tour (a million-plus spectators) that followed the release of the albums The White Pixel Ape and The Black Pixel Ape (200,000 copies), they first regained their strength. And then moved from western to eastern Paris to a new base, more spacious and self-contained: in this HQ, called La Factory, they set up their equipment and devoted themselves to music, video and graphic design. They have also kitted out the place to continue what underpins their unshakable unity: a human adventure now 13 years long. They celebrate this unity in the very first track, “Gung Ho”, which feels like a renewal of vows, in the manner of “all for one, one for all”. And in their new base, they could make use, above all, of an essential commodity they had previously always been short of: time. “We usually had to do everything in a rush – music, lyrics, artwork,” says singer Frah. “For this album, we took time to try out new things, new machines. We had a go at new approaches.” “Above all,” adds keyboardist Steve, “we took time to enjoy ourselves, whereas usually it’s really stressful.” They ended up shifting from punchy yet no-frills production to a sound which, though just as effective, better matches their expectations; “With this expanded sound, we’ve got rid of our respective frustrations,”  reckons Steve. “In any case,” says Frah, summing up, “we’d have kept at it until we had an album we were happy with – which is the case here.”

In this augmented sound spectrum, C.C.’s guitar, the bass guitar of Mandris, Ion’s drums, Steve’s keyboards and the voices of Frah and Samaha flourish separately while also further enhancing the terrifically tight-knit quality that remains their hallmark. But they still had to usher in the world: their own world, and the world whose chaotic course has left them dismayed and sad, prompting screams of rage or laughter. The recent terrorist attacks – events which, as Samaha remarks sadly, “have changed the way we smile forever” – yielded “Wrong Side”, a song about fanaticism in the broad sense. The most affluent people’s cynicism towards a planet in dire straits, and towards the future generations condemned to live on it, yielded “Bunker”. Their fight for the environment was already well known. In “Killing Hallelujah”, we get a taste of the commitment of some band members (Frah and Samaha are vegan) to the animal cause. In “Share A Line”, meanwhile, they share their concern about hard drugs becoming a mundane feature of teenage lives. And each track is an artfully staged sketch, thus avoiding any moralistic tone. They take aim at their contemporaries’ failings – whether the mob mentality in “Wataman”, domestic violence in “Fear Ya”, or the music scene’s occasionally bogus side in “On Fire” – and hit their targets. And they also know how to abandon themselves to their own exhilaratingly pure energy in “Gung Ho”, poke fun at themselves in “Slam” (featuring a hilarious rap written and performed by actor Edouard Baer), and take stock of their artistic identity in “Rusty Fonky”. What’s perhaps more amazing, for a band with such an emphatically hard-core reputation, is to see them compassionately portray the bruised character in “Faking Love”, to bring a young fan back to life in the super-folky “Summer Camp”, or to lay bare their existential soul-searching in “Mysterious Ways”, their first-ever ballad. It’s a sign that, beneath their bulletproof metal armour, this one-of-a-kind band – with its raging expressiveness and cathartic fury still intact – can also address delicate topics and take a stance on hot-potato issues. A sign that The Evol’ is not just their musically richest and most accomplished album, but also the most mature in human terms.