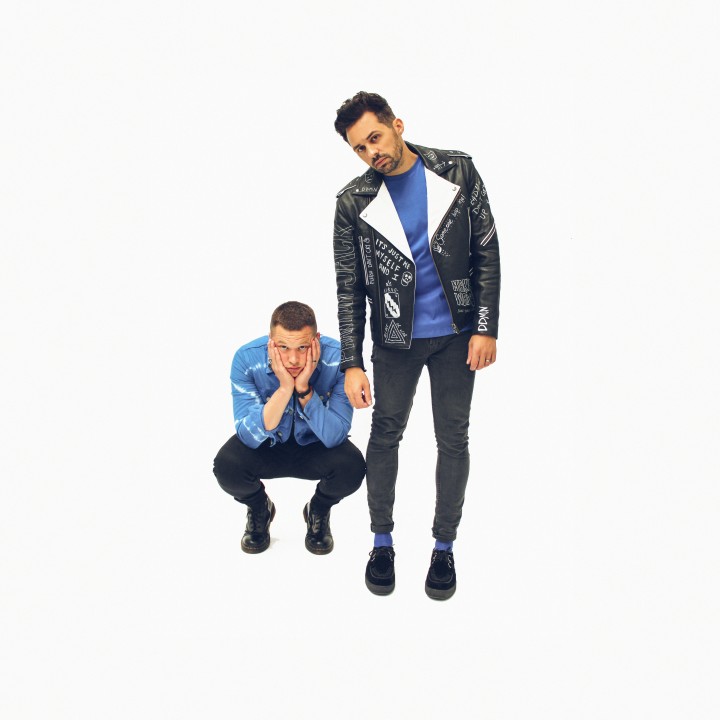 There’s nothing quite like the bond between siblings. It’s a deep friendship, forged by shared interest and experiences, that can also survive the most heated arguments. There’s camaraderie and competition. This bond is what’s at the heart of Saint PHNX - the Glaswegian duo comprised of brothers Stevie and Alan Jukes.

Shades of Imagine Dragons, Kasabian and Royal Blood weave their way through Saint PHNX’s sound, but this duo are unique. A big helping of attitude, a willingness to experiment and a knack for writing rousing choruses ensures they make enough noise to rival a full band, and they’re not afraid to get real in their lyrics, even chronicling the setbacks they’ve had while climbing the ladder in the notoriously tough music industry.

“The song ‘King’ relates to a time we were trying to progress. In previous bands, doors were closing in our face time after time, and people were telling us we weren’t good enough,” remembers Stevie. “One day I’ll be king, that was the punch line. But that can be for anyone who wants to be the best they can be."

Alan candidly echoes his thoughts. “It’s the struggle of coming from nothing and trying to get somewhere; you do get laughed at and rejected,” he says. “We’re talking about the music industry but it could relate to someone else’s experience on a completely different subject, because everybody’s got their own struggles. You have to overcome them.”

The refusal to pigeonhole themselves into writing only about personal topics means their lyrics will burrow into the mind as much as their persistent riffs and stadium-ready choruses. and the negativity they encountered at the beginning of their musical careers did nothing to deter them from chasing their dream of playing the biggest stages possible. They aimed for the top right from the start writing big songs with stadium ready productions - all made in their shared studio in the outskirts of Glasgow in a former trade union building.

With only three songs out at the time attention soon came to the brothers as their second track 'King' was being played on US radio and they received a call from the Imagine Dragons manager asking them to support in London. “The pressure was on as we had only done 10 shows before that and we were on a big stage with one of the world’s biggest bands,” Alan remembers. “We rehearsed every minute of every single day to make sure we were spot on and that we held our own!” the reactions to the gig in person and on social media proved they did on one of their biggest shows to date.

“We’ve probably got enough material – we’ve got a lot of tracks but we’re in the process of writing more at the moment,” says Stevie. “I think what we’d like to do is release a couple more singles, then hopefully we’ll have the guts of an album to release in the next year or so.”

There are plenty of opportunities for Saint PHNX to hone their craft in the meantime; they played at Reading and Leeds and V Festival and embarked on their own headline tour in September 2017. In the short year that Saint PHNX has existed, many goals have already been achieved, and while Alan and Stevie might be loathe to admit it, it’s their brotherly bond that’s spurred their whirlwind career forward.

“It’s tough being in a band with your brother, it’s a love-hate relationship,” says Alan. “It’s always competition to see who’s the best. It doesn’t matter if Stevie’s right or I’m right, it’s competition for the sake of it.". Stevie's response "the only reason Al is in the band is because our Mum asked me to give him a job."