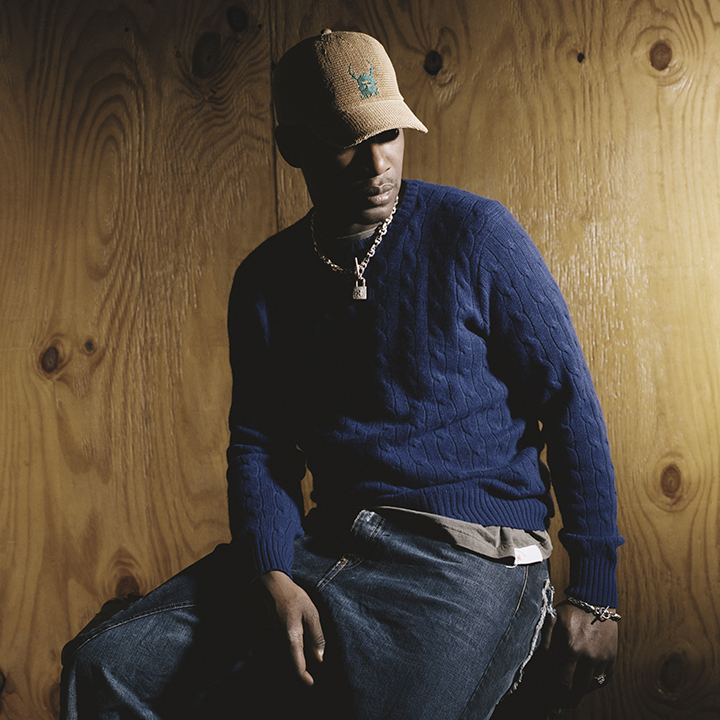 "Slime & Reason" -- the conflict between doing what you want and what you know is right. It's a simple idea but perhaps one that goes to the heart of Rodney Smith's work and creativity, the basic tension that drives him.

Rodney Smith was born and grew up in Stockwell, South London. His grandfather had come over from Jamacia in the fifties. As he puts it, his family "were here to make it big time." They worked hard, went to church, tried to live life the right way. His father was a lay preacher and tailor, a combination which goes some way to explaining the son's preoccupation with the soul and the suit. As Rodney sees it now, "my family are such good, decent people. I'm the runt of pack." The runt found music.

An avid but secret collector of the soundsystem tapes which were easy to find in Brixton at the time, Smith studied deejays like Eek-A-Mouse and Asher Senator, nodding to the rhythms, stretching his mouth around their words. But it was perhaps only when he heard hip hop and, in particular, the incomparable Rakim, that he realised that his voice could be used for more than toasting, that it was an expressive tool limited only by his imagination. But opportunities for Black British musicians in the nineties were few and far between. Hard work -- his own kind of hard work -- was the only way forward.

Smith made his recorded debut in 1994 as part of IQ Procedure through Suburban Base's short-lived hip hop imprint Bluntly Speaking Vinyl. He debuted as Roots Manuva the same year on Blak Twang's "Queen's Head" single, before releasing his own single, "Next Type of Motion" the following year through the same label, the hugely influential Sound of Money. 1996 saw the release of his collaborations with Skitz ("Where My Mind Is At"/"Blessed Be the Manner") on 23 Skidoo's Ronin label. The release of "Feva" on Tony Vegas's Wayward imprint followed in 1997. This was also the year that saw the first releases from Big Dada, a collaboration between Coldcut's Ninja Tune label and hip hop journalist Will Ashon. Ashon had tipped Smith as the "Most Likely To..." back in '95 and soon came knocking asking for a single. Roots replied that he was tired of making one-off singles and would only sign to do an album.

In 1998 he joined the label and the following year released his debut, "Brand New Second Hand." At the time, Rodney couldn't see what he was doing. "It's only now I'm listening to Brand New Second Hand and thinking, "Wow, that's a really beautiful record." It's only now! I wish I coulda understood it at the time! I just thought "I can do what I want. Only 1500 British hip hop fans are gonna hear it anyway." That's the basic sentiment I've tried to tap into with all my records."

From an initial 3000 records put into the shops "BNSH" has now sold over 60,000 copies in the UK. It also made the first dents in the wall of complacency and indifference which has often greeted home-grown Black music in this country, with The Times declaring that "his is the voice of urban Britain, encompassing dub, ragga, funk and hip hop as it sweeps from crumbling street corners to ganja-filled dancehalls, setting gritty narratives against all manner of warped beats." Manuva was rewarded for his breakthrough with a MOBO as Best Hip Hop Act that year.

Big things were now expected of Smith and he delivered with 2001's "Run Come Save Me," the record which gained him a nomination for the Mercury Music Prize and which has sold well over 100,000 copies in the UK (certified gold). More importantly, it spawned the all-time classic "Witness" (voted the greatest UK hip hop tune of all time by the readers of Hip Hop Connection) on an album that ran from the broad, swaggering pop of "Dreamy Days" to the dark, odd meditation of "Evil Rabbit." It is also the record which led the Guardian newspaper, in October 2003, to proclaim Manuva fifth in their "40 Best Bands In Britain" feature, proclaiming that "his influence is incalculable and he opened the doors for the Streets, Dizzee Rascal et al." That influence also stretches to the Arctic Monkeys, who are on record as saying that "Run Come Save Me" was almost all they listened to whilst recording their debut album.

"Awfully Deep" followed four years later, a more focussed, more ornate and fully-produced piece of work, and once again hugely acclaimed on its release. The album entered the national charts at 21 and, in "Colossal Insight" and "Too Cold," was bookended by two Top Forty singles. Smith remains bemused by its reception, though, and in particular people's tendency to take his lyrics a little too seriously. "A lot of the jokes and humour of "Awfully Deep" went over people's heads," he explains. "I'm less concerned with trying to be Mr Stand Up reflecting on life this time. I was pretty disturbed by the misinterpretation of the last record!"

Nevertheless the record, the sell out shows at Brixton Academy, his contribution to the Gorillaz album and tours that came soon after, all established Roots Manuva as a major player in UK music, and one with almost unique longevity in a genre in which people usually produce one or two great albums and then vanish.

Since then, Rodney has been keeping busy: "I had my stint of being a DJ/selecta. I had my stint of messing around with DV cams thinking I'm going to be the first director to make a movie straight from DV cam to DVD to the theatre. And I've been trying to do the right thing, trying to be a daddy." But it hasn't stopped him making music and now "Slime & Reason" becomes him fourth full album, a marvellous, freewheeling summation of his career so far.

The inspiration for the new record came from looking back to his roots, the music that had moved him even before he heard hip hop. "With this record I was trying to tune into that old Channel One, Studio One aesthetic. Smoky rooms, just the vibe of it. Lord knows what they were drinking, smoking or eating or what they were doing or what was on their mind but to me that was a special period in music. Today, with the technology that's available it's pretty easy to make generic music, music that sounds like everything else. But to tap into a unique aesthetic, to make a long player that is of its own world is a harder job. How do we make it have an individual sound?"

Rodney Smith's answer is the same as it's ever been. "What I'm always trying to tap into is that you wouldn't have reggae if you didn't have these people from the Caribbean trying to reinterpret the soul and funk they heard on American radio. I'm trying to do that all over again. I'm trying to stretch the template."

Roots Manuva sums up the fearless approach which means he continues to be one of the most vital, exciting, honest artists working in the UK today. "You got to sing like no one's listening." He pauses, searches for a way to expand on this, smiles as he thinks of one. "You gotta fart like there's no one there to smell it!"