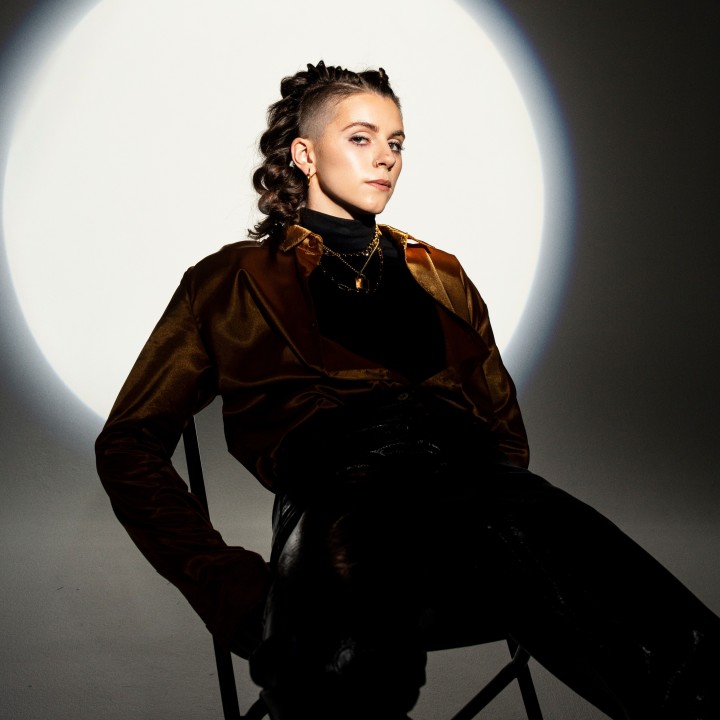 Personal strength materializes at just the right time. Ultimately, life’s circumstances and challenges prompt perseverance. Internal power fully and outwardly awakens for PVRIS frontwoman, multi-instrumentalist, songwriter, and producer Lynn Gunn on her third full-length album and 2020 debut for Warner Records, Use Me. She channels the ups and downs of an unbelievable two-year journey into pop conjurations of glitchy beat-craft, airy guitars, and spell-binding vocals. In doing so, she steps into a new chapter earmarked by focus, fire, and fearlessness manifested loud and clear.

“I’ve tapped into parts of myself I had shrunk for so long,” she confesses. “They’re the parts I was afraid to show and things I was scared to admit. External circumstances weighed me down, and I didn’t allow myself to speak up in my relationships. I was fucking tired, but I didn’t want to be trapped anymore. I was always strong and in the power seat, but I had to own it externally. I made a decision not to shrink myself again and to truly be seen for the first time in my art. I was finally able to take ownership for the things I’ve done and continue to do as PVRIS. It was a new era for me.”

A lifetime devoted to music set the stage for this realization. Growing up in Lowell, MA, Lynn taught herself drums, guitar, and bass by sneaking into her brother’s bedroom in grade school and playing for hours on end. Eventually, they started jamming covers together, but she had already developed quite a bit of proficiency on her own. During computer lab at school, she discovered production and recording software, tuning out the day’s lessons in order to tinker with her very first beats. This process carried over to PVRIS, which she officially formed in 2013 joined by band mates Alex Babinski [guitar, keys] and Brian MacDonald [bass, keyboards]. A year later, White Noise inspired a growing fan base and scored a silver certification in the UK. Meanwhile, 2017’s All We Know of Heaven, All We Need of Hell bowed in the Top 5 of the Billboard Top Alternative Albums Chart and ushered their stream tally past 220 million by 2020. Over the next seven years, they performed everywhere from Coachella, Lollapalooza, and Reading & Leads to Jimmy Kimmel LIVE! in addition to supporting Muse, Fall Out Boy, and 30 Seconds To Mars in arenas and selling out headline dates worldwide. At the same time, Vice, The New York Times, Medium, Rolling Stone, Billboard, and more extended praise. Advocating for the LGBTQ community, she supported organizations such as The Ally Coalition.

As Lynn embarked on her next musical chapter, life presented a series of trials and tribulations.

Experiencing vocal problems, stage fright, and severe pain in her back, ribs, and joints, getting on stage required all of the strength she could muster throughout 2017-2018. She even almost had to cancel the biggest tour of PVRIS’s career, but soldiered on. After visits to urgent care facilities and ENTs in various states on the road and numerous doctors, a rheumatologist diagnosed her with Ankylosing Spondylitis -- an autoimmune disease. Her health only deteriorated further though. A year later, she found out she also suffered from another autoimmune affliction: Crohn’s Disease. Facing health and vocal problems, battling through choppy industry waters, reconfiguring her professional support system, and the dissolution of a long-term relationship, she transferred the pain and power into the next chapter of PVRIS on Use Me.

“The title encapsulates the entire experience,” she elaborates. “I was exhausted, and I felt like shit all of the time. My whole life flipped upside down in so many areas. For so long, I’d opened myself up to being used and always had trouble setting boundaries in all areas of life. I knew I was strong; I just didn’t show it like I should. When my health problems worsened, I really had to. It’s always been a battle to figure out how much is too much for me, but I always push through. It made me actualize my strength, resiliency, and toughness. I turned the hardships into lessons. It was about taking action.”

In tandem with this realization, she made a very personal and important decision. For years, she remained in the background too shy to take all of the credit for the vision of PVRIS and her role as its sole architect for the songwriting, presentation, much of the production, merch, and visual video concepts. After emerging from the darkness, she became ready to shine a light on who she is and what she does -- like she should’ve a long time ago.

“I allowed myself to support a narrative I thought I had to support of PVRIS being a band,” she confesses. “I didn’t really have a role model for this. Coming from a ‘band culture,’ it’s about how the group is always greater than the sum of its parts, and you’re not supposed to take credit, even if you do everything. There’s no template or role model for really owning it as a woman. I wanted to make everyone else happy and uphold an image I thought we had to. Growing up, I learned I don’t have to do that anymore. I’m finally allowing myself to take credit. I’ve got the full support and encouragement of my bandmates. PVRIS is a unit and very much a team, but the heart and soul of the vision and music always has sourced from me. I’m just saying it now. I fulfilled my own vision of what a role model should be.”

Writing and recording all of 2019, she found the perfect collaborator to bring this to life in JT Daly [K. Flay]. With Lynn writing, cooking up beats, playing guitar, drums, and bass, and singing, he amplified and augmented her vision and versatility in the studio.

“He could bring the aggression out,” she smiles. “A lot of the resentment and pressure bottles up, but he helped me translate it into the music. We’ve always tried to make catchy pop songs and mask them with impactful production. We just found a new lens for PVRIS together.”

The aperture for this lens opened on the five-track Hallucinations EP. The lead single and title track “Hallucinations” clocked 10 million total streams in a few months’ time and paved the path for the album. Flashes of synths cast shadows over a simmering beat as Lynn’s voice careens from breathy verses into a bold and bright refrain.

“I had this book called Hallucinations,” she recalls. “The author details different types of hallucinations, why people hallucinate, and all of these theories. It explores whether it’s something external you can see, or if it’s internal. I was drawing on these ideas and trying to paint a picture with the song.”

Meanwhile, an off-kilter rhythm and synth buzz reverberate under scratchy verses on “Dead Weight.” It slips into a neon bass bounce on the hook punctuated by warbled screams, handclaps, and robust guitar. Co-written with Nate Cyphert [Bebe Rexha, Florida Georgia Line] and Tommy English [Kacey Musgraves, K.FLAY], it crystallizes the revelation at the heart of Use Me. “The day before the session, I got a psychic reading,” she says. “My psychic has been spot-on every year in the past. This time, she was like, ‘Get in your power seat. Take credit for what you’re doing. Step up. It’s time.’ She recognized how much I try to give and take care of everyone around me. She was right. I had to shed my old skin and step into this new and empowered light.”

Then, there’s “Good To Be Alive.” A distorted riffs ebbs and flows between electronic snaps as her intimate vocals give way to a bold and biting refrain, “Is this body even mine? Feels good to be alive, but I hate my life.”

“It’s about auto-immune disease,” she sighs. “I’ve done a lot of inner work on myself emotional and physical, and I’m finally in a place where I feel like life is cool. It’s stressful, but it’s not do-or-die anymore. It feels good to be alive, yet I hate being sick. So, I crack jokes about it. It’s something I’ve never shown people in my songs.”

In the end, Lynn shows herself like never before on Use Me and defines PVRIS.

“When you hear this, I’d love for you to understand where I was and what I was going through,” she leaves off. “For as tough as it was, I’m stronger than ever -- I’ve always been, but I’m finally embracing it. If you get anything from it, I hope it’s strength.”