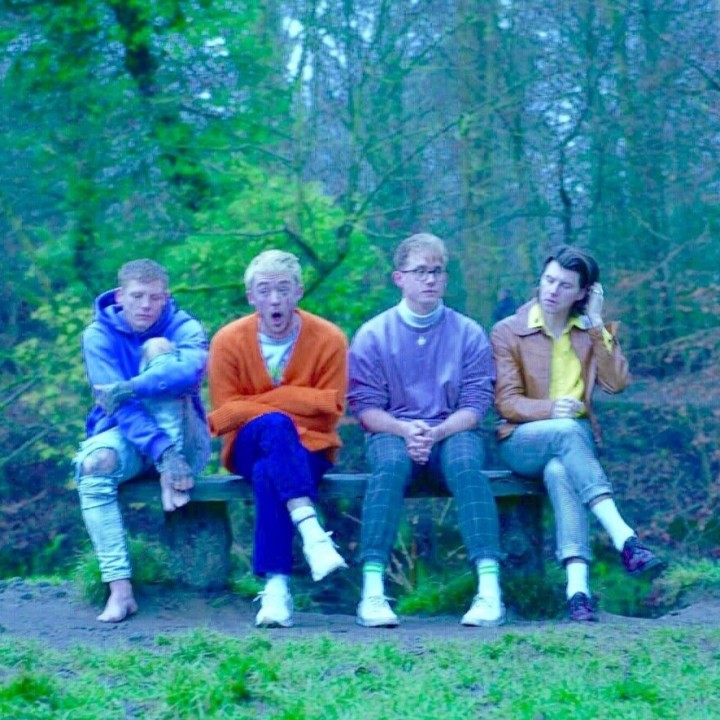 "Have you googled Push Baby? It's horrifying."

That's exactly what the UK band -- Jake Roche (vocals, guitar), Charley Bagnall (guitar), Danny Wilkin (bass, keys) and Lewi Morgan (drums) expect to hear any time someone looks up their name. "No matter what we do we just want people to feel authenticity. Even with the name. People are going to love it or hate it, but at least it's self-aware" says Jake. "'Baby' is the most overused word in pop, so we're upfront about what this band is coming out of the gate."

This may be your first time hearing of them, but Push Baby is no stranger to the industry. In their past musical life, the four musicians made up pop band Rixton -- known for their 2014 smash "Me And My Broken Heart," which hit number-one on the UK Singles Chart. Despite that early success, the band wasn't satisfied with the image they had presented the world. They had achieved the dreams of many, but it wasn't exactly as they had hoped. Rixton just wasn't them. As things began to slow down shortly after the release of their debut album, the band disappeared into a collective mourning period. They lost their confidence, and the insecurity was paralyzing. They stopped creating -- in fact, they stopped everything. The band went totally silent.

Four years later, Push Baby emerged. Thankfully, that period of stagnation gave birth to a creative metamorphosis. The band is now ready to deliver their most honest work to date. So honest, in fact, their lead single "Mama's House" cleverly tells the all too familiar story of a young adult finding himself back under his mother's roof after a brief tryst with independence. Although, in this case, that independence also included a couple of world tours. The track's bridge confidently paraphrases a conversation between Jake and his mother. "I'm grateful every day you let me stay without paying my way. Right now, I can't afford it, but I swear to God one day I'm gonna pay the mortgage" he sings. On this same track, Jake hilariously pokes fun at himself and the London elite by joking "I go to Shoreditch House, take a shower in the gym. My membership ran out, so I call Ed to get me in" alluding to his friend and former tour mate, one Ed Sheeran. If only all frontmen were this straightforward.

"We're telling real stories" muses Roche. "We were away for years, and I come home to everyone thinking I'm now rich and famous. They think I'm getting all kinds of free stuff and living an amazing life. In reality, we're back to square one."

For this band, square one looks pretty damn good. Armed with unmatched conviction and a wicked sense of humor, Push Baby holed up in the northwest of England and poured everything into their self-made music and delightfully puzzling visuals. In the "Mama's House" video, we find the band in a dystopian imagination of one's childhood home, filled with shocking references to pop culture -- including the band's infamous manager Scooter Braun. The visual for their fresh take on ballad-style storytelling, "Wasted Love," turns that universe on its axis, showcasing a brighter, merrier version of the same disturbing scene. At one moment, we even see Jake swinging over green hills in a wedding dress singing of a love that never was. Push Baby is doing it their way, and loudly.

To be clear, this is not a comeback. While the band is comprised of all original members, they very much consider this a debut. Their first visual, The Running Jump, is an announcement of the dramatic rebrand to fans of the musicians, but appears as a trailer for a newly formed band to the unfamiliar. In the short clip, we see Jake set himself on fire at the edge of a diving board and literally -- and metaphorically -- dive into the unknown. And yes, he does his own stunts.

"We're giving listeners the truth," Jake concludes. "The truth can be funny at times. It can be scary at others, but it's always real" he grins. Push Baby is brutal honesty with a smile, and they're daring you listen.

"And hopefully by the time anybody is reading this," Jake teases, "The search results for Push Baby will be more than just women giving birth."