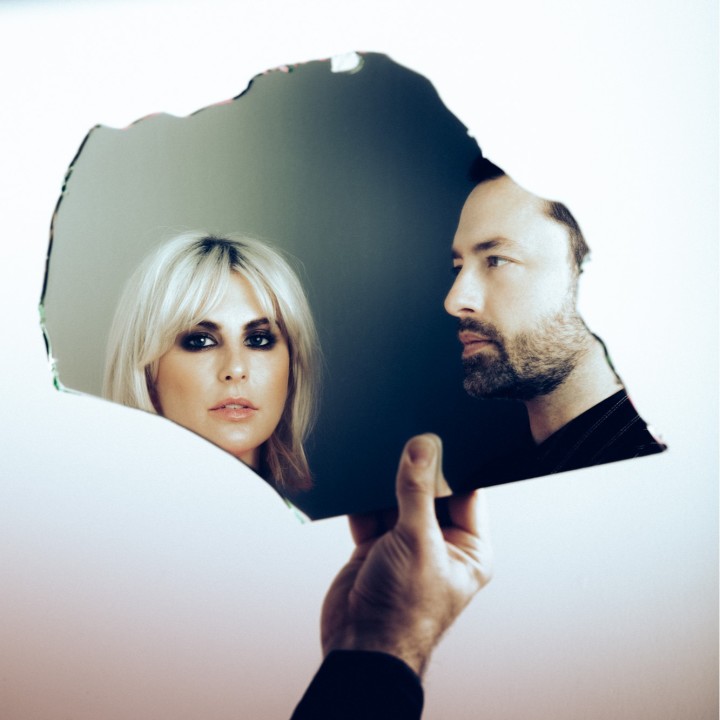 In the relaxed confines of an Echo Park home, two life-long best friends hang and talk music – their own music, other people’s music, but largely just music, all day, every day. Phantogram amounts to the twin brains of Sarah Barthel and Josh Carter. Everything they do comes from that kindred force, that connection, that place of inexplicable chemistry, humor, spark, joy and mutual respect. As a musical duo, they only ever make sense in the context of platonic love. Their songs are rooted in it, even the ones that sound dark and pensive.

The pair were based in New York City for most of their career but had relocated to LA at the time of releasing their most commercially successful record Three in 2016. That album hit the Billboard Top 5, received big syncs and saw them perform again on late night TV. It took them to Madison Square Garden playing with Alt-J and around the world opening for Muse and on their own headline tours, building upon their already rampant fanbase. When it came to the follow-up, for the first time they made it entirely around Los Angeles, spending a week at Rancho de la Luna studio while recording the bulk of the album at Sarah’s new home studio (previous albums were made at Harmony Lodge in Upstate New York).

Lauded as an experimental and alternative band, and one that’s never been married to a particular genre, they didn’t become intimidated by the success of Three. Instead, they took more time than ever and rooted back in the ideology behind that which made them form Phantogram ten years ago: delight, escape, hunger for knowledge and answers to life’s deepest questions. Barthel bought a house in Laurel Canyon and created a studio there. Together they built a new community of collaborators all neighboring locals and creatives (the likes of Billy Corgan, Ilan Rubin, MNDR, M83’s Morgan Kibby, Dan Wilson, Stella Mozgowa, Sounwave, Electric Guest).

The experience made them a lot less insular. It didn’t change their approach too much, but during a time of inactivity it gave them confidence and reassurance that Phantogram has a very significant place in the world. “Making this new album was more of an anti-commercial thing,” says Carter. “We went back to our roots. We had fun. We did whatever we wanted – not that we didn’t before - but we shut out the noise.”

The result is Ceremony, their fourth, most diverse and liberated record yet. The process for the album began in summer of 2018, after several years of touring the world in support of Three. Both Josh and Sarah were finally forced to come to terms with Sarah’s sister, Becky’s, unfortunate death due to suicide. Barthel says, “When Three was finished, I thought the weight of sadness and anger would release after finishing recording. Boy, I was wrong. Performing those songs every night was like reliving the feelings over and over again. After that tour, I was completely drained and spent. After 10 years of being in this band and pouring my heart into everything that is Phantogram, I felt like I didn’t have anything else. I think life was put on hold for a long time for Phantogram. Going through the loss of my sister from suicide was the icing on the cake.”

She continues, “After Three, it was a time to reflect in a way we never had before. Life after losing someone from suicide is very confusing. Performing those songs every night kept us stuck in that one moment. It didn’t allow us to move forward and grow as people. When tour was over, we had to step outside of the Phantogram bubble and face real life. It almost felt like we were in survival mode. Ceremony was inspired by self-care and seeing how common of a struggle everyday life had become.”

Ceremony’s title came from the song of the same name – a trip-hop, low-slung celebration that explodes into a psychedelic freak-out. That song reaches every emotion and aura Phantogram have ever strived for, and it encapsulates the idea of their own music as a near-religious experience. “We loved that word and the thought of ceremony,” says Barthel. “Ceremony is what Phantogram is to us. Everyone has their own ceremony and they don’t have to relate to anyone else’s, but Phantogram is our ceremony: our process, our ritual. Playing shows is our ceremony for everyone. And for us.”

A testament to the limitlessness of Phantogram’s own holy reckoning is that no two songs on Ceremony are in the same vein. “In A Spiral” sounds like a rave in a country saloon bar; “Mister Impossible” is a trip-hop ballet; “Dear God” is a funky soul reverie; “Into Happiness” is pop psychedelic magic. “There’s always been a common thread of existential crisis in our music,” says Carter, searching for an explanation. He talks like someone whose creativity stems from raw human instinct, and therefore can’t always be rationalized. The lyrics on Ceremony are abstract. Some of them mean nothing at all or don’t reach a particular conclusion. And still, you feel the way they carry the rhythms over the tortured tension and ecstatic release. “Overall, our songs are really about the human condition of living and what it feels to be alive, to love and to die,” he says.

It was typical for the pair – going through all the ideas they’ve had floating about throughout their band life, trying to figure out what ones they’d develop and where new influence hit. They bedded down in past inspirations such as Godspeed You! Black Emperor, Mogwai, Massive Attack and Outkast. They got as psychedelic as they ever have. They really channeled the DIY aesthetic and ethos that stoked their initial forays into music but now bolstered by all the musical nous and knowledge they’ve accumulated over their time spent as touring artists.

Carter and Barthel’s admiration and adoration of one another has never waned. But there is a new energy to them for 2020. They both seem to be in a place of re-birth and appreciation for themselves and their always building fanbase. Particularly, Barthel is just unpacking the extent to which the “ceremony” fits with her current mindset. “Our bond has everything to do with it,” she explains. “It revived me and refreshed me and allowed me to look at what we’re doing in a different light. We’re not just a band who writes songs and tours. It’s deep. There aren’t that many bands that stay this relevant for so long and for being so close. It has everything to do with that.”

For Carter, the experience has filled his cup to make more. He’s already brewing ideas for the follow-up to Ceremony. “We know we’re gonna keep creating music and it’ll be the same thing over and over again until we hang up our hat.” He pauses. “I don't see us ever stopping.”