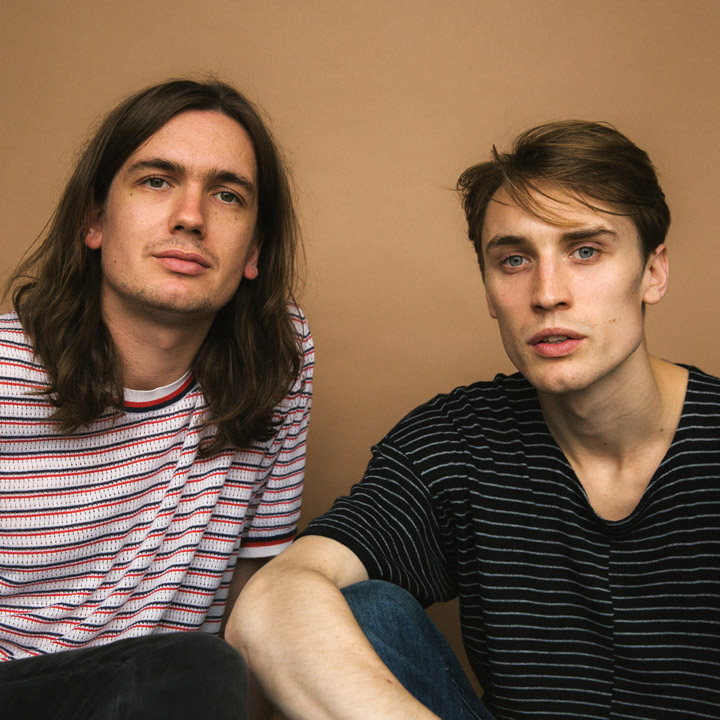 Otzeki is a project built around balance and duality. Nowhere is that more apparent than in the yin and yang of its members, cousins Mike Sharp (vocal, guitar) and Joel Roberts (keys, Ableton). Although the name might be just a combination of letters that didn’t exist on Google until they came up with it, Otzeki is the intersection where Mike and Joel’s interests meet in their mutual enthusiasm for the potential of electronic music.

Neither Mike or Joel felt they belonged where they grew up (in Stamford and Cambridge respectively), but say life began to make a lot more sense when they relocated to London. Joel describes Mike as an overthinker with an imagination like no one else he knows, a difficult person worth getting to know. Mike says Joel is incredibly intuitive with a talent for making things clear in spite of the chaos.

In 2014 they experienced separate, but synchronised, spiritual awakenings in Berlin. They had ventured to the Techno capital separately, both unaware that that they were there the same week and even at the same club on the same night. “I was really ill for a period and Joel has always brought me back to earth, so we met up in London,” explains Mike, “We were both a little bit lost in terms of knowing quite what we were doing, then after Berlin everything changed.”

Joel had just quit studying acting after a year and a half and they both desperately needed something to focus their energy into. Joel came over to Mike’s place armed with a drum machine and played him some of the music he had been programming. Mike sang over it and, though they were initially unsure whether combining their individual styles would work, they were both buzzed with the results.

They began a near scholarly exploration of electronic artists, taking in the work of Ricardo Villalobos and Rhadoo along with his Romanian influences and preoccupation for a more sound design based approach to composition. “Joel was really into partying and collecting records and DJing and we’d go to a friends party, Damaged in Dalston, and to forest parties,” recalls Mike of that time, “You’d hear music that was not only leftfield but could only really be played in public unless everyone was fucked because no one would listen to it otherwise.”

The result is their uncompromising debut LP, Binary Childhood. It’s an album driven by rhythm, that takes their previous use of electronic loops and infuses them with more organic sounds and live percussion. An exercise in the dark arts of electronic music, the album delivers a kind of controlled raving that’s served with a side-order of something subtly sinister and, despite their insistence that they’re not academically inclined individuals, is packed with cerebral songwriting.

Exploring the progressive nature of electronic music that actively avoids rigidity in favour of being what they call “expressive”, is a priority for Otzeki. “A lot of the reason people are not expressive through electronic music is because they’re putting it through software and playing it through a grid,” says Mike. “It’s not that different if you’re writing a piece of pros and you know that whatever you’re writing it has to fit in a certain amount of words, but when you’re writing it you already know that you’re running out of words and you can’t quite get out what you want to say.”

Written partly in rehearsal rooms and partly in the studio with the help of avant-garde producer Adhelm. The studio provided fresh opportunity for Joel’s meticulous attention to detail, even though this was something Mike found extremely prohibitive and at odds with his preference for a more freeform creative process. The improvisational methods and stream of consciousness writing that they experimented with on their debut EP Falling Out, are still present here. That debut EP and follow up singles have seen them pick up support from Radio 1, 6music and Radio X and a growing fanbase via tours across Europe and the US.

“There were two songs that were originally on the album which got axed and we introduced some other things and it changed the whole dynamic of the album. We wrote a concept album and then we took two chapters out of that book and put in some short stories that were from an old novel. The album that you’ll listen to is different to the one we initially wrote.”

Those short stories are the previously released singles True Love and Already Dead. The pair describe True Love as "a dark-hued hymn of love and euphoria", that’s full of pulsing trance synths. On Already Dead, Mike’s vocal is full of bravado, something he attributes to characterisation rather than having a set voice. The track is a comment on numbness and an ode to long dead literary heroes, “When we’re playing it live, by singing it with the most expression and the most life possible, it becomes more of a celebration.

Album opener All The Animals is a primeval narrative told through the eyes of creatures who were here before homosapiens, and imagines man as Earth’s alien inhabitant. Nobody Like You insists there are no clichés when it comes to love and it’s dissolution, as Mike pontificates, “It happens by accident and it’s so fucking painful and you’ve got to look yourself in the eye and confront how shit you are as a person and somehow come through it”. Sceptical Pay The Tax imagines “an algorithm is the establishment” and references the leaked Paradise Papers and the injustice of a system that serves itself rather than the people it’s supposed to. Mike says of the track: “I’m pretty A-political in the sense that I’m interested in humanity, politics has become automatically associated with economics and business and humanity should come before that.”

The album title, Binary Childhood, is a multilayered dissertation on the internet, introversion, constant online self-expression, and the struggle between our co-existing private and public personas. Mike and Joel explain: “We believe we’re a part of a generation that's been raised as binary children, programmed by a series of ups and downs. Slowly but surely we became enveloped in data, our own personalities were translated into online forms before we really knew who we were.”