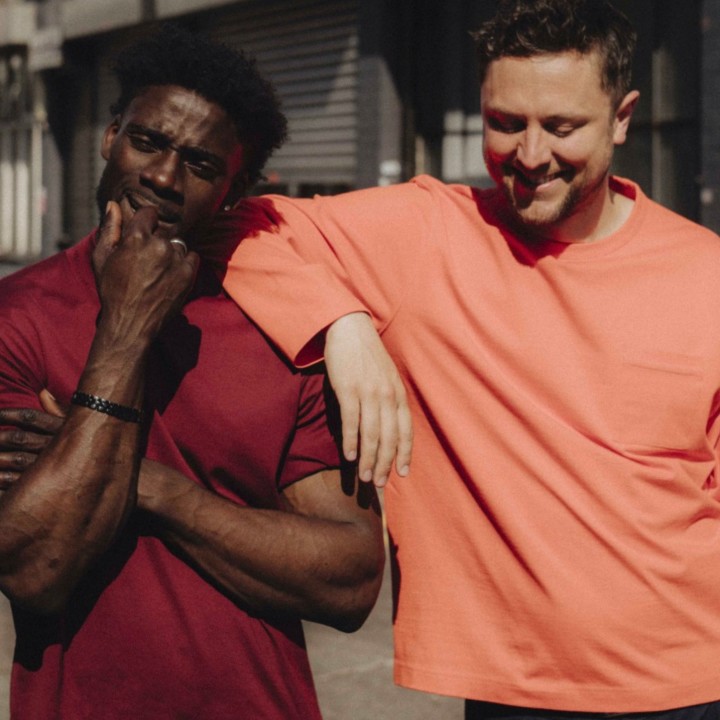 A collaboration that began accidentally. A glorious voice that was only gradually -- reluctantly, even -- revealed. A set of songs that developed lives of their own. An instinctive musical connection between a pair of producers that inspired a suite of tracks to form the magical world of OTHERLiiNE.

This is the musical partnership of George FitzGerald and TJ "Lil Silva" Carter. The former is a Domino-signed recording artist with two albums and multiple EPs and remixes behind him. The latter is a producer and artist who's worked with everyone from Banks to Off White/Louis Vuitton menswear artistic director Virgil Abloh, from Adele (on the blockbuster 25) to Mark Ronson and Diplo (on their Silk City super-duo).

Working together in FitzGerald's studio in Peckham and Lil Silva's studio in Bedford, the pair have crafted the seven-track wonder that is their self-titled debut release. OTHERLiiNE is as precise and specific as their name, which is all upper-case apart from two lower-case "i's" -- one "i" for each artist. That, both say, is as much "front" as they want for themselves. In OTHERLiiNE the music is wholly to the fore, the men who made it some way in the back.

"We've always just called it a project," says FitzGerald. "It's not 50 per cent me, 50 per cent Lil Silva -- it's this third thing. Together we're something else, something more. We've now spent so much time in the studio together, it's become another entity." For these supremely gifted and in-demand yet self-effacing talents, it's about defying ego, as well as arithmetic. The focus is all on the music.

And what music. The first release from OTHERLiiNE is 'Chimes,' an infectious house instrumental with literal chimes and waves of Balearic synth washes. As Lil Silva says, "it's a gentle introduction, easing ourselves in."

He's not wrong, because the track scheduled as the second release, the naggingly infectious 'Hates Me,' is a vocal wonder. Lil Silva's voice will stop you in your tracks, his sublimely soulful singing backgrounded by fluttery echoes of vocal snatches as a sense of agitation bubbles under the sweetness.

It's a remarkable performance from the producer, topped only by his vocals on the track scheduled as the third release. On the gently crescendoing, dancefloor-igniting 'One Line,' Lil Silva sounds like Peak George Michael. It's a proper hairs-on-the-back-of-the-neck moment, and one that was just as much of a surprise to his new partner.

"I'd listened to TJ's tracks for years," says FitzGerald. "And I just assumed he was like me: guy in a studio with synths who can't sing for shit!" he laughs.

"I used to sing in church when I was younger but didn't release any vocal track until 2013 on 'Mabel,' like 5 years after my first release." Lil SIlva continues. "Even then people didn't know it was me. I'd usually sing first to build the music, but nobody would ever hear any of these versions with them on. Then I did start to leave vocal moments in early tracks but If you picked up that it was me, great. If you didn't, also great."

The OTHERLiiNE pair first connected when Lil Silva contacted FitzGerald to remix his 2016 track 'Lines' -- a title that would later feed into the idea for their collaborative name, and a hook-up that quickly revealed an artistic connection and a creative kinship that went beyond mutual respect.

"We both came out of a DIY underground dance music, albeit in different areas," reflects FitzGerald. "TJ was kinda looped in with UK funky, and people called me post-dubstep. They were quite closely related and happening at the same time. We both built our careers from the ground up, just ourselves, DIY, independently. And we have the same instincts: keep it simple."

Then, working on his second album, 2018's All That Must Be, FitzGerald had precise ideas of what kind of vocals he wanted.

"I'm always looking for vocalists who are not necessarily the best technical singers, but they have a tone," says a producer who's also released half-a-dozen EPs in the last decade, some created during a five-year [CORRECT NUMBER OF YEARS?] stint in Berlin. "There's something about those voices that's really, really distinctive. So I reached out to Tracey Thorn because she has that kitchen-sink romance and melancholia feel which I've always loved. Similarly, TJ has a wonderful reedy quality. I didn't want this manufactured major label pop thing."

Lil Silva duly came in to co-write and sing on the All That Must Be track 'Roll Back,' a stand out on an album brimming with moments of post-rave, post-euphoria glory. And, they soon realised, there was more where that came from. So they began writing together for a new standalone, unspecified project.

The first, cornerstone track they came up with was 'Silence,' an energetic digi-soul anthem. But still, they weren't in a hurry. To paraphrase the title of one of Lil Silva's dozen or so previous releases, this would be a "journey inside my imagination." And, in its 360 completeness, with its careful consideration of the graphic look of the OTHERLiiNE project, it would echo another, earlier collaboration: in 2016, Virgil Abloh released Li Silva's tracks 'V1' and 'Cyrup' on vinyl, housed in a sleeve designed by the Off White legend and accompanied by a limited edition t-shirt.

"It became a much bigger thing," Lil Silva reflects. "It was fun doing clothing, and music, and art -- and my record was being sold in Selfridges, which was kinda unusual."

Starting writing and recording in earnest late last year, the pair pushed on, and pushed each other.

"We have a great balance," acknowledges Lil Silva. "There's a telepathy, a connection that we have. We'll get ideas to a point, and George is great at finessing, adding beautiful synths and little bass moments that just lift it."

"The flow in the studio goes up and it goes down. You spend hours there," adds FitzGerald. "But when it's going well, we're quite often thinking the same thing -- even if he's in his studio and I'm in mine. TJ has an approach to melody that I just wouldn't come up with. He'll be messing around with something and this incredible, interesting hook will just come up, then we can build from there."

Ministry of Sound jumped at the chance to release OTHERLiiNE, the label sold on the idea of a concise, focused, thoughtful, thought-out and thought-through project: seven tracks, no more, no less, in a precisely consider order. Musical interludes to maintain and finesse the flow from song to song. A simple title.

"And there will be a 2," promises Lil Silva.

But only when they're ready. OTHERLiiNE are in no rush. With the quality and quantity of their work, in their considered approach of their project -- from sound to songs to name to title to graphic rendering -- they're flying in the face of maximalist music culture that demands constant releases and sudden drops and multiple collabs. As FitzGerald states: "We haven't rushed anything with this project." And as he said before: keep it simple.

"Only put out things that you like," they conclude with what might be the OTHERLiiNE manifesto. "Don't overreach. Don't listen to anyone telling you need a massive topline if that's not what you want. And it'll be alright."

There is another way to make great music. There are other routes to magic. There is OTHERLiiNE.