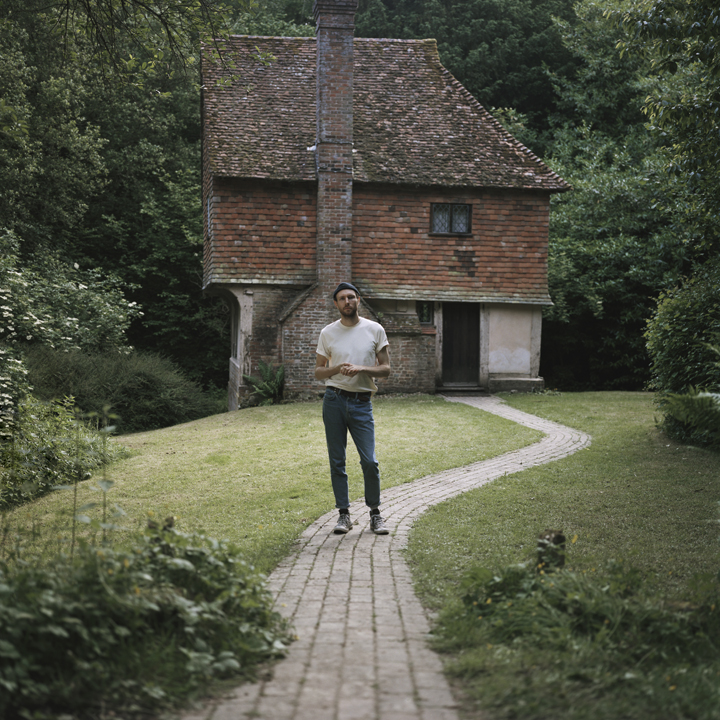 There is a stretch of road that runs through the Adirondack national park, just a few miles of houses and barns and truck stops and trees, that makes up Woodgate, New York. But just off from this road is a rough track that leads down to a lake, and a beach, and a cluster of old buildings. “And that’s where I spent my summer,” says Ali Lacey, better known as Novo Amor. “On a really deep lake with a dock surrounded by tall evergreens.”

That summer was five years ago now. But for Lacey, it remains a pivotal moment in his life and his music. Employed as a music teacher at a summer camp, he spent his days holding classes among the pews of an old chapel. “It was otherworldly,” he says, and the details are still keen in his mind: the bats that found their way into the chapel lanterns at night and in the daytime cast strange silhouettes against the walls; the scent of fresh pine; the unexpected greenness of that land. “It’s a really serene place,” he says. “It’s so far from anything that at nighttime you could lie on the grass and look up and see so many stars you didn’t know existed.”

It was that summer that a lot of things changed for Lacey. He put away his interest in rock and heavy metal and film scores and began listening to what he describes now as “Music with a lot more emotional depth than the music I was listening to before.” He fell in love with a girl, and suddenly he found that “as predictable as it sounds, a lot of songs started meaning a lot more to me, lyrically.” And he realised too that the relationship he began by the lake in Woodgate was in some ways as much about a place as it was about a person. “Going there, and then coming back from it is something that has played on my mind for five years,” he says. “How that place changed me. It did feel like a turning point in my life.”

When he returned from America, it was to a period of uncertainty. With no job and no plan, and his relationship now over, he moved back in with his family in Wales, back to his old bedroom, taking a job in an ice cream parlour and spending his free time writing songs. “I felt I was going through a massive state of change in my life,” he says. “I’d finished university and didn’t know what I wanted to do other than make music. So it was kind of a lack of direction that led me to writing songs. The name Novo Amor means ‘new love’, and it’s really cheesy in hindsight, but it reflects exactly why I started the project - because I was lost and I needed to find a new love, and I just put it all into making music.”

Lacey had been playing music since his teens, and had studied music technology at university with the intention of writing film soundtracks, but the idea of being a songwriter was new to him. “All the music I’d made before was orchestral scores,” he explains. “I’d never really written a song with lyrics just on the guitar before.”

His early efforts he dismisses as painfully emo, but in 2013 he volunteered to write the score for a friend’s feature film. “I did it as a favour,” he says, “just because I want to be involved.” For the climactic scene of the film he wrote a song he called ‘From Gold’, conjured unexpectedly late one night when he returned from his shift at the ice cream parlour. “What I liked about it was that the whole song was one crescendo,” he explains. “It’s a building piece, but it had delicate subtleties on the guitar and vocals which bring a bit more of an emotional element to it. Though it’s just four chords repeated over again for three and a half minutes, it’s the simplest thing, and simplicity is key sometimes.”

‘From Gold’ seemed to unlock something in Lacey, and he began writing a collection of songs he would release as the ‘Woodgate EP’ the following year — songs inspired by his time by the lake in upstate New York, that were tender and honest and lovestruck.

He quit the ice cream parlour and took a job making karaoke backing tracks. “It would be Kate Bush songs, and Conor Maynard, and weird Swedish pop,” he recalls. “You’d have to remake the song as close as possible but without the vocals. Seventy pounds a track. It was horrible.” He also produced somewhat unorthodox sound libraries for composers. “A project where I took apart random objects like baths and cookers and I recorded them at different velocities, hitting them with different mallets, and turned them into instruments on the keyboard that composers could play,” he explains. “It was just a good way of getting original sounds and different recording techniques. But that led into me doing sound logos - the things you hear at the ends of adverts. They were just ideas I’ve wanted to do, and they’ve ended up paying off.”

What this slightly peculiar musical trajectory allowed Lacey to do was to simultaneously continue writing and performing his own songs. “Music’s been a crutch for me to lean on these past five years,” he says. “It’s been my main thing and helped me to build my own studio and travel around playing different countries and meeting people.”

Among the people he met was the songwriter and producer Ed Tullett, with whom he forged an immediate bond. “It was nice to be around somebody who was so musically focused and who is so confident in his own ideas,” Lacey says. “It was great to just sit there and make music with him.”

Out of that friendship grew a musical collaboration, with a first single, ‘Faux’, released in 2014 (premiered on NPR and featured on the TV series’ ‘Bones’ and ‘Pretty Little Liars’), followed by second, ‘Alps’, two years later, and, this year, a full-length album, ‘Heiress’, released via All Points/Believe.

Working with Tullett did much to bolster Lacey’s confidence. “It gave me an insight into how other people write songs,” he says. “And it’s just nice to have ideas from other people sometimes, rather than me being stuck in my narrow-minded thinking of ‘I’m not really an artist, my songs have to be about a certain period of time… that’s all it is’.”

But that ‘certain period of time’ has lingered. Earlier this year Lacey released the ‘Bathing Beach EP’, a kind of sister EP to ‘Woodgate’. “Because four songs didn’t really encompass all that I was writing about,” he says. “It just felt like things weren’t over in that sense, and this feels more like a closing — a wistful nod to a certain period of time.” The songs, he says, “feel in the same vein as the first EP — the first song, ‘Carry You’, is similar to the first song from ‘Woodgate’, ‘From Gold’. But it feels like a more mature reflection on the same subject.”

The ‘Bathing Beach EP’, took its name from a postcard of the lake where he spent the summer of 2011. “It feels like a calming title,” he says, “and it captures the mood I had while I was there… But also where the land meets the shore feels like the perfect place to let something go.”

Lacey is still just 25, and life, he says, continues to change. “But things have changed in a good way,” he says. “A lot of people I grew up with wouldn’t expect me to be doing what I’m doing now.” What might they have expected? “I remember when I was growing up and I wasn’t from a wealthy family at all and one of my slightly richer friends told my girlfriend if that when we grew up he’d give her 10 grand a year if I couldn’t provide for her,” he says after a moment’s contemplation, and then laughs. “So I feel like having musical success is such a rare thing, and it’s not like I’m Ed Sheeran but it’s something I can do every day, which is amazing for me.”

He has his own studio in Cardiff now, a space big enough to keep his piano and drums and recording equipment in one place. “It was all bedroom music before,” he says. “Everything I’ve recorded was done when I was living in a house with four other people and a bunch of cats. And I have a lot of song ideas written down, but I’ve never really had a space to do anything with them. Now I can just spend time making stuff and experimenting and seeing what comes out of it. It feels like a new chapter.”