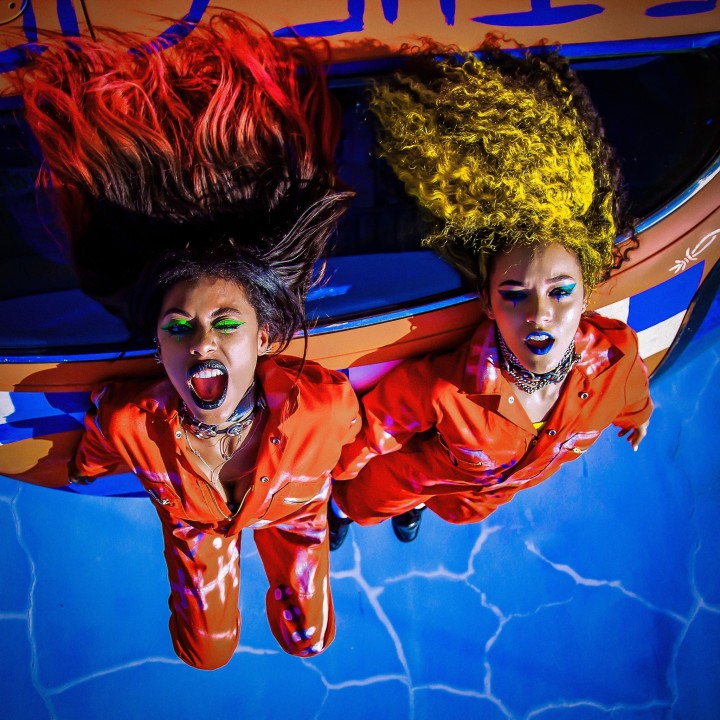 The weight and crushing defiance behind Georgia South’s bass alongside the sheer force in Amy Love’s vocals and guitar work, both channeling their bass and guitar through a mystifying combination of effects pedals, are what drives the Nova Twins sound. Refusing to conform to any template, the duo fuse bass-heavy, grimey punk, taking inspiration from artists as divergent in style as N.E.R.D., The Prodigy, Betty Davis, Missy Elliott and New York Dolls. As such, the best friends have turned rock on its head, injecting their songs with boundless energy, barely controlled rage and heavy riffs. Always dressed head-to-toe in designs they’ve made themselves, Nova Twins are capturing a unique moment in time with their genre-bending methods, capturing fans of all demographics with a riotous attitude and boundless resilience.

When you’ve never seen yourself in music, there’s an opportunity to build something from nothing. To make tracks that don’t sound directly like anyone else's. “We had to work out our own identities within music because we never had a reflection,” says Georgia South, Nova Twins bassist. “This is a 21st-century take on rock. It’s so many things.” Singer and guitarist Amy Love adds with a smile,  “It’s the NOVA sound.”

Over the summer, the band turned heads when they performed to packed tents during the busy festival season, stopping at Open Air Gampel, Boomtown, Download, Hellfest and Nova Rock to name a few. Following the success of support slots with Wolf Alice and Ho99o9, the duo were invited on tour with Prophets Of Rage, smashing it every night across Europe and the UK. Soon after, they were off supporting legends Skunk Anansie, before their own sold out headline UK tour.

2019 saw Nova Twins awarded The International Showcase Fund and the PRS Momentum Music Fund, which has helped artists such as Little Simz, Boston Manor and Years & Years, as well as scoring features in NME, The Guardian and Love Magazine to name a few. Champions of a truly DIY ethic and aesthetic, Amy and Georgia also caught the eye of Dr. Martens, who made them the face of their 2019 A/W Campaign - you may have already spotted them on posters and in-stores around the world!