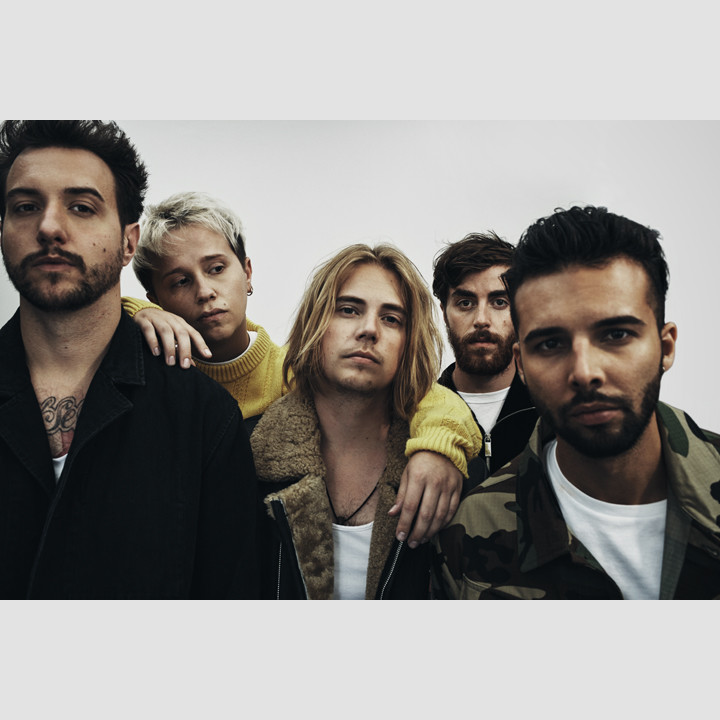 The Japanese art of kintsugi is to take something broken and make it more beautiful than before; shards of ceramic put back together with gold-flecked glue, the cracks a proud part of the object. It's a concept that's central to Broken Machine, the second album from Southend-formed, South-east-based five-piece Nothing But Thieves, whose slow-burning self-titled 2015 debut made them a big deal worldwide -- but fractured them too.

That debut album found fans in foreign territories first, from Korea to Japan, the States and Europe, and gained the young band respect from pillars of the modern rock community -- among them Muse, who took them out as support band on their 2016 arena tour. When the album campaign came to an end in December last year, it was marked with a celebratory homecoming headline gig at landmark venue O2 Academy Brixton -- a sure sign that the UK had caught up. "It was a real moment to reflect," says frontman Conor Mason. "We went to school together. We started playing in [guitarist Dom Craik's] garage together. Now we're playing Brixton together, somewhere we've been thousands of times over the years to see bands."

As well as being a celebration, the end of the tour was a relief too. Fearful of the dreaded 'second album slump,' Nothing But Thieves spent two years on the road working on the follow-up to their debut, and recorded swathes of it while touring America.

"I was really struggling with the whole lack of sleep and being away on the road for a year straight," says Conor. "I had so many conversations with the guys about it; I remember getting home from this long stretch, seven months, and thinking, 'I don't know if I can do this any more, I'm losing my mind.' Everything was just a struggle for us but these guys really helped me through it more than anything -- because I felt like if I didn't get their support I wouldn't have wanted to continue. It affected us in terms of what we wanted to put out for this next album. I like that in that hard time we've come out with a few songs about it, turning something really dark into something quite beautiful."

The experience -- turning personal unravelling into a shared experience -- informed the record they were making. Feeling the way they did, and reacting to the growing uncertainty in the world around them, Nothing But Thieves began to construct an album that revolved around a theme: systems of control. It's an album fuelled equally by late night discussions about the big stuff in life and by falling into YouTube wormholes watching clips of the radical orator Christopher Hitchins. In real terms, it means they've absorbed the big issues of the day and spat them out as fully formed anthems.

Among them are kinetic title track Broken Machine, the anthemic Sorry and the escapist fantasy Amsterdam, the storming song with which the band announced their return. "It's about being enclosed and frustrated," says Conor, "That lyric 'I left my heart in Amsterdam' was us thinking, 'That might be the end of it...'"

"We didn't set out to write a concept album, but it's as close to a concept album as we could go without making one," says Joe. "It's about systems we perceive to be automatic but when you actually look at them, they really aren't, whether that's mental health, religion, the political system -- just challenging those systems. When you're writing an album it's a snapshot of the times. If you're writing an album in 2016, 2017, you're going to write about Trump and Brexit and mental health. I think you'd be doing yourself and everyone else a disservice if politics wasn't referenced in some way."

Though written on the road, the album was chiselled into shape in the early months of 2017. Armed with 90 percent of a record in well-polished demos, they took off to an AirBnB in Hastings, set up a studio for a week, and even performed an acoustic gig for their dinner at a local pub. They then took the demos to producer Mike Crossey, famed for his work on Arctic Monkeys' second album, among many others, and described by Dom as "creative, inventive, fearless and calm," and worked on the finished record in LA.

Together they crafted the band's demos into 11 tracks that, like the debut, celebrate eclecticism and songcraft. "We weren't setting out to write something completely different, but I would say we experimented more, tried to push the boundaries, tried to capture something that pushed us outside of our comfort zone," says Dom. "If a song made us feel a bit odd, that's good." In fact, it's that spirit that motivates them. "The mantra of the band is to not regurgitate any ideas," says Conor.

Less of a consideration is whether their songs are arena-ready anthems, despite road testing their last collection while on tour with Muse. That, they say, will come naturally. "It shouldn't be a conscious thing to write those kinds of songs. Sorry and Particles could be deemed big arena songs, but they could equally have been tiny and indie -- we didn't set out to write them as massive tunes."

Actually, say the band, they hope simply to keep growing as they have in those incredible two years since their debut. Their main goal is more noble. "We're a guitar band with a really modern take on music," says Conor. "We're trying to be on the forefront. We play guitars, but we're not a rock band in the traditional way, because we're trying to modernise and push the boundaries of what you're supposed to sound like as a band."