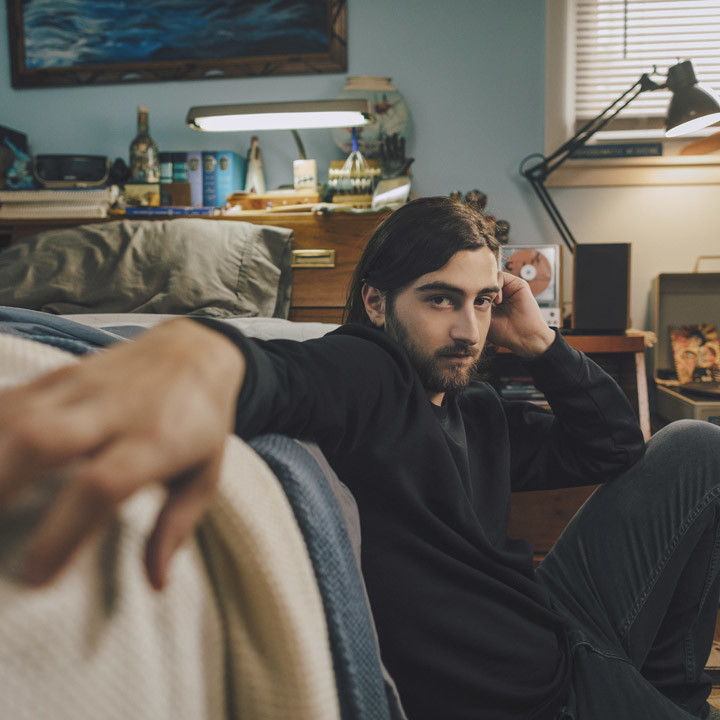 The smaller the town, the bigger the story…

Reception is nearly non-existent, but that doesn’t seem to bother the 1,000 residents that call this peaceful countryside hamlet home. The town’s sentiment of relishing in isolation is evident at the Kahan household, a 133 acre tree farm at the end of a steep dirt road, nestled in the rolling Vermont hills. The weather is harsh at times, idyllic at others, and a constant exercise in extremes. The seclusion provokes imagination but also imposes an earnestness that's rooted in Noah’s music and perspective.

Of his songwriting and his surroundings, Kahan explains “My music plays on an introspective space. I've learned about the realities of being in the real world but being in the countryside holds a lot of nostalgia for me. I try to capture that. I’m just telling stories while being heartfelt.

Small town wonderment led Noah to explore songwriting early on, emulating musical influences like Paul Simon, Ben Howard, and The Lumineers. He writes with thought-provoking realism about self-doubt and fear while highlighting the intricacies of relationships with an unpolished sincerity. That approach, along with head-turning vocals, has brought Noah a long way from Strafford in a very short time. As a senior in high school, Noah’s unique take on the world and his knack for crafting a captivating story attracted the attention of world-class songwriters Dan Wilson (Adele), Scott Harris (Shawn Mendes), Chris DeStefano (Carrie Underwood), among others. Word spreads quickly within the songwriting community and Noah soon became a welcomed collaborator of its inner circle.

In 2016, the 20-year-old attracted GRAMMY® Award-winning super producer Joel Little (Lorde, Khalid). The two recorded six songs together which have since been released periodically throughout 2017 via Republic Records. Debut single“Young Blood” entered Spotify’s US Viral Chart at #5, and quickly cracked over 9 million streams.

“Joel really pushed the music to a level that I never imagined it could go,” continues Noah. “He saw that the songs needed to be special. He really helped me achieve a unique sound. We wrote so much together, and we found an amazing groove.”

They honed that groove to perfection on the break out single “Hurt Somebody.” Propelled by lithe acoustic guitars, an unpredictable rhythm, and an impressive vocal range, the song was immediately showcased on Spotify in its coveted New Music Friday Playlist. Gaining steam, “Hurt Somebody” amassed over 1.4 million streams in less than a week, appeared on the global viral charts, and earned acclaim from Billboard who wrote, “It allows the songwriter to showcase his ability to blend mature themes with a folk-pop twist.”

“Being worried about how hard it is to end something can paralyze you,” Noah explains. “It’s a universal feeling. Pulling off the band-aid in a relationship or any situation is never easy. It means a lot to conjure the strength to call it quits. You can apply it to many different things—whether it’s romance or a work opportunity. ‘Hurt Somebody’ illuminates how the worry almost paralyzes you. It’s a personal experience where I was worried about hurting someone else, and I couldn’t end a situation because of it.”