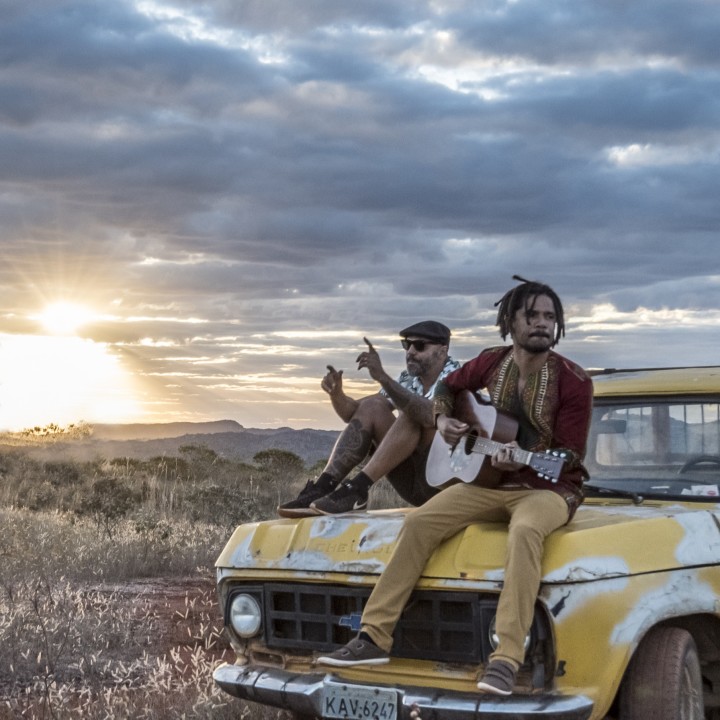 The band was born in Brasilia under the name Nativus. Alexandre Carlo, who was a student at the time, created it in 1996. The band first appeared in the university circuit of the Federal Capital and distinguished itself from the local scene, until the opportunity to record the first CD came about in Rio de Janeiro. From that point on, the history of the band went through pathways that the very members could never have dreamed of.

Currently with nine CDs and three DVDs released, Natiruts has a successful history that can be told from their discography. That is what will follow, a journey through the band’s albums, highlighting the songs that were among Brazil’s radio hits and still live in the heads and hearts of everyone.

Nativus, the record with the band’s old name, was independently released in 1997. Three tracks opened the doors to the phonographic market and earned the group recognition across the country: “Liberdade Pra Dentro da Cabeça” (Freedom inside the mind), “Deixa o Menino Jogar” (Let the boy play), and “Presente de um Beija-Flor” (Gift from a hummingbird). EMI Records was interested in the album and released the reggae band from the Cerrado (Brazilian mainland) nationwide. The outcome: it went platinum and along came the first tours from north to south.

In 1999 (now called Natiruts) the band released the album Povo Brasileiro (Brazilian People), which confirmed that the band would not be a fleeting success. The production was performed by Liminha, and once more Natiruts managed to place hits among the most played songs on Brazilian radio stations. Hits like “Eu e Ela” (Me and Her), “O Carcará e a Rosa” (Southern carcara and the rose), “Meu Reggae é Roots” (My reggae is roots) became a huge success, and the album went gold.

In 2001, legendary Tom Capone produced the Verbalize album. The title track, as well as the hit “Andei Só” (I walked alone), remained among the top hits on Brazilian radio for a long time. That album also led to their first shows abroad.

Another album produced by Tom Capone and that sold as well as the previous one, Quatro (Four), released in 2002, was the milestone for Natiruts fans. The aesthetics and the harmony of reggae roots added to elements of the Brazilian pop music have marked the musical identity of the band. “Bob Falou” (Bob has spoken), “Naticongo”, and “Leve com Você” (Take it with you) were the greatest hits.

In 2005, the band terminated the contract with EMI and became independent again. The Jamaican underground culture was cherished in the album Nossa Missão (Our mission), and introduced the dub sound. Production was carried out by Alexandre Carlo himself, singer and main composer of Natiruts. And even without a great record label backing it up, the track “Quero Ser Feliz Também” (I want to be happy too) became the greatest hit in Brazilian radios, and the video clip for “Não Chore Meu Amor” (Don’t cry my love), featuring Lirinha, was a huge success in views.

In order to celebrate the 10 years of Natiruts, in 2006 the band released their first CD and DVD Live, recorded at the Credicard Hall, in São Paulo, Brazil. “Natiruts Reggae Power”, the only track that was unheard of from the repertoire, became a national sensation, and the hit was awarded the “Gold DVD”. The tour for Reggae Power was record-braking for audiences both in Brazil and abroad. The album Raçaman (Raceman) was released in 2009, produced once again by Alexandre Carlo and mixed in London by the legendary Mad Professor, one of the greatest representatives of Jamaican dub. Sonority reached the fans’ ears in a much more modern fashion.

In 2012 the band came back with another live project: the CD and DVD Acoustic in Rio de Janeiro. That album celebrated 15 years of the band’s career with a breathtaking registry scenario – Mirante Dona Marta (Dona Marta Observatory) – and was nominated for the Latin Grammy 2013 in the category Best Brazilian Modern Pop Album, and was awarded the platinum DVD.

In 2014, the band was steady on the road, going through Brazil, Argentina, Chile, and Portugal with the Acoustic songs. In the same year the DVD/CD #NoFilter was released, with live recording that brought the spontaneity of an unprogrammed registry.

In 2015, a nice surprise: the famous list from Billboard notified that Natiruts is ahead of Tom Jobim in the list of artists that are more heard abroad. While the foreigners go wild partying with Natiruts, the band prepares to release the DVD and CD Natiruts Reggae Brasil, and to launch a new chapter in Brazilian reggae.

In 2017, the seventh studio album, Índigo Cristal, was released on the 4th of August, the same period that the band began a huge tour around Latin America. The most recent tour was sold-out and went through Chile, Uruguay, Argentina, Mexico and Paraguay. Now, it goes around Brazil.

In 2018, the eighth album, I Love, was released and produced by lead singer Alexandre Carlo in the studio Zeroneutro, in Brasília. Its songs are a trip through rhythms from several corners in the world in interpretations following the best Natiruts style.