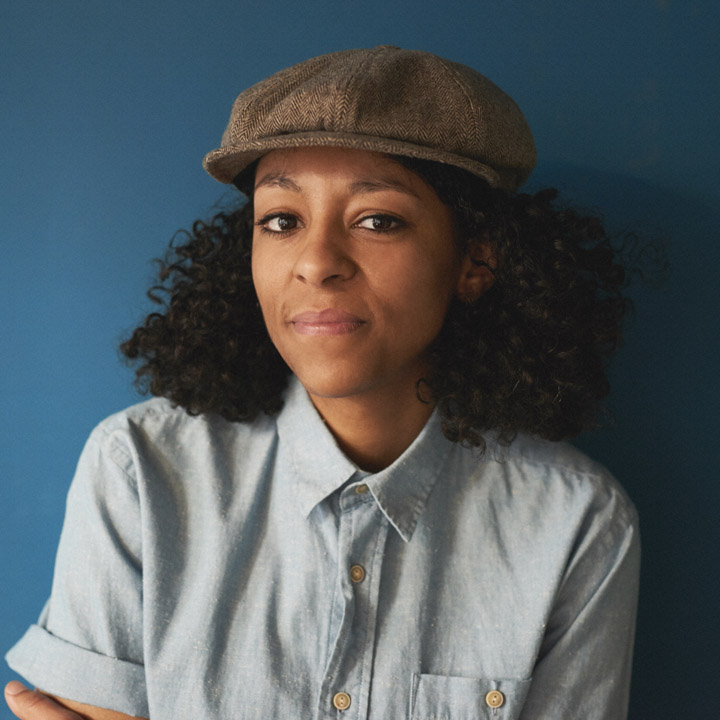 Nana Adjoa is the Dutch-Ghanaian singer-songwriter brimming with quiet confidence. Her new EP, Down at The Root (Part 2) combines the warm, musical simplicity of great song-craft, with the bold, multi-layered palette of artists such as Beck or Little Dragon.

Born in Amsterdam, Nana spent a portion of her childhood in the concrete environs of working class neighbourhood the Bijlmer. “It’s not the nicest part,” she says with trademark modesty of an area described by the local chief of police as a ‘national disaster area’. Her father was a Ghanaian who’d came to Amsterdam in the 1980s, her mother Dutch (“very Dutch”). She’d played the bass in a Ghanian Highlife band, a facet of her personality that Nana knew nothing about until she was 10 or 11 years old. “When I started my first band, I asked my mum if I could learn the bass and she told me she had one!” the 27 year old, mulit-instrumentalist laughs. “It was meant to be.”

At the time, she and her band mates weren’t thinking particularly about what they wanted to do. Nana grew up with a lot of black music, a lot of soul, in her home, but performed the kind of rock covers that were de rigueur for any high school outfit. “My parents listened to a lot of 90s R&B, and older stuff such as Parliament or Funkadelic,” she describes. “We just wanted to make some noise.”

Nana was a sporty kid, into playing soccer and being outside. She’d skate with her band mates - “breaking bones” as she puts it - until it started to hurt too much and she quit. Later in her teens, she fell in with a group of musicians who had ambition beyond the confines of the basement in which they’d practice. “These were people who were the same age as me but really good musicians already. It was then that I decided I wanted to attend conservatoire.”

Nana was accepted to study jazz (electric bass and double bass) at the prestigious Amsterdam Conservatory, however the reality wasn’t quite what she’d imagined. “It was very much like school,” she says, today. “We thought we wanted to go to the most difficult department, that we wanted to be the best, but it wasn’t a very fun experience.” A divide began to grow between the restrictive, theoretical compositions she was studying and the more melodic, free-flowing music she was playing outside. “I didn’t think about it too much, but I was just writing more and more.”

Of course, with composing your own music, comes a need to step forward from the side-lines. Nana describes herself as the kind of bass player who liked to be at the back, laying the foundations for the other musicians in a quiet but commanding way. “It’s a safe place to be in, but eventually you just have to let go.” In 2014, she entered herself into Grote Prijs van Nederland, the largest and longest-running pop music competition in the Netherlands. There was only one small problem: she didn’t have a band.

“Of course I had a lot of musician friends so I just asked around a bit,” she laughs. “It was a really nice experience. I’d written a lot of songs and I thought, what am I going to do with them sitting here in my computer?” Nana not only went on to advance to the final round, but found herself a manager in the form of one of the judges. It was the night that would mark the beginning of her transition into an artist in her own right.

“I wanted to first find my own band, start slow. It still is a gradual movement, but I became willing to put myself in that awkward position by taking it one step at a time.”

The first step we heard of that new position was string-laden debut The Resolution last June. The lead into an EP, Down at The Root (Part 1), released in November, it announced Nana as an artist capable of crafting both powerfully melodic and quietly anthemic songs, without losing any of the vulnerability that made her such an attractive prospect in the first place.

Follow-up single Late Bloomer, secured her place on Dutch national radio, while support from Spotify followed with inclusion on playlists ‘Indie Pop’, ‘New Indie Mix’ and ‘The (Dutch) Spotify Viral 50 Charts’. “It’s a really nice feeling when people actually listen to the music you created somewhere,” she says of an ever-growing fan base. “It’s still crazy.”

Next up, Nana is preparing to release the second half of her Down at The Root EP. She’s just moved into a new studio, with new equipment and new opportunities, and you can hear her growing confidence on lead single, Honestly, a self-described “outsider track” that grew from its simple piano backing into an altogether more vibey affair. “I didn’t even think it was going to make the record because it felt so different from the rest,” Nana says.