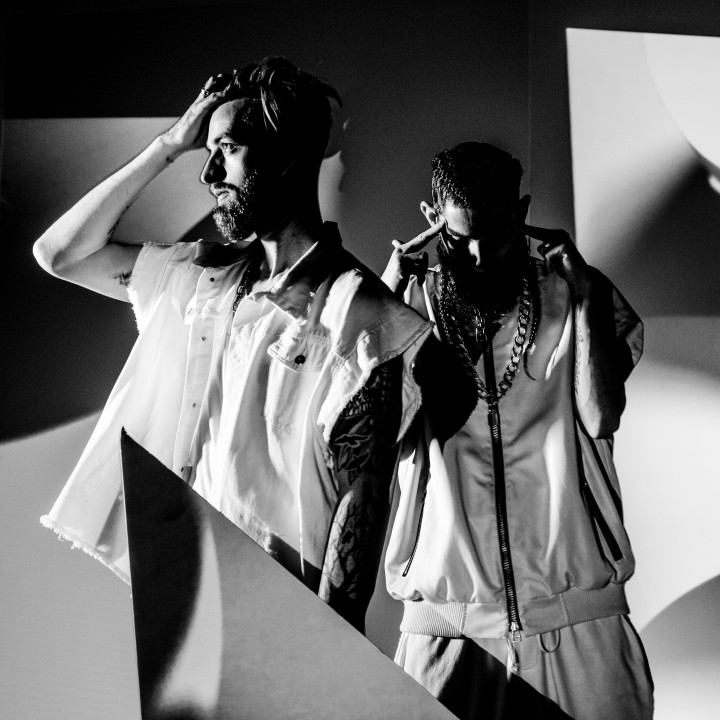 The unique alchemy that is MISSIO comes from Matthew Brue and David Butler, two extremely talented individuals whose rare musical symbiosis creates music that bridges all the disparate parts of the melting pot that is 'alternative' music today. Only a band like MISSIO could take inspiration from of all forms of pop, rock, electronic dance music, and hip-hop, later mixing it into something that is entirely their own.

Typically described as innovative artists, the duo is consistently underrated by the 'Music Industry' at large and it's important to get the facts out of the way upfront.

FACT: MISSIO has accumulated close to one BILLION streams within three years and two album releases. Yes, that's billion with a 'B.' It's unfortunate that many of the traditional gatekeepers of the music industry still haven't figured out what the global streaming audience already has... MISSIO is fucking awesome.

FACT: MISSIO broke out on a global scale in 2017 with their single 'Middle Fingers' which reached top 10 at U.S. Alternative Radio, later leading to an appearance on the Conan O'Brien late night show amid the launch of their debut album 'Loner.' That same album has also spawned hit songs like 'Bottom of the Deep Blue Sea,' 'Everybody Gets High,' and 'Twisted' that have all reached over 50 million streams each (and counting) on streaming platforms.

FACT: MISSIO released their second album 'The Darker the Weather // The Better the Man' in mid 2019, broadening their sonic palette with songs like 'Rad Drugz,' 'Underground,' and 'I See You' which was the #1 song on the Sirius XM Alt 18 for 9 total weeks. During this album, their streaming audience tripled and they capped off their album cycle by releasing the hit single 'Sing to Me' as part of the soundtrack to the global video game phenomenon 'Death Stranding' alongside artists such as Chvrches, Major Lazer, Khalid, & Bring Me the Horizon.

FACT: MISSIO have toured the United States extensively through several large support shows and headline tours with the likes of MUSE, 30 Seconds to Mars, Yungblud, and K. Flay. The duo has made appearances at major festivals such as Lollapalooza, Austin City Limits, Firefly, Hangout, Bottle Rock, and Voodoo Fest. Expanding their touring base to Europe, they've now performed at festivals and sold out headline shows in the United Kingdom, Netherlands, France, Germany, Czech Republic, Poland, Hungary, Ukraine and Russia. Their high energy live performances and custom-built light shows have easily set them apart from their peers and earned them near universal acclaim from their fans.

Given these facts, it is undisputable that MISSIO are still unknown or undiscovered by far too many people given everything they've achieved so far.

Beginning the next stage in their music evolution Matthew and David landed back in their own city of Austin, Texas this past November with their producer, co-writer, and creative partner Dwight Baker and over a feverish 21 day period wrote and recorded the entirety of their upcoming 3rd album, 'Can You Feel The Sun' (later releasing via 2B Recordings / BMG).

"We started talking with Dwight last summer about recording new music even though our second album had just released," says Matthew Brue. "I felt inspired after coming back from our first European shows in some of the most beautiful cities in the world and seeing our music translate across the ocean was incredibly surreal. I instantly began writing new demo's, taking hold of the many feelings that come along with living out your own dreams."

David Butler adds "We wanted to create music on our own terms, separate and apart from any label deadlines or industry pressure. We were the only ones we wanted to impress."

The band started with a range of demos that eventually snowballed into being a complete and finished full length album.

"We worked until we felt like we were done and then one day woke up and knew we had a finished album" says David. "Even from the very beginning of the process I already knew that 'Can You Feel the Sun' was one of the best songs we'd ever written and knew that we had something special."

After finishing their album MISSIO excitedly kicked off 2020 with a sold-out European tour. However, in the middle of their tour in March of this year they were pulled off of their tour bus at 2 A.M. while crossing the Czech border so that men in hazmat suits could check their temperatures and make sure that the touring party didn't have the COVID-19 virus which was beginning to race across Europe. The second half of their tour was immediately canceled, and the band raced to get home on the last day before the U.S. border was closed.

Matthew says, "The media was going crazy and no one knew what was really happening. We were getting conflicting reports every hour and we started to realize that everyone in our band and road crew might be stuck in Europe and away from their families if we didn't get back home soon. At that point, no amount of money was worth the risk."

"It's hugely disappointing to not have been able to play the rest of those shows, especially our planned Moscow show for thousands of people. That would have been our largest headline show to date," adds David. "In that moment you're not thinking though, you're just trying to get through it. Sometimes you just have to trust the path."

Deciding to forge ahead with releasing an album they knew their fans needed, the band released the first single 'Wolves' on June 24th, 2020 and it received immediate acclaim reaching #1 on the Sirius XM Alt Nation 'Top 18' in three weeks. This would be their 4th #1 single on the countdown to date.

MISSIO has always been a band that is known for their thoughtful lyrics, raw emotion, pure, and unadulterated fun. Tracks like 'Wolves,' 'Hoodie Up,' 'Cry Baby' (feat. Paul Wall), 'Vagabond' (feat. Esoteric of Czarface), and 'Roman Empire' might get the fans incredibly hyped up but, songs like 'Don't Forget to Open Your Eyes,' 'We All Burn to the Ground,' and the title track 'Can You Feel the Sun' glimmer with an introspective insight that now takes on an even deeper meaning in a pandemic ravaged world.

"With a song like 'Don't Forget to Open Your Eyes' I honestly don't know where those lyrics came from," says Matthew. "I had never taken the time daily to view the sunrise or the sunset and somehow this song has helped me personally heal when I'm overloaded with anxiety or depression. It continues to prove its message is bigger than ourselves."

David adds "The reason we create, and release music is because we love the process of making it all. Being able to write songs for ourselves has to be its own reward even though we're hoping we can get out on the road and play music for people again soon. Until then, we're hoping through our new music to encourage people to ask questions and to open their minds."

Given the quality of their new album and the legions of fans they've earned along the way (known as the 'MISSIO MAFIA,') it seems like just a matter of time before MISSIO achieves the mainstream breakthrough they so thoroughly deserve. Until then, they're focused on continuing to make their fans happy with amazing music and undeniable live shows...all the while knowing that the next billion streams are right around the corner.