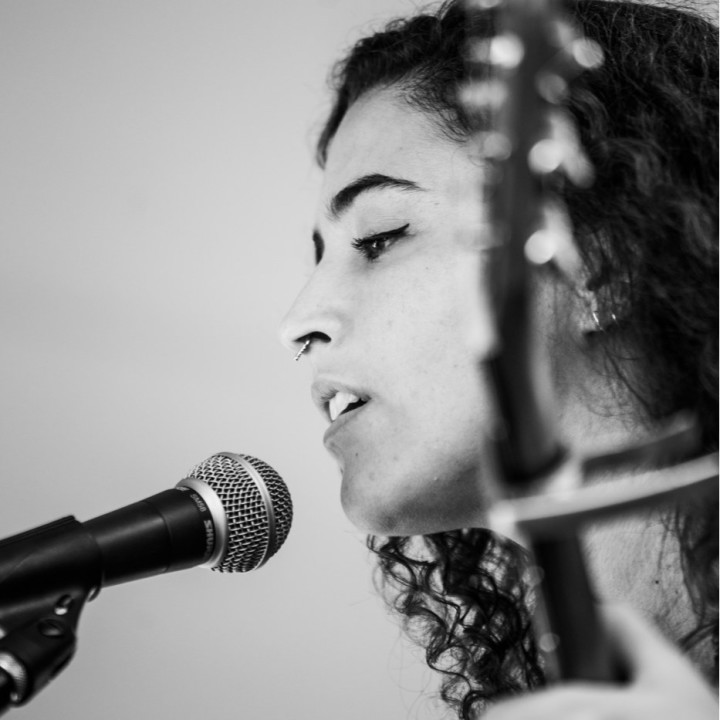 "Literally you're my favorite singer in the world THANK YOU MARO" - Lennon Stella, Instagram, January 31, 2020

It wasn't until she was 19 that MARO realized she wanted to pursue music full time. She graduated from Berklee in 2017, and made the decision to move to Los Angeles instead of going home to Portugal. In her first year in LA, MARO released six self-written and self-produced albums. During this time, video clips she posted on Instagram put her on the radar of 4X Grammy-winner, Jacob Collier. Jacob invited MARO to join his debut touring band as a featured vocalist and instrumentalist. She was also asked to open for Jessie J, Fatai, ¿Téo?, and others. With influences from Elis Regina to Esperanza Spalding to Rajery to Justin Bieber, MARO is excited for what's to come.

Having gained attention from the likes of Quincy Jones, Justin Timberlake, Jessie J, Tracy Chapman, Lennon Stella, The Paper Kites, and many other notable names worldwide, Portuguese multi-instrumentalist, vocalist, producer, arranger, and composer, MARO, is undoubtedly one to watch. With only a single listen, it is easy to see why MARO's inimitable voice and songwriting prowess set her apart from any sound on the market. With over three million streams on Spotify, MARO has built an undeniable following completely on her own, in under four years. In 2018 alone, MARO released six self-written and produced artist projects, yet they only scratch the surface of the melodic canvas she has yet to paint.

Although she did not begin pursuing music professionally until the age of 20, now 24, she was immersed in classical conservatory training at age four; wrote her first song at age 11; and at age 12, picked up the guitar as an autodidact, a key instrument in her composition process, along with the piano. After years of struggling to fit in with the rigidity of her formal academic education in Portugal, the realization that music was her calling came while listening to "Cais" by Milton Nascimento during a one year hiatus in 2014, before entering veterinarian school. Without hesitation, she immediately applied to Berklee College of Music on a whim, before telling any of her family members or friends. After a surprise acceptance and being named a recipient of four top scholarships, including the European Tour Scholarship, she soon found herself on a plane to Boston with nothing but her guitar and a suitcase full of clothes. With the expectation of only being able to stay for one semester, due to limited finances, she later planned and executed a sold out fundraising concert that she headlined at Auditorio Sra Boa Nova, with guest artists including Rui Veloso and Pedro Moreira. After managing to return to Boston, she continued with her newly minted progressive folk band, BAERD, in which she later released two projects with, and currently remains a member of. In pursuit of creating a supportive, non-competitive environment for her fellow Berklee students, MARO started an informal YouTube series in 2016 called ​Berklee People that consists of unrehearsed live recordings of MARO's arrangements of cover songs, which gained significant online attention.

After graduating in 2017, she took yet another leap of faith and permanently moved to Los Angeles on her own, with barely any financial support, to actively pursue music. In the first half of 2018 she released her debut solo album in three separate volumes: ​MARO, Vol.1, 2, & 3.​ All songs, written between the ages of 12 and 22, are organized chronologically in the order in which they were composed, and are sung in both Portuguese and English. Following ​MARO, Vol.1, 2, & 3​, she released three additional projects: one solo and two artist collaborations. ​Mistake to Be Learned​, released in Q3 of 2018, is a four song EP collaboration with American producer, BLANDA [Khalid, Free Spirit​] which showcases her versatility as a pop-soul and RnB artist. Also in 2018, MARO released her fifth project of the year, MARO & Manel,​ a captivating collaboration with Manuel Rocha, a young guitarist and songwriter, which brought forth a Portuguese-influenced amalgamation of sounds. ​it's OK​, MARO's sixth and final release of 2018, is a nine track solo album that takes you on an emotional, auditory journey, with an acoustic emphasis. During this time, video clips she posted on Instagram put her on the radar of two-time Grammy winning artist, Jacob Collier, managed by Quincy Jones. After a few correspondences, MARO was invited to join Collier's debut touring band as a featured vocalist and instrumentalist, which she currently remains a member of. She was also asked to open for Fatai on tour in 2018, as well as ¿Téo? on his first headlining ​Americano Columbiano​ tour in 2019.

Having already performed at some of the most important venues in Portugal, Centro Cultural de Belém, Teatro Capitólio and Casa da Música; Vodafone Mexefest; various venues around Boston, New York, Los Angeles, San Francisco, and the rest of the world; as well as on live Rádio Comercial as an invited guest of Portuguese singer, Carolina Deslandes, MARO continues to make a name for herself on a global scale. Furthermore, she is set to record with famed Spanish musician, Pablo Alboran, and is currently in the studio writing with and for Billboard chart-topping artists. Newly signed to the legendary Quincy Jones's management roster, MARO has proven to be not only a true musician, but one who also understands that good music cannot be confined to a specific genre. With influences from Elis Regina to Esperanza Spalding to Rajery to Justin Bieber, MARO's ability to sing and write for reggaeton, pop, RnB, EDM, folk, to just about any other style of music is what will not only put her at the forefront of the industry, but will keep her there for years to come.