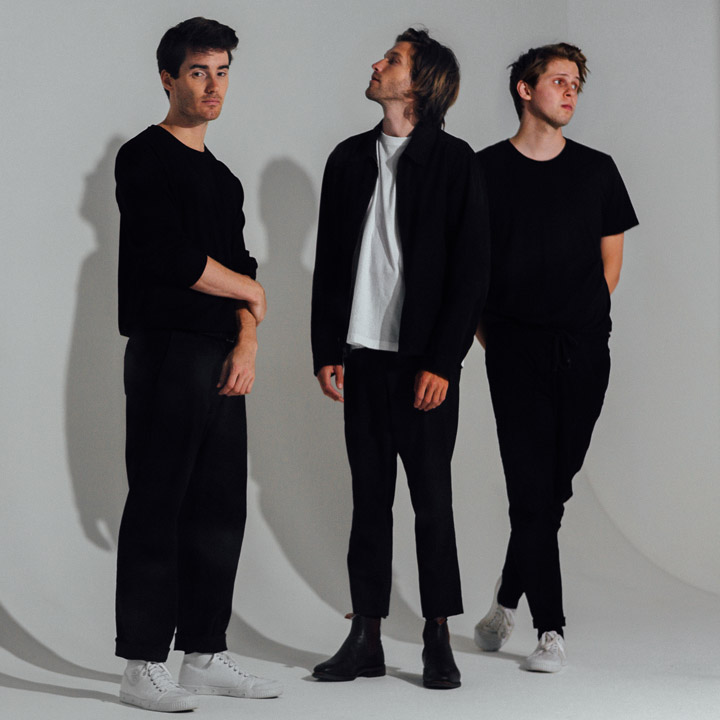 Shadowboxer, the long-awaited debut album from Sydney's Mansionair, diarises the band's journey so far in one sprawling sitting.

While putting out seven singles since their formation in 2014, the Grammy-nominated trio -- Jack Froggatt, Lachlan Bostock and Alex Nicholls -- always had designs on something bigger. They just weren't sure what story they wanted to tell, until a breakthrough moment when they realised their own story was the one worth telling.

"The album is about making the album. That's pretty meta, but that's why it's called Shadowboxer," producer/guitarist Lachlan explains. "Shadowboxing is all about that preparation -- you're not really fighting anything, but you're practicing to fight. This is our first big step out as a band and we're finally putting all this preparation into practice."

Written and self-produced over a three-year period -- in living rooms, studios, a garage in inner-city Sydney, and finally a cabin in the California mountains -- Shadowboxer is an album about making mistakes in private together, and then coming out the other side with something beautiful and whole.

It's an album reflective of everything the band were going through personally and creatively -- from mental health to sickness, relationship breakdowns to the ordinary coming-of-age struggles of youth. But for Mansionair -- who've grown up in the limelight since the first thing they did as a band, Hold Me Down, garnered acclaim from NME, Stereogum and BBC Radio 1 -- those struggles were even more pronounced.

"Shadowboxer is about acknowledging that we are often our own opponent, and learning to accept our inner shadows -- the ones we try so hard to ignore," says Jack, the band's singer and main lyricist. "It bookends our first years of discovering who we are and what we wanted Mansionair to be, as we pushed through insecurities, uncertainties and moments of relief."

Listening to Shadowboxer it's clear that whatever Mansionair were going through behind-the-scenes isn't reflective of the confident, fully-realised work they've created here. You can hear it in the first few seconds of Alibi, a statement of intent that opens the record with some uncharacteristic blasts of bone-shattering bass.

"We wanted something so obnoxious you couldn't be indifferent about it," jokes Lachlan. "We we were like, 'How loud can we make it so it almost feels like your speakers are breaking?'"

Shadowboxer charts Mansionair's evolution over the past four years -- from 2016 single Easier, which was written in Lachlan's living room in the midst of a songwriting slump; to Heartbeat, a soaring Sigur Rós-like moment that took shape during a stint in the mountains of California.

Harlem, another song from that productive session, is a masterclass in shifting moods and dynamic intensity. Anchored off a guitar line so buoyant it might float off into the air, the track features a typically evocative lyric from Jack, who says he was trying to conjure the feeling of driving through the night in the backseat of a car

"I get inspired by a lot of visual cues, but some of them come after," Jack explains. "I remember listening to Best Behaviour from the album and just picturing this moon rising. That's what the song is trying to say. The moon is such a lonely figure, but he just rises and pulls the tide in and just does his thing. Maybe that's what we should all do?"

Mansionair spent six weeks in a cabin, immersing themselves in the songwriting process and reconnecting with each other following a stressful period trying to finish the record. Alex, the band's drummer, describes the experience as rejuvenating, especially after a huge run of shows with Bob Moses; tours with the likes of CHVRCHES, Florence + The Machine and Alt-J; not to mention a Grammy nomination for their collaboration with Odesza, Line Of Sight.

"It was something we all really needed because we were so exhausted," says Jack of the Grammy nod. "It was a beautiful moment."

The Mansionair origin story differs depends on who's telling it, but Jack's version is worth documenting, not just because it sounds like a rom-com meet cute, but it explains the source of their musical DNA.

"I knew Lachlan through friends and we met up by the Byron Bay donut stand at Splendour in 2013. He had just came from Flume and I had come from The National. He was like, 'We should make music together. And I thought, 'This guy's just come from Flume. This is not going to work.' But I said, 'Ok. I know you like some good records and let's see what happens."

Three weeks later, Lachlan sent Jack the instrumental stems of a track he'd been working on with Alex, a drummer with a jazz background who moved in similar musical circles to him. The track would later become Hold Me Down, which racked up millions of listens before Alex and Jack had even met.

"We thought it'd get like 200 spins on Soundcloud, but then when it started going well I thought, 'I should probably meet this person,'" jokes Alex. "I got to know Jack a bit better and we decided that being in a band made more sense than Lach and I doing just a production duo thing. There were was just an energy and excitement there that made us want to be a band."

Since then Mansionair have been learning how to be a band in reverse; a process that has come to fruition on Shadowboxer, where all these internal battles coalesce into something great.

"We've had to spend like two to three years working out how to work with each other," Lachlan says. "We're starkly different people with massively different music tastes. That's a challenge in itself but it's a challenge we wanted to take because we come up with stuff that individually we would never have thought of. We've slowly worked it out together."

Jack agrees, adding that the band's differences are what defines them.

"We have a drummer that works best independently, a singer that labours over things for days, and then Lachlan, who pieces it all together. Even our managers were like, 'How do you do this?' But we found a way -- and that's what Shadowboxer is about."