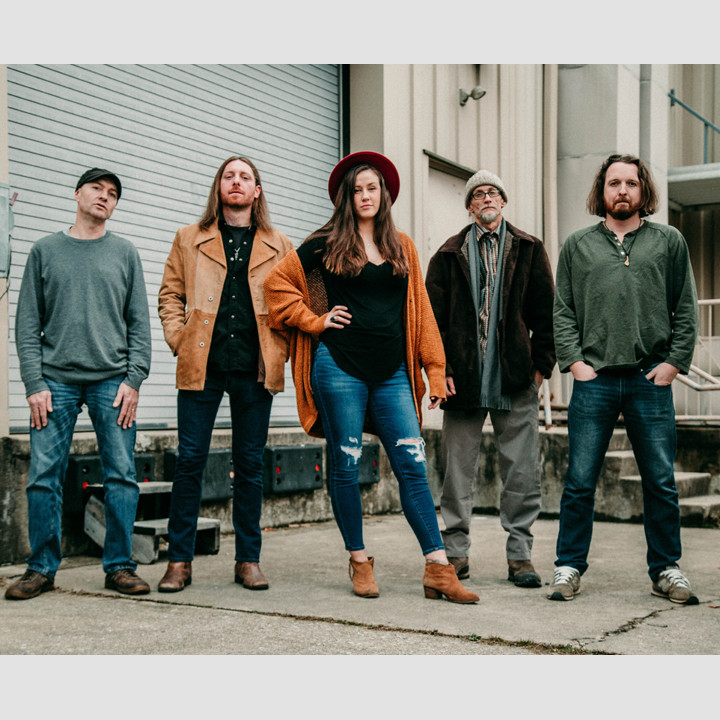 "What a righteous time to be alive / right here with one another," sings Magnolia Boulevard's Maggie Noelle roughly a minute into the joyous and jaunty "Ride." The words are ostensibly about a budding relationship between two individuals, but Noelle could just as easily be referencing the singular and special connection that exists between her and her Magnolia Boulevard band mates -- guitarist Gregg Erwin, drummer Todd Copeland, keyboardist Ryan Allen and bassist John Roberts -- or, as likely, their bond with the fans that for the last year have been packing clubs in and around the band's hometown of Lexington, Kentucky to sing, shout, shimmy and sweat along to the music.

"When we're onstage we play with a lot of emotion," Noelle says. "And then we feed off the crowd's emotional reaction to us and we give it right back to them."

Adds Allen, "We're all in the room together, sharing one experience."

Central to that experience is a sound that flows easily and seamlessly from a multitude of stylistic tributaries. There's plenty of blues, soul and rock 'n' roll in the Magnolia Boulevard mix, but also elements of funk, jam band, folk, jazz, country, bluegrass, psychedelia and other music. And it's all fueled by the rhythm section's elastic, tight-but-loose grooves, shot through with Erwin's expressive and incisive slide guitar licks and topped by Noelle's soul-stirring, powerhouse vocals.

"As a band we're coming from the mind set of groups like Joe Cocker and Leon Russell with Mad Dogs and Englishmen, the Allman Brothers," Erwin says of Magnolia Boulevard's musically omnivorous approach. And indeed, talk at length to the members and they'll fire off a wide range of individual influences, from Bonnie Raitt, Aretha Franklin and Neil Young, to the Grateful Dead, Elton John and Miles Davis, to Sly and the Family Stone, John Prine and John Coltrane. But the key to what they do together lies in the unique way they absorb and put their own spin on these sounds. "We don't ever nail ourselves down to one thing," Roberts says. "We're always conscious of letting the music be the music and just allowing it to happen."

By all accounts, the music was happening from the very first time the members picked up instruments together, at an old industrial space in downtown Lexington in early 2017. There, the nascent band ran through a few cover tunes -- some Tedeschi Trucks, Bonnie Raitt's version of John Prine's "Angel from Montgomery" -- and, Copeland recalls, "it was basically chills up your back, like, 'This is special.'"

From there, Magnolia Boulevard began making a name for themselves through incendiary, improv-heavy gigs at local Lexington-area spots like Cosmic Charlie's and the Burl -- "home base," as Allen refers to the latter venue. Their ease as a live unit is hardly surprising -- individually, the members have logged hundreds of hours onstage in various outfits. What's more, the stage is literally where several of them first met. Recalls Erwin, "The first time I ever talked to Todd was when we were both playing a fill-in gig for a mutual friend. We finished setting up our gear before everyone else arrived and he looked at me and said, 'Play something.' I had this thing in my mind and, out of nowhere, played it. And that actually ended up becoming our song 'Ride.'"

Allen tells a similar story, having crossed paths with Erwin when both were drafted to play "a little pickup gig for no money" at a local bar. "During the show Gregg said, 'Hey man, I'm starting a band -- do you want to come and play some keys?'" he recalls. "Somehow we just found each another."

What they also found is a musical connection that is almost telepathic in nature. "There's a lot of improvisation and playing in the moment when we're together," Erwin says. "The music is different every time depending on how the room feels, how we feel, how the audience feels. There are so many variables that go into it. There are certain landmarks within the songs, but the rest of it is pretty much free game."

"We don't put a lot of restrictions on what we do," Copeland continues. "And that allows up to keep the music fresh and express ourselves openly and completely. Songs become themselves as we play them live."

That open expression has since attracted some fans in high places. In what has already become something like band lore, roughly a year ago they played a particularly fiery set at a 50th anniversary event for Willcutt Guitars in Lexington. Also on the bill? Ace Nashville picker Brent Mason and legendary guitar maker Paul Reed Smith, who were there to conduct a guitar clinic later in the day. That afternoon, Mason wound up accepting an offer from Erwin to join Magnolia Boulevard onstage, where together they ran through the Junior Wells and Buddy Guy classic, "Little By Little" ("not intimidating at all," Erwin says with a laugh). Paul Reed Smith, for his part, was so enamored with their set that he subsequently took the band under his wing.

"Paul has become our champion," says Erwin, himself a longtime PRS guitar player. "Which has just been mind-blowing."

"When I first heard Magnolia Boulevard, I thought 'this band deserves a shot,' says Smith. "So we flew them to the PRS Experience to begin helping them. The first time Maggie sang in my studio on 'Sister' after the band laid down the tracks, she nailed it on the first take. It was quite an emotional moment," Smith recalls.

Currently, Magnolia Boulevard are working under the tutelage of Smith at his recording studio in Annapolis, Maryland, laying down their first batch of professional recordings. In addition to the aforementioned "Ride," they've cut a slinky, excessively funky number titled "Smooth Sailin'" and a soulful slide-infused jam, "Strong Willed Women." There's also the aforementioned stunning, slow-burning ballad "Sister," which is slated to be released as the band's debut single.

"Sister," it's worth noting, stands apart from the band's more improvisatory, jam-infused material. It's the type of song -- and these don't come along very often -- that on first listen can stop you dead in your tracks. "My sister she lives in the hills far away / my sister my sister I'm missing you today," intones Noelle in a voice that seems to rise from the very depths of her being and feels as vast and formidable as those far-away hills. As her voice builds to an impassioned, raspy howl the music follows suit, keyboards swelling and Erwin's slide guitar moaning and screaming. This is modern Southern soul music that is almost hymn-like in nature, and that has forged a deep connection with their fans.

"That song in particular, a lot of people will come to me and talk about how it has affected them," says Noelle, who wrote "Sister" on an acoustic guitar as an ode to her best friend from her hometown of Clintwood, Virginia. "There was one girl who told me after a show that she hadn't talked to her sister in so many years and then they had a really great reunion, because of the song. And there was a mother who sings it to her child before bedtime. And a man who listens to it and thinks about his sister that passed away. There are so many different emotional responses to it."

Adds Copeland, "When we play that one live we see people singing the words and you can just tell that they're thinking about their own histories and their own families and friends. It becomes an emotional moment for all of us."

Which brings us full circle to the communal experience that is at the very heart of Magnolia Boulevard's music. It's an intuitive and intense conversation between musicians that extends from the stage out into the audience -- and that is now set to be shared with the world at large.

As for what happens then?

"My hope is just that people find what we do relatable," Noelle says. "That someone hears our music and it brings up a feeling, whatever that feeling might be, and they can ride that feeling out."

Or, at the very least, forget their worries for a minute or two and just be in this "righteous time to be alive, right here with one another."

Erwin concurs. "I think it was Gregg Allman who once said, 'If there's 10,000 people in the audience and they have one-and-a-half problems each, that's 15,000 problems out there. So if you can put your heart into something and get onstage and help the audience forget about those problems for a couple of hours, then, you know, your job's done. That's the greatest satisfaction one can achieve, I believe."