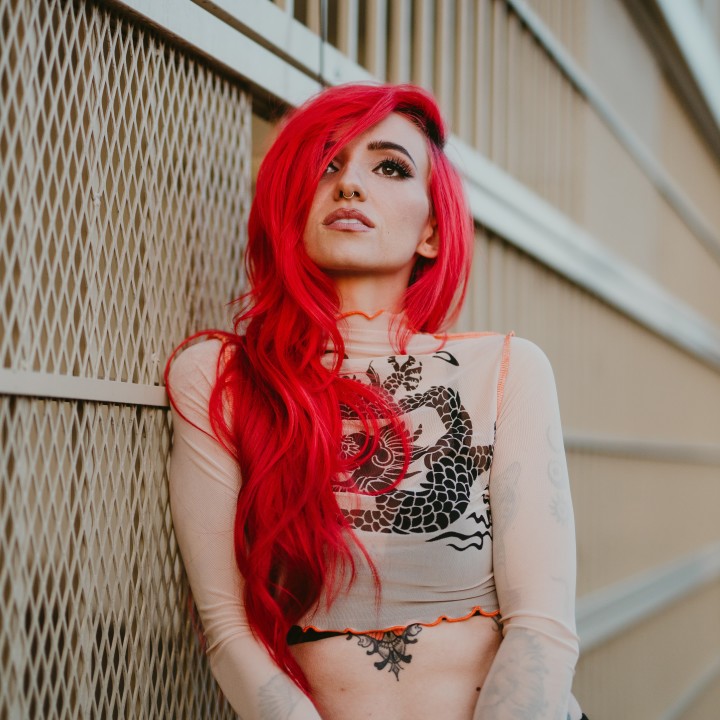 Always pushing boundaries, alt-pop phenomenon Lights has never shied away from a challenge. Through her first three records, Lights built an incredibly passionate fanbase, selling out tours around the world, earning 100M in U.S. streams, 200K in U.S. album sales, and two JUNO Awards, not to mention the 2M + rabid fans who follow her every move online. Yet through this success, she felt like she had more important things to say through her music but just didn't know how to get them out.

Then came En, short for Enaia, a fictional character from a fictional world created in Lights' imagination that is not altogether different from herself. Throughout a year long process, she began secretly working on an unprecedented idea writing and drawing her own comic book based around this alter ego of sorts. And on top of that, just to make things more difficult -- an album to coincide with the whole thing.

The setting for Skin&Earth revolves around the last city left in a post-apocalyptic world that is lost to famine & plague, devoid of hope. A super corporation called Tempest runs everything from the media to the water rations to the schools. "There's a lot of commentary in the story about how we've taken and taken and taken until there's nothing left and that's how this apocalypse has happened and that's why they're in this last bastion of humanity." The environment being a topic close to Lights' heart, she states, "It was awesome. It was freeing." She continues, "That's the whole vibe of the record and the comic. This meandering search for hope in a hopeless world that you really never know what you're gonna get. You really never know what's gonna happen until the end."

Lights received advice from comic heavy hitting friends the likes of Brian K. Vaughan (Y: The Last Man, Runaways), Jamie McKelvie (The Wicked + The Divine) and G. Willow Wilson (Ms. Marvel) on the project. Initially wanting Vaughan to write the book, she says "He reminded me that I'm a writer already. He gave me the faith in myself to believe I could do it."

She seemingly transcended through to a new level of creativity while working on Skin&Earth. "Once you open that part of your brain, you open the floodgates and it never ends. From that day on, a year and a half ago, it has never ended. My mind is constantly flowing with ideas. And I've never been more creative or inspired and I've never had more faith in myself to actually accomplish something."

Growing up with Calvin and Hobbes, Herman and The Far Side, Lights has been a lifelong fan of comics including current favorites like Saga, Pretty Deadly, Bitch Planet, and The Wicked + The Divine which all star or are created by other strong women. Comics have even influenced her music all the way back to her first record, The Listening, with her character Captain Lights. "It's always made its way into my aesthetic and the way my art is. But never to this degree."

The album form of Skin&Earth also brings help from some of music's brightest including Corin Roddick of Purity Ring, Big Data and Josh Dun of Twenty One Pilots. "Everything that happened on this record was really fun and natural and felt like we were all working towards the same goal," she says. "It was this organic mutual fan-ship kind of thing that brought it all together." She continues, "This is the most fun I've had doing a record. I've never felt that I understood a record more and I've never felt like I understood a reason for a record more."

Each track weaves effortlessly between topics of hope, hopelessness and romance including the anthemic first single "Giants" and the gloomy "New Fears" where she says "The sound is generated by the mood of that chapter. Chapter 5 is very moody and dark and the song emulates that." New themes began to emerge for Lights during the writing process as well for this album. "There's a song on the record called "Savage" and there's anger in it -- I've never written like that before," she says.

For advice on how to consume the Skin&Earth record and comic book combo, Lights suggests that "they're better absorbed separately and each of them augments the other. So you can listen to a song on its own and it's something completely standalone. And then you can read the comic on its own and it's standalone as well. But when you put them together and you start to connect the dots, there's something so much deeper there."

Ultimately for Lights, the most important takeaway from the story of Skin&Earth is of a young woman entranced by a spirit that she and she alone must overcome. "This is based on internal, emotional stress and turmoil -- stuff that I've dealt with and stuff that a lot of people have dealt with. I've always believed that all those battles can be fought and you come out of this stronger. And that was the foundation of the story," she says. "At the end of the day, if nothing else, I want people, especially young women, to see in this character a little bit of themselves -- see that an ordinary person can do amazing things and fight battles nobody else can see, and there's no shame in that. In fact, there's a lot of beauty in it."