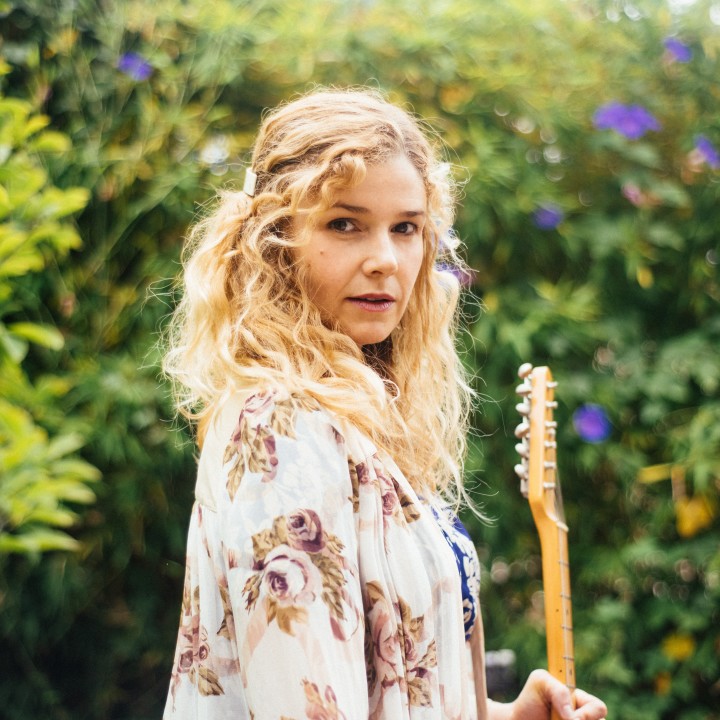 At the center of Leslie Stevens’ music is that notoriously heart-catching voice. She can belt it out grandly when she wants to, but the Los Angeles singer also possesses a distinctively honeyed tone that imbues her new album, Sinner, with a radiant charisma that sparks both ebullient love songs and more intimate ballads.

Stevens’ voice is so beguiling that she has developed a thriving sideline as an in-demand singer who has recorded and toured with a litany of disparate musicians, including Florence + the Machine, My Morning Jacket’s Jim James, Father John Misty, Jenny O., Joe Walsh, Jackson Browne, Jonny Fritz, and John Fogerty.

Stevens might be a singer’s singer, but it is her bold original songwriting that elevates Sinner from a merely dazzling vocal showcase into an artistically ambitious, poignantly affecting and sometimes startling work. The new album is released on LyricLand LLC and out on Thirty Tigers/The Orchard, and Stevens is scheduled to head out on the road for a series of European festivals in August and September 2019. Produced by Jonathan Wilson (Dawes, Roger Waters, Father John Misty) -- who added to the record’s moody atmosphere by playing a variety of instruments (guitars, bass, drums, percussion and even Mellotron) -- Sinner is a stirring statement of purpose by the native Missouri singer.

Stevens’ two previous full-length recordings -- Roomful of Smoke (when she fronted the beloved country-rock combo Leslie Stevens & The Badgers) and her first solo album, The Donkey and the Rose -- led Los Angeles Times to declare that she is “one of the city’s best” and L.A. Weekly to anoint her as Best Country Singer in 2018. But Sinner represents something of a daring step forward for the singer-guitarist. Although the album features such quintessential Stevens folk-pop gems as “Sylvie” and the ethereal consolation of the country-rock ballad “You Don’t Have to Be So Tough,” Sinner also branches out into unexpected territory, like “Teen Bride,” a candied reverie that’s as close as Stevens has ever come to 1950s-style teen pop.

“Teen Bride” floats by so airily, with Stevens’ lulling voice adorned by beams of celestial, churchy organ and wisps of jazzy guitar, that you might not notice that she has deftly sketched a tear-jerking portrait of a tragic teen pregnancy in just a few loaded lyrics (“A God who lied”) wrapped up in a 2:32-minute pop confection: “Song in her head/And he stood like a man/With a rose on his chest/She was with child/With a boy at her breast.”

Even more provocative is “The Tillman Song,” a strangely surreal and passionately raging anthem about Pat Tillman, the popular NFL defensive back who enlisted in the U.S. Army at the height of his career only to be killed in Afghanistan in a controversial friendly-fire incident. The song transcends right- and left-wing ideologies as Stevens blends a reverential appreciation for Tillman’s service with impressionistic imagery that sears and gets to the heart of the matter, even as Jonathan Wilson’s furious hard-rock guitar solos punctuate her rueful words: “I chose to stay and be the artist/And you chose to go and kill/And I have slaughtered my own armies/And you have done no ill/You shouted ‘This war is illegal/And I believe in love’/as the bombs fell into Baghdad/And the hawks came for the doves.”

Like a fever dream, “The Tillman Song” suddenly shifts mid-charge from its Neil Young & Crazy Horse–style sound and fury into a haunting, elegantly unwinding coda as Stevens’ vocals drift chillingly and enigmatically down a hallway of soft echoes and flickers of ghostly guitar: “The soldiers home at Petco/Have put their faith in dogs/Ask them why and they will answer/Because …” Stevens explains that the unusual song is about “heartbreak and manipulation on a devastating scale -- when our leaders betray us with such broad strokes and others are sent to risk their deaths on the coattails of a lie.”

Other key songs include the title track, “Sinner,” in which Stevens murmurs confessions (“I’m not the saint you’ve been hoping for”) in a restrained voice against a muted but pulsing musical backdrop. “The word ‘sinner’ is complex,” she explains about the song. “It’s a word associated with spirituality, but it’s more than that -- it’s this idea of not really being in control of ourselves completely. It’s a betrayal of ourselves to do something we don’t want or mean to do. To some, it means the antithesis of self-love, and to others it means an acceptance of imperfection. ‘Sinner’ as a word can be a complicated judgment,” she adds, “and it’s one letter away from ‘singer.’”

Stevens lets her hair down and relaxes on “12 Feet High,” an amiable ode to getting high. “I try to keep the weakness from my poetry, but it sneaks back in,” she confides against a Stones-y country-blues riff before the chorus kicks in with delirious harmonies. Even a disarmingly sweet country-soul song like “Sylvie” can unfold with open-hearted insights in just a few short lines: “I am walking through the years … All the flowers of the field/Hold the universe revealed.”