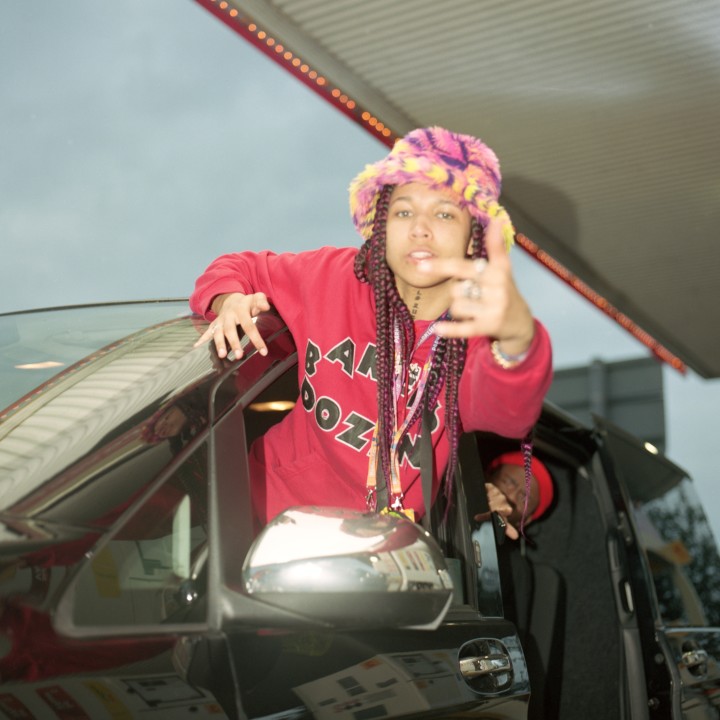 “I’m proud to be from West London” says Lava La Rue, the anagram turned moniker for 21- year old Ava Laurel (The phonetic spelling of her real name Aiwa Laurél.) “The integration here, between the Caribbeans, the Spanish, the Portuguese and Moroccan communities mixed in with the British locals have created generations of dub musicians, ska bands, carnival coordinators and pirate radio pioneers…and despite our constant battle to have the voices of the locals heard, Grenfell a massive example of this, I like to think I’m part of a generation of musicians that continue this heritage and legacy West London carries. The West London sound has always been about fusion.”

The idea of integration, in its many forms, has always been a guiding force for Lava. She grew up mostly under the care of her Grandma, who she says “taught me everything about womanhood, she's a first generation Jamaican migrant and very self sufficient… I never  felt like I needed a male figure” With a British-Jamaican mother and Latvian father, there was one common factor that brought two people from contrasting parts of the planet together  “My parents met at Ministry of Sound in 1997” she explains. “They had this one thing in common, they were part of rave communities, they both just wanted to party.”

It’s a trait she inherited, and Lava credits the myriad of subcultures she was exposed to as a child as the source of her creativity and musical style today. She remembers listening to pirate radio stations with her mum and attending warehouse parties at weekends with her Dad (she went to her first aged 13), while at her grandma’s she’d be surrounded by reggae music, Marvin Gaye or gospel sounds at church every Sunday. At age 16 when she was taken into foster care and moved to Surbiton, she had to create her own culture. “That was really weird for me” she explains. “I'd grown up an inner city kid and lived in an area where my heritage was represented in my local community; then I was moved to this really white middle class suburban area.”

Lava found solace in her new school, Richmond College. “There were so many different cliques” she says, “There was a massive mix between kids who came from Streatham, kids who came from Surbiton and Kingston and Westminster. You have super rich friends, and super poor friends. Up until that point I was a bit in the closet, I wasn't openly queer, and unless someone asked I didn’t feel the need to tell anyone, but there you could just be who you were and there was enough people to find your own group within it”.

In her music technology class Lava found her closest friends. An eclectic group of likeminded artists, musicians and producers who would go on to form NiNE8; a musical and visual arts collective named after the year several members were born. As a collective, NiNE8 create everything from music and clothes to art and parties. “I was really into writing poetry at the time and I read some to my friend Lloyd ‘Mac Wetha’ McDonald, who was like "you should try this over some of the beats I’ve been making. "Collaborating with members of the collective, Lava created her first mixtape Lavaland taking lyrics from diary extracts around the time she moved to Surbiton. Mixing raw spoken word with experimental production, she created her own distinctive yet genreless style. To this day Lava still directs her own videos and releases music through NiNE8, a self-sufficient ecosystem embodying the DIY spirit of the subcultures her parents belonged to.

In the summer of 2017 Lava travelled to Japan and lived in Tokyo for 3 3 months. It was here that she met Japanese producer Disk Nagataki and his crew, Tokyo Vitamin, who invited her into the studio. “It was such a cool crib, he had every Nintendo from Nintendo 64 to now, his bedroom was full of stacks of video games and old VHS. His friends were all rappers, producer or skaters, I said to him, ‘You lot are just like my collective!’” Within a day of meeting Nagatiki, Lava had recorded Widdit, the first song from her latest EP, Letra and a blissed out track combining elements of 90s R&B and UK hip-hop. Returning to London she completed the 5-track EP, a body of work that showcases her fierce politicised wordplay and musical dexterity. In Desktop, Lava muses about capitalism and the commercialisation of black culture in a poignant rap that gives way to sung interlude. “I was doing a lot of self discovery about my culture, and Desktop was like an extended poem” she says. Having found a deeply unique formula, Lava La Rue is redefining UK rap on her own terms. Her latest release, Burn is a club ready track celebrating the resilience of Lava’s community. “I think a lot about legends like Grace Jones and Prince, who are my two biggest influences, they made absolute bangers you wanted to play at parties, whilst also being politically rebellious” she says. “I've always hated the idea that a song can either be political and underrated, or super catchy and really ignorant, but commercially successful. I want to show with my music that you can do both.”