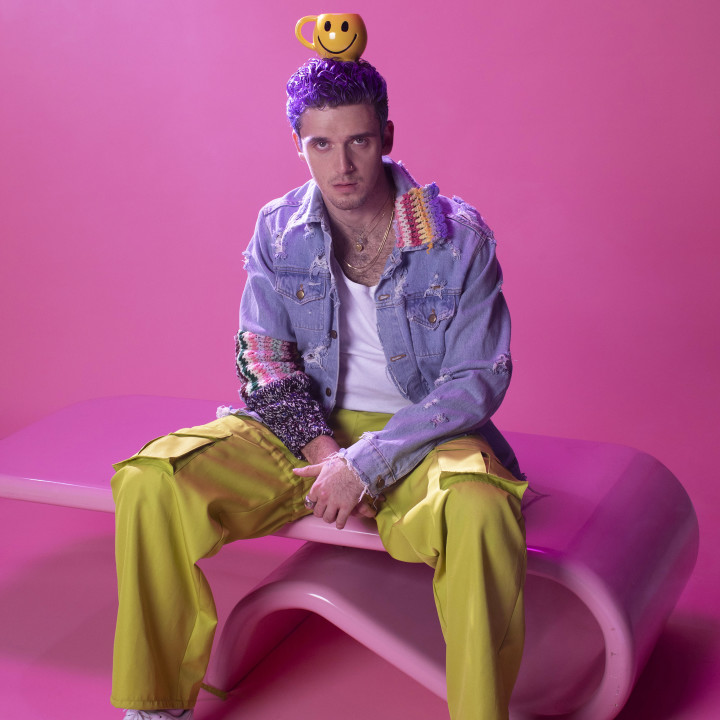 For more than five years, Lauv has quietly and steadily become one of pop’s brightest rising stars. He has released his music completely independently with billions of streams to his name. He has written for some of the biggest stars in the world, performed on late night talk shows, played stadiums opening for Ed Sheeran, and sold out shows in 21 countries as a headliner. And he has done all of this without releasing an album.

That’s about to change, though, when Lauv’s official debut, ~how i'm feeling~, comes out in March 2020. A 21-song tour de force, the project marks a breakthrough, a real moment of arrival, from a young singer/songwriter/producer who Rolling Stone called “Pop’s Up-and-Coming Heartbreak King.”

“This is the first time I’m showing the world different aspects of myself as an artist,” says Lauv. “At first I was a hopeless romantic -- my songs were all about one relationship, one girl. This is so much bigger. The whole concept is born out of an existential, quarter-life crisis. I’m dealing with who I was supposed to be, what people expect from me -- I’m learning to embrace all the aspects of my identity.”

Before Ari Leff became Lauv, he was just another Gen Z teenager trying to get his music noticed on Myspace. From his earliest efforts, his songs addressed his own experiences navigating the sometimes positive, often negatively distorted lens of social media. His music has come to serve as anthems for the millions of teenagers and twenty-somethings who share the same fears and insecurities.

Accepting and celebrating the multiple facets of ourselves, the different personalities we carry with us, is a theme throughout ~how i'm feeling~ -- even extending to the cover art, which displays six different “Little Lauvs” (each with its own color, representing one aspect of himself). It’s like a one-man boy band: there’s the class clown, the hopeless romantic, the existentialist, the fuckboy, positive and spicy Lauv.

Lauv has been open about his own struggles with anxiety and depression, and has taken action on the issue with his Blue Boy Foundation, which supports programs that help young people feel more comfortable reaching out for help with their mental health. He launched the “My Blue Thoughts” initiative, a community building mechanism for fans to anonymously write down or record whatever is on their mind, as a way to engage with people around the world who may be having similar experiences. Lauv is also donating 100% of the proceeds from his single “Sad Forever” to mental health charities, raising over $150,000 to date, as well as contributing $1 from each ticket sold from his world tour.

Lauv first gained attention in 2015 when his Soundcloud single “The Other” went viral, peaking at number three on blog aggregator Hype Machine and hitting Spotify’s Global Top 100 before eventually being certified Gold. After concentrating on working with other artists, Lauv hit again with 2017’s “I Like Me Better,” which reached #7 at Top 40 and #2 at Hot AC and was certified 3X Multi-Platinum in the US and platinum in 12 other countries. “i’’m so tired...” Lauv’s duet with Troye Sivan, has also been certified Gold, with over 500 million streams worldwide.

After his songs were gathered up into the I met you when I was 18 playlist in 2018, Lauv was ranked as number one on Billboard's Emerging Artists chart for more than three months. And all of this was achieved without the support of a major label: He garnered the most spins by an independent artist on Top 40 and Hot AC radio in 2018, and held down the #1 and #2 most streamed pop songs by an independent artist in 2019.

Along the way, Lauv -- who majored in music technology at New York University, and interned at the famed Jungle City Studios -- developed a signature sound, a spare, percolating, keyboard-based electro-pop that mirrored his honest and vulnerable lyrics. But he doesn’t think of himself as having an identifiable style.

“I get surprised when people say that a song ‘sounds so Lauv’,” he says. “I don’t know what that means. I never thought about having a specific sound. What I do is usually more minimal, not a huge wall of sound, but then I add whatever interesting rhythmic or sonic elements.”

He points to “Drugs & the Internet,” a song written during a struggle with depression which became the opening track on ~how i'm feeling~, as a turning point in his writing. “That song was so different for me,” he says, “and it’s when I realized there’s so much more I want to say besides talking about love.

“I used to look at everything really romantically,” he continues. “Like ‘all my songs have to literally be about my own life!” But as I keep writing more, I’ve really opened up to the idea that a song can be about capturing a feeling.”

A key part of Lauv’s triumphant rise has been his collaborations with other artists, both as a writer and a performing partner. He co-wrote hits including Cheat Codes and Demi Lovato’s Platinum-certified smash “No Promises” and “Boys” for Charli XCX. In addition to the duet with Troye Sivan, he released “There’s No Way” with Julia Michaels and, most recently, “fuck, i’m lonely,” with British singer Anne-Marie, which was featured on the soundtrack for the third season of 13 Reasons Why and quickly shot to more than 200 million streams. Also in 2019, he co-wrote “Imperfections,” a single for pop icon Celine Dion. (“It was crazy that she wanted something with my sound,” he says, “it goes to show that a lot of things in music can be so unexpected, and you can’t necessarily pin people down.”)

These creative partnerships have continued to shape Lauv’s perspective on making music. “With everybody I’ve worked with,” he says, “whether or not a song ultimately comes out of it or not, each situation shows me something new about the process of creation and how different artists work. With Ed Sheeran, I saw that it’s very much still about the song, where others get more involved in the visual world and the aesthetics.”

In today’s stream-driven, single-focused music world, you might wonder why a young pop artist needs to bother making an album. But even with platinum plaques already on his walls, Lauv believes that it’s still important to make a larger musical statement and reveal more of himself. “A lot of internet culture is pushing people to have a brand and stick to it,” he says. “But people are so much more complex than that. I was definitely intimidated making this album, though -- fans are used to a certain side of me, so will people vibe with it and accept something different?

“But even just for my own mental health,” he continues, “I needed to do what I want to do, to grow as an artist without being cornered into any one sound or style. And if they’re along for the ride, then that’s great, too.” With millions of fans already on board for his music and his message, and a sound that’s built for a stadium-size audience, it’s sure shaping up to be a wild ride.