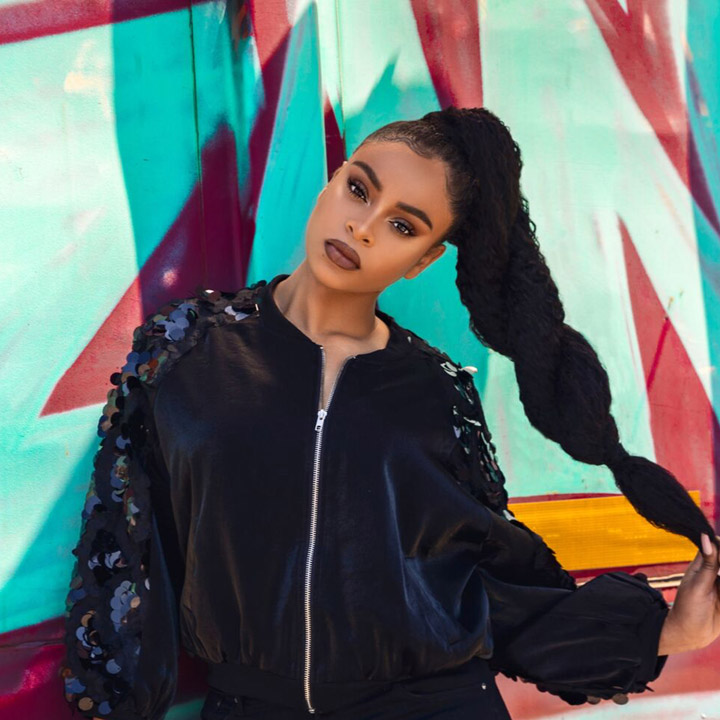 From singing in the church, to her rise competing on NBC's The Voice, to having a number one gospel single, Koryn Hawthorne appears unstoppable. Not surprisingly, Unstoppable is the title of her first full-length album, to be released July 13, 2018, on RCA Inspiration. Singing professionally is all the twenty-year-old has ever wanted to do. But her journey to this point didn't happen overnight.

Like most youth, Koryn grew up singing in church. For her, that church was her family's Lighthouse for Jesus ministry in Abbeville, Louisiana. Unlike most youth, however, her first public appearance took place on a talent showcase in Las Vegas, where she won top honors in her category. From that point on, her parents began looking for other ways to build their daughter's music resume.

Along the way, Koryn listened and learned from the likes of Tina Turner, Etta James, Mary J. Blige, and especially Michael Jackson -- "I used to watch The Jacksons: An American Dream all the time," she says. On the gospel side, her inspirations were Fred Hammond, Mary Mary, and Kirk Franklin, among others. By age eleven, she was auditioning for top television singing competitions, such as America's Got Talent, X Factor and, eventually, American Idol.

As a contestant, Koryn wanted to sing gospel on American Idol but the producers advised her she wouldn't make it very far if she did. Nevertheless, she felt in her heart that singing gospel on the show was the right thing to do. She ignored the warning, sang gospel. . .and ultimately got sent home early. The experience left Koryn so discouraged that when her mother learned that The Voice was holding auditions in New Orleans for its Season 8 competition, she didn't want to go. "My family is very supportive," she says, "and my stepdad, he kind of pushed me to go."

In more ways than one, this time was the charm. Garnering praises with her talents and evolution as an artist during the competition, at just seventeen years old Koryn made it to the finals of The Voice and was part of Pharrell Williams' team. She recalls: "The first thing Pharrell said to me is, 'We've GOT to do gospel,' which was incredible! So the first chance we got, I did 'How Great Thou Art.'"

More than anything, The Voice helped Koryn shape the vision of her artistry. "For me, The Voice wasn't about choosing the best songs, or picking songs to best demonstrate my vocal range, but about choosing songs with the best message," she says. "I thought, 'God gave me this platform and I need to inspire people, even if I'm not here to win.'"

The next goal following The Voice was to sign with a record label. Labels were coming after her. Enter RCA Inspiration, which supports Koryn's desire to be different musically while at the same time expressing a Christian message. "I'm super excited to be part of RCAI," she says. "From day one, we knew it was a good match."

The purpose of Koryn's 2017 self-titled EP and the new album has been to firmly establish her distinctive sonic and lyrical mix. "Jesus is the foundation of everything that I do," she explains. "But I wondered, how can we be different? How can we have a mainstream sound and still inspire people? Keep the message the same, but think outside the box?'

Part of the answer was surrounding herself with like-minded musicians and writers who share her passion for innovation. One was multiple GRAMMY®-winning producer Warryn Campbell. Working with him has been mind-blowing for the young artist. "First of all, it's Warryn Campbell!" she says. "He's a legend! To be able to work on my first project with someone so talented, I am blessed and thankful for that opportunity."

Another is Joaquin Bynum, who helped with some of the writing for Unstoppable. "We call Joaquin 'Bear!'" she laughs. "I never, ever met anyone who just got it! He was such an incredible asset to the writing process."

Writing songs for the album wasn't premeditated; everything took place in the moment. "It leaves room for the spirit to come in and do what it wants to do," Koryn says. "First we always started with sounds. That was Warryn's thing. He would start playing something, we'd catch a vibe off that, and go from there."

Koryn's first hit single, "Won't He Do It," was originally written and conceived for the soundtrack of Greenleaf, the television drama on Oprah Winfrey's OWN Network. "At first," Koryn recalls, "I didn't know if they were going to choose a song that I had done already or if I was going to do a completely new one. But it was a fast process. I got to Atlanta and they sent me 'Won't He Do It.' I listened and thought it was dope!"

She adds: "But the most important thing was for the song to sound like I wrote it myself. So I thought about things in my life, what God has done for me. I don't ever want to sing something that doesn't feel like me. My number one rule is that if you don't feel it, other people won't." Koryn entered the studio and exited an hour later with a completed song. "I honestly never thought about the song going beyond the TV soundtrack," she says, "but it was cool when they said it would be my first single -- and then it went to number one!"

GRAMMY®-winning composer, writer, and multi-instrumentalist Bernie Herms produced and co-wrote "Speak the Name" for Koryn's EP. Since she uses the same management company as Herms' wife, Christian singer Natalie Grant, it was proposed that the two women duet on the Unstoppable version of "Speak the Name."

"I said 'OF COURSE! I love Natalie! She is such a great example for me. It was a match made in Heaven!"

Her RCAI label mate J. Monty offers a rap interlude on "Reasons." "We had finished the song," she says, "but we thought we needed a rapper on the record. I watched one of

J. Monty's videos on YouTube and I was like, 'Yep, get him on the phone right now!'

He's on the same wavelength that I am -- doing gospel, but with music that is completely different."

The title track "Unstoppable" expresses Koryn's relentless pursuit of God's plan in her life. "I feel like God gave me a specific purpose and so no matter what, nobody is going to stop me from doing that. I'm going to fulfill the purpose He has for my life. With God being unstoppable, that makes me unstoppable."

Koryn's fearless sonic versatility is on full display on Unstoppable. To a thumping march tempo, Koryn delivers unflinching warnings to the enemy on "Down Goes Rome," and joins the community of Christians who raise fists of victory on "Warriors." The opening lines of the song, in fact, speak volumes about her purpose as a Christian and an artist: "People dream for money / People dream for fame / We both dreamin' baby / But we don't dream the same."

Yet more challenges to the devil come from the sixties-rock inspired "Running for the Truth" while "Bless Up" is a cool-down melody of love for God who "is the greatest and can't be replaced." Throughout, Koryn's gospel foundation is evident in how she attacks the lyrics and accents songs with well-placed shouts and fervent growls.

Recorded over the course of two weeks, Unstoppable was a transitional moment. "Before, I was a cover artist, but now I was able to step into my artistry. I created a sound and became who I am as an artist. I became -- I was -- in that moment."

Koryn puts herself into every song she sings so the audience feels the emotion. In turn, the songs minister to her. "In the industry, there are a lot of naysayers and negative comments, like when I was auditioning for the reality singing shows. Even just coming into the industry with this new sound, because I'm so different, being a new artist, expressing what I want to do, some were hesitant or thought it would take a while for me to build up to something." She laughs, "Clearly the devil is a liar!"

Koryn will be in the midst of the Summer Lights Tour when RCA Inspiration releases Unstoppable to the public on Friday, July 13. In addition to the summer tour, the rest of 2018 will be busy. She will be appearing at church events -- "that's home, that's my foundation" -- as well as at festivals and other programs and tours. She will appear on Season 3 of Greenleaf.

"Singing was all I ever wanted to do," Koryn Hawthorne reiterates. "I didn't know how it would happen, but I had faith this was where I would be. I believe God had a plan for me and with Him all things are possible."