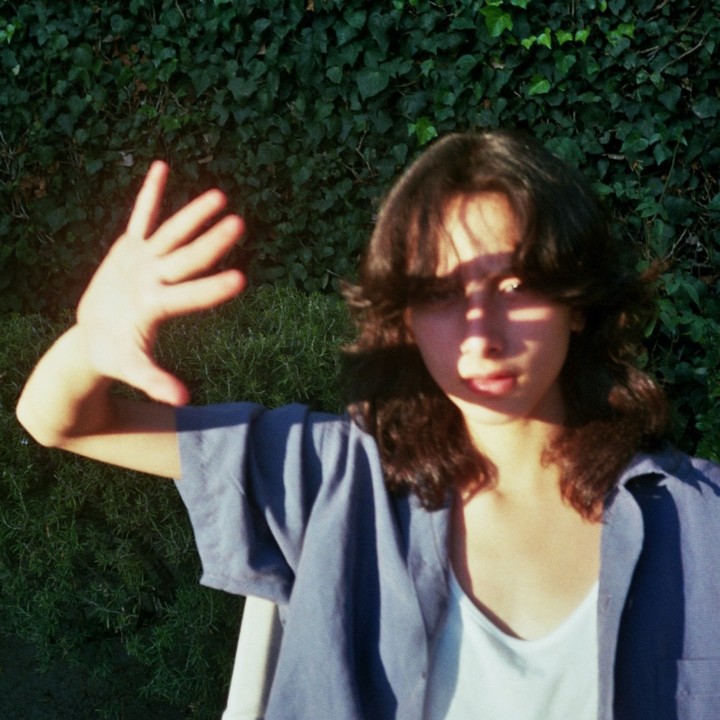 "I don't know how anyone could not like music," says KALI, the 16-year-old singer, multi-instrumentalist, and producer whose debut EP Circles is coming soon. A few years ago, KALI began writing and recording glistering, catchy indie-rock songs in the bedroom of her family home, a rent-controlled apartment in Santa Monica, until she received a noise complaint and moved to a small lockout studio. "Landlords don't like rent-controlled tenants," she says, regretfully.

For KALI, music is a foundation. At an early age, her parents acknowledged her musical inclinations, putting her in piano lessons at the age of four. Her heart had been set on the guitar, which she now plays as well as bass, keyboard, drums and violin, but agrees that piano lessons were a fit place to start: "It was a great idea because it's the center and the foundation of everything theory-wise." A prodigy of sorts, KALI grew up playing recitals and covering Beatles songs, taking private lessons with music teachers and going to after school music programs, and even taking songwriting masterclasses to nourish her passion. In 2017, KALI assembled her first band, Big Wednesday. Intuitive and eager, she taught herself how to use Garageband and began writing and demoing songs that she would later teach her bandmates for their shows. Their relatable and honest indie-surf arrangements drew sweaty, teenage crowds to local venues like The Smell and The Viper Room.

Today, KALI spends the earlier part of her days getting through her independent study high school program on Zoom, and finishes her afternoons and evenings at the studio working on new music. "As I got older, I started to have experiences that were much more emotional and personal, and songwriting became an actual necessity instead of something that was fun for me to do," KALI explains, describing the gut-wrenching introspective process that led to her solo project as KALI, and her new EP Circles. "Sometimes it's so hard to articulate how you feel in life, and songwriting is like a vehicle for me to express myself and get my thoughts out," she says. "It brings so much clarity." KALI's songs are boundless, magical, and honest. They emphasize dramatic loops and meditative open space, creating emotionally complex environments with entrancing repetitions and moments of sonic simplicity. Her vocal melodies, both intricate and vast, nearly float above a blend of alt-rock sounds, from shoegaze to psychedelic rock and dream pop.

Wise beyond her years, KALI was inspired by the turbulence of her first on-and-off relationship -- Circles is a vulnerable portrayal of teenage emotion in all its complexity and lesson-bearing potential. "It was so foreign, these feelings of compassion and infatuation, not knowing if you're doing the right thing and wanting things to be better," KALI says about the tone of her EP. She draws from her daily life acutely in her music, referencing things her friends would say in lyrics, sampling phone conversations as she does on the EP's buoyant opening track "Back to the Start," and experimenting with distortion and repetition to emulate the circular essence of releasing and regaining feelings for someone you know isn't right for you.

KALI says listening to early aughts guitar-driven bands like The Strokes and Arctic Monkeys helped her with self-expression on the louder, angrier "Too Tired." "It came out like liquid," she recalls about the cathartic "I Just Wanna." Elsewhere, she drew from a playlist she'd made featuring the sombre of Billie Holiday and Chet Baker for the raw, stripped down "Someone to Hold." KALI's most recent track "Again" -- one she says brought her closure -- closes out the EP, creating the perfect circle. "Emotions and feelings come and go and fluctuate, and it's important to accept that -- that's what that song was for me," KALI says. "When I think about this project, I want the message to be communicated that it's OK. Things change. People change. Situations change. Feelings change," she adds, touching on what making music means to her. "It's especially important with people my age because there's so much awkwardness and insecurity at this point in our life. There's this fear of the unknown. We really haven't lived that long, so it's scary having these weird experiences, but they're all okay."