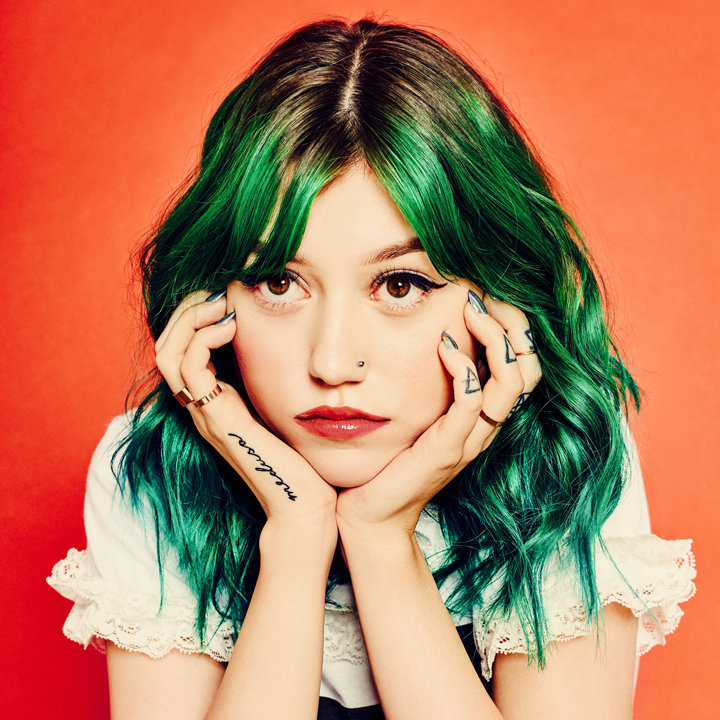 This ominous statement reveals quite a bit about the tattooed, green-haired, and anime- obsessed 19-year-old Phoenix-born and Los Angeles-based gothic pop siren. Her delicate delivery entwines with blood-soaked lyricism and conjures up a new kind of sonic magic, casting a spell between seemingly disparate and dynamic extremes.

“There’s a dark contrast,” she affirms. “My first name is Kailee, and it sounds bubbly. I chose Morgue, because it gives you the opposite sentiment. That feeling really comes across in the music.”

A self-described “introvert” and the second oldest of six kids, Kailee found solace in the sounds of fellow sonic sorceresses such as Stevie Knicks and Gwen Stefani as well as Pink Floyd, Led Zeppelin, and more. By the age of ten, she picked up her first guitar, began quietly penning music, and eventually started posting tracks on Soundcloud.

Between a gig at Jack in the Box, an 18-year-old Kailee found the beat for “Medusa” on YouTube back in 2016. She recorded her vocals, uploaded it to Instagram at two in the morning, and amassed over 100,000 “likes” overnight. With a singular spark, the tune’s minimal production brushes up against her impassioned delivery as the hook immediately transfixes.

“I was messing around with sounds that weren’t acoustic,” she recalls. “I wanted to create a story and paint a picture with words. I heard that first line in a movie and just had to incorporate it into that beat. It shows vulnerability and creates a different take on Medusa. In mythology, Medusa was cursed with snakes for hair and a hideous face over something that wasn’t her fault. It’s actually a tragic story, but people perceive her as a monster. So, she takes on the leadership role of the ‘broken’ in the song.”

As “Medusa” became an underground phenomenon, she inked a deal with Republic Records in the summer of 2017. Upon signing, she immediately hit the studio with producer CJ Baran [Melanie Martinez, Panic! At the Disco, Carly Rae Jepsen] to write and record what would become her 2018 major label debut.

Her world just starts to open up now.

“When you listen to my music, I want it to surround you and given you an understanding of not only what you’re listening to but yourself,” she leaves off. “I hope the songs put you in a happy state of mind and distract you from whatever you’re going through. That’s my vision for all of this.”

Kailee Morgue’s spell has been cast and pop might never be the same. Now, “there’s blood in the water” forever.