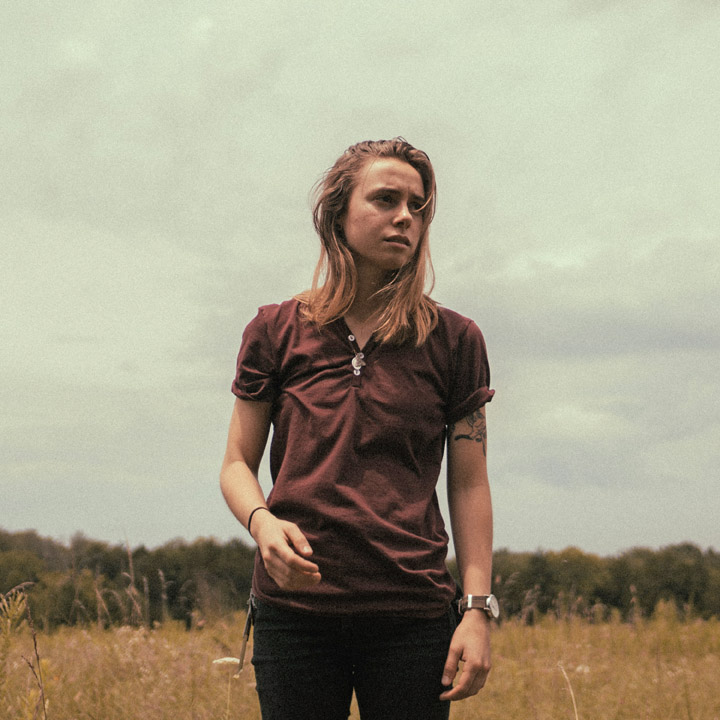 Julien Baker’s solo debut, Sprained Ankle, was one of the most widely acclaimed works of 2015. The album, recorded by an 18-year-old and her friend in only a few days, was a bleak yet hopeful, intimate document of staggering experiences and grace, centered entirely around Baker’s voice, guitar, and unblinking honesty. Sprained Ankle appeared on year-end lists everywhere from NPR Music to The AV Club to New York Magazine’s Vulture.

With Turn Out The Lights, the now 21-year-old Baker returns to a much bigger stage, but with the same core of breathtaking vulnerability and resilience. From its opening moments — when her chiming, evocative melody is accompanied by swells of strings — Turn Out The Lights throws open the doors to the world without sacrificing the intimacy that has become a hallmark of her songs. The album explores how people live and come to terms with their internal conflict, and the alternately shattering and redemptive ways these struggles play out in relationships. Baker casts an unflinching and accepting eye on the duality of – and contradictions in – the human experience, at times even finding humor and joy in the midst of suffering. She ultimately calls on her listeners to move beyond “good” and “bad,” or “happy” and “sad,” to embrace more complex truths.

The album was recorded at the legendary Ardent Studios in her hometown of Memphis, TN, and mixed by Craig Silvey (The National, Florence & the Machine, Arcade Fire). This evolution from Sprained Ankle’s intentionally spare production allowed greater scope and freedom for Baker, who is still the album’s sole writer and producer. Strings and woodwinds now shade the corners of her compositions, and Baker takes to piano rather than guitar on several tracks. In songs like the epic “Claws In Your Back,” these new textures push Baker’s work to cinematic heights of intensity.

As always, the real draw is her songwriting and lyricism. Turn Out The Lights is more expansive in sound and vision than Sprained Ankle and illustrates significant growth, yet the album retains the haunting delicacy of her heartbreakingly confessional style. Where her debut focused inward on Baker’s life and aspects of her identity (female, queer, Christian), Turn Out The Lights reflects on not only her own experiences, but also the experiences of those closest to her. The result finds Baker narrating a deliberate meditation on how we each try to deal with our ever-shifting mental health, and the impact this can have on both ourselves and others. The album sets out to address how the process of coping with internal conflicts affects different relationships – romantic, familial, and friendly. Baker turns outward to embrace the challenges of the human experience, weaving personal struggles together into one surprisingly hopeful chorus.

The album is bookended by “Appointments” and “Claws in Your Back,” two songs that deal with the precarious balance between nihilism and realism. “A lot of stuff happened in my life that was rapid change, and it felt like it could not get any worse,” Baker says of “Appointments.” “I was like, I have reached critical mass for this amoeba of sadness and it cannot possibly turn out all right. But for the sake of my continuing to exist, I have to believe that it will.”

The resulting song (“I think if I ruin this, then I know I can live with it,” Baker sings) cuts to the core of Baker’s uniquely clear-eyed take on human suffering. She resists facile conclusions and never glamorizes the extremes she depicts; yet she continually holds out the possibility of joy and solidarity. On “Claws In Your Back,” she turns her own hard-won determination to thrive into a rallying cry for her friends (“I think I can love the sickness you made. I take it all back, I change my mind. I wanted to stay”).

Even as Turn Out The Lights explores broken relationships (“Sour Breath”), the search for a cure that may not exist (“Everything To Help You Sleep”), and the impossibility of ever truly understanding each other (“Shadowboxing”), Baker continually returns to the possibility of joy. “I don’t believe in the ‘fixing’ part, where what healing means is that you no longer get sad or experience grief or have panic attacks,” Baker says. “Happy is kind of a fleeting and transient emotion. It is not a destination that you can get to by exerting enough mental effort. I believe that joy is something that you can invite into your present circumstance. Whereas happiness seems to be this horizon that’s eternally getting further from you, joy is something that you can inhabit.”

It’s this call to joy even in moments of otherwise total darkness that makes her music a refuge for her fans. Turn Out The Lights is ultimately a healing experience, and it’s impossible not to feel Baker’s unyielding compassion for the messy and beautiful human experience. “When I talk about things in myself I find ugly and unlovable, they are the most effective tools for connecting with other people, for helping other people heal,” she says. “And that helps me heal.”