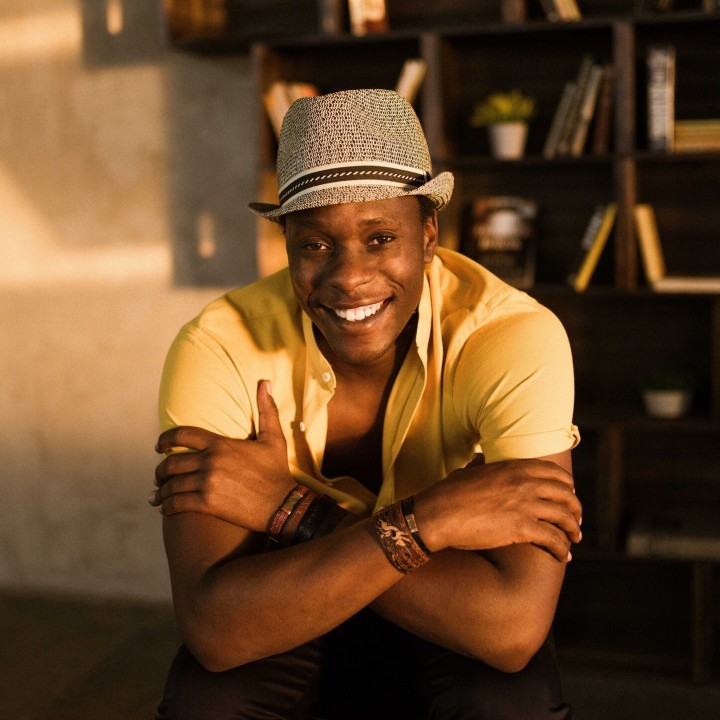 Vocalist, songwriter and multi-instrumentalist Jon Muq makes soul-filled pop music that celebrates the magic of human connection, love and the world's many wonders.

Rooted in the vibrant simplicity of guitar, piano and his lush, cavernous voice, each tune overflows with memorable melodies and deep grooves. His personal lyrics demonstrate his talent as poet and invite audiences into captivating stories of his experiences and his vivid inner world. Jon's honest, fresh recordings and captivating live performances magnify the expansive and emotional range of his acrobatic voice that soars amidst inventive, playful arrangements. His joyful work mingles traditional instruments with a spectrum of sounds and rhythms from around the globe and reinforces the power of a song to transform the spirit.

Jon's music carries listeners on an artful journey through his remarkable life, which began in a small suburban slum in Kampala, Uganda. He first felt the gravitational pull of the creative life as a small boy. Sitting in his leaky-roofted two-room house in Mutungo with no running water or electricity, he began to dream up stories and songs as he listened to conversations between his parents and sisters late at night, staring at the simple beauty of the moonlight through cracks in the roof. When he started school, he found himself getting in trouble often for returning home late in the evening because he stayed behind to listen to the school band play. He fell in love with the co-mingling of trumpets, drums and trombones. When he was invited by the bandmaster to join, he almost immediately picked up trumpet by ear and quickly became one of the group's best players without learning to read music.

Though Jon transferred to a boarding school without a band at age 11, he felt inspired by the sweet, mysterious sounds of the school choir and their drum accompanists practicing in a nearby building each night. After sneaking into one of their rehearsals, he was invited to play an African shaker on some of their songs for the inter-high-school choir competition, an experience that ignited his passion for voice and eventually led him to join the choir as a singer. He began to discover new music from around the world, and he felt especially moved by pop songs like "We Are The World" because of the way they combined many different voices.

At the same time, Jon moved schools again to finish high school in another town and began to live on his own, picking up odd jobs to support himself and also pay for college, eventually moving in with his uncle and twin sister. As he walked alone on the streets between school and work, he would sing to himself, fine-tuning his sound and making up his own songs. One evening he passed someone playing a guitar, which he had never heard, and he felt instantly drawn to it. For several weeks, he walked five miles every day just to hear this guitarist and eventually borrowed a guitar and began to teach himself while he was at work. Since he could not afford a guitar capo, Jon fashioned one out of a pencil and a rubber band to transpose the sounds of the instrument as he continued to evolve his playing, singing, songwriting and live performance technique.

During this period of self-study, Jon committed to becoming a professional musician. He eventually auditioned for a job singing for guests in an upscale hotel, earning a regular four-hour slot. Without a microphone or an amplifier, he sang at the same hotel two nights per week for a year during dinner service. He moved out on his own for the first time, practicing music in his room, and after college graduation, he songs in English for the homeless -- mostly children. His friend recorded videos of him singing on the streets of Kampala and shared them to Facebook. It was through these videos that he was discovered by Norwegian Cruise Line in the US and hired as a featured performer.

Jon left Uganda for the first time in his life in 2017 and began to sing six days per week on a cruise ship that traveled between Florida, the Bahamas and South America, earning awards from the company for his outstanding artistry and establishing himself as a leader on board. Excited by the promise of a rejuvenated life in the US, he looked for ways to stay in the country beyond his contract to continue to build his music career. He found connections with old friends in Austin, Texas when he came to play a benefit performance for Casa Marianella, a community organization that provides shelter and legal assistance to immigrants granted asylum.

Now based in Austin, Jon has found a strong creative community to nurture his powerful talent. An all-around artist whose talent reaches beyond the world of music, Jon has a degree in Industrial Art and Design and is well versed in African design, jewelry making and mosaics, which add a visual dimension to his songs. He has also continued to devote time to charitable organizations in both Uganda and the US, working with non-profits and community programs that provide education, food, clothing and support to those in need.

Aside from guitar, Jon also plays ukulele, piano and a colorful range of African instruments. His proficiency on multiple instruments, love of experimenting with different musical textures and incomparable ear help him create one-of-a-kind songs offering contagious melodies and stunning surprises. Fascinated by life's small but extraordinary moments and the compelling human stories that inspire his own songs, Jon is driven by his mission to bring happiness to the world and support others who are looking to find a nurturing and inclusive place to express themselves within their communities and the larger world.

Jon is currently in the studio writing and recording new music and will release his debut album in 2020.