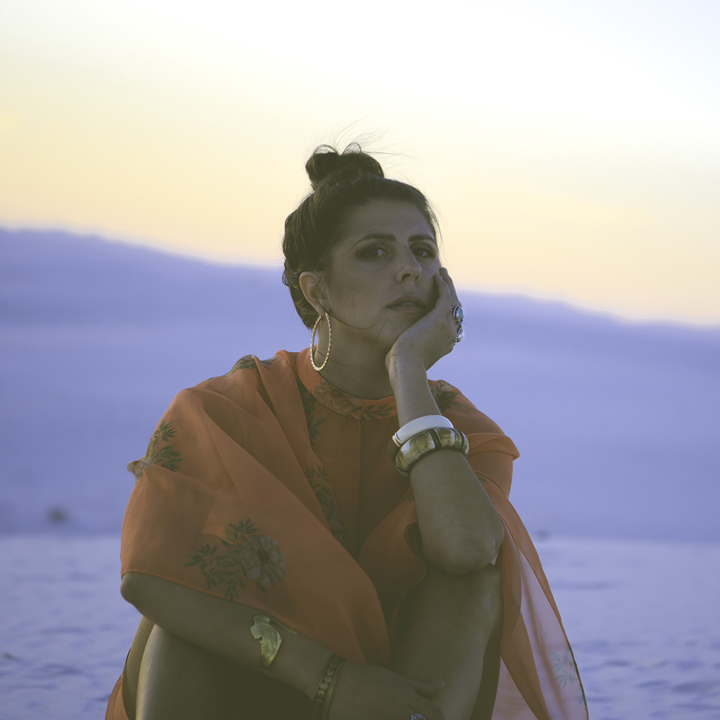 With her nuanced lyricism and shapeshifting vocals, Nashville-based singer/songwriter/pianist Jillette Johnson is the rare artist who needs little sonic accompaniment to make an indelible impact. Produced by Dave Cobb (the Grammy Award-winner known for his work with Jason Isbell and Sturgill Simpson), Johnson’s sophomore album All I Ever See in You Is Me offers up sparsely orchestrated songs centering on her spirited piano work and graceful vocal command. Like only the most timeless songwriters, Johnson finds infinite depth within that simplicity, tapping into her quiet intensity and classic sensibilities to capture the subtlest of feelings.

Recorded at RCA Studio A—the historic Nashville space where Dolly Parton laid down “Jolene” and “I Will Always Love You” in the same three-hour span—All I Ever See in You Is Me bears an unhurried pace and warm intimacy that echoes the purposeful looseness of its production. “We didn’t overthink anything—we just went in and tracked the songs live and stuck with our instincts, then drank a lot of tequila when we were done,” says Johnson. “It wasn’t a high-pressure situation at all, and because of that there’s a humanity to the album that feels really good to me.”

At the same time, All I Ever See in You Is Me unfolds with an eloquence that reveals Johnson’s natural sophistication as a songwriter. Drifting between hazy romanticism and resolute self-awareness, the album examines heartbreak and resilience with a willful vulnerability. From song to song, Johnson heightens that emotionality with the ever-changing texture of her voice, an instrument that’s irresistibly powerful whether she’s belting out a refrain or whispering a hushed melody.

On “Bunny”—the starkly arranged opening track to All I Ever See in You Is Me—Johnson’s soulful voice climbs and descends as she details her lifelong determination to create music that’s true to her heart. “I’ve been making music since I was a little kid, and it’s always just been about the fact that I love writing songs and playing them for people,” says Johnson, who’s now 27. “‘Bunny’ is about reminding myself of that, and remembering that—no matter what happens—I’ll always have the ability to keep doing this thing that I love so much.”

Throughout All I Ever See in You Is Me, Johnson also channels that sense of self-possession into songs like “Love Is Blind.” With its determined groove and gauzy guitar tones, the track finds her fiercely embracing independence (“You think you can fix this crack, build a future from the past… I’d rather be alone”). Sparked by a solo getaway at a cabin in Joshua Tree, “Throw Out Your Mirror” brings Johnson’s stirring delivery to a measured exploration of self-image. “While I was there I realized that I hadn’t looked in the mirror in a week, and it felt amazing,” she says. “So many people, especially women, have had the experience of feeling like your only value is how you look—and if you don’t look good, then you’re not worth anything. Removing that element made me realize how important it is to focus on the things that matter, and to try to see yourself the way you’re seen by the people who love you.”

Another introspective yet outwardly searching track, “Flip a Coin” first came to life soon after Johnson passed through the city of San Bernardino during the December 2015 mass shooting, and eventually evolved into a defiant meditation on the culture of fear. “In a way we’re always in that place where it seems like the world might fall apart, but it seems to be at the forefront of a lot of people’s minds right now,” says Johnson. “‘Flip a Coin’ was written when my mind wouldn’t stop spinning about how fucked-up that fear is, and since then it’s become more about how crazy it is that someone’s snap decisions can control the fate of the world.”

At the heart of All I Ever See in You Is Me is a selection of songs born from Johnson’s thoughtful fascination with those she loves most. “Like You Raised Me” dreams up a beautifully piercing portrait of her parents, its lilting piano lines meeting with lyrics that achieve an untold complexity in their tenderness (“Don’t you see the you in me?/Scares me half to death/I hope to be half that lady”). And on the string-laced and softly confessional title track, Johnson finds herself gaining a new understanding that feels both heavy-hearted and hopeful. “It’s about recognizing that I have all these ideas about the people in my life, about who they are and what they’ve been through—and then realizing that it’s all just my own vision,” says Johnson. “Whatever I think they’re feeling, on some level it’s just me projecting my life onto theirs.”

Born in San Francisco but mostly raised in Pound Ridge, New York (“a tiny little town in the woods an hour outside the city”), Johnson points out that her family’s unending support played a major part in her pursuit of music. After taking up piano at age five, she made her first attempts at songwriting when she was eight. “I was always singing and making up songs for myself, wandering around alone by the sandbox or whatever,” she recalls. Naming artists like Carole King, Harry Nilsson, and Paul Simon among her earliest and most enduring inspirations, Johnson notes that her musical disposition may also have hereditary origins. “My grandfather loved to play the piano and sing and write songs, and after he passed away I realized that he was probably a really big influence on me,” she says. “I keep learning these things about him, like how he was a vagabond and loved Native American art and loved the West—all of these things that set my heart on fire and that I found on my own as an adult. If there’s such a thing as art being in your blood, then I think he might have passed something down to me.”

At age 12 Johnson began playing shows at the East Village’s famed SideWalk Cafe, and within several years found herself gigging in Manhattan on a near-daily basis. After moving to the city at age 18, she continued honing her songcraft and released her debut EP Whiskey & Frosting in August 2012. With her full-length debut Water in a Whale arriving the following summer, Johnson then spent several years touring (including runs with Delta Rae, Mary Lambert and others) and carving out new material. “I’m the kind of person who writes songs all the time,” she says. “I’ll just get flooded with words, usually late at night, and it’s almost like I’m putting together a lullaby for myself. When I get in that zone, I’ll write three songs in a day and only stop because I have to sleep.”

But while Johnson’s process has essentially remained the same since she started writing songs, a newfound sense of confidence closely shaped the making of All I Ever See in You Is Me. “I got to the point where I realized that if I want to show people who I am as a musician, I have to stand up for my music and how I want it to be presented,” she says. “A lot of times female musicians aren’t expected to speak up for themselves—but once I did, there was this huge shift. And because of all that, I feel like I’ve finally made the record that I’d always wanted to make.”

The triumph of that fully realized vision is palpable on All I Ever See in You Is Me, an album that ultimately transforms the most intimate experiences into songs with a sweeping emotional power. Noting that she’s continually driven by the urge to “create something that magnifies a moment,” Johnson draws endless joy from that push for transformation. “To me songwriting feels like a combination of an old friend and a new romance,” she says. “I always get so excited by that feeling of possibility that happens when I start to see something good inside of a new idea. But at the same time, it’s all so familiar to me. I really like to move around, I’m always traveling and always leaving, but—apart from my family—music is the one thing that I can always come back home to.”