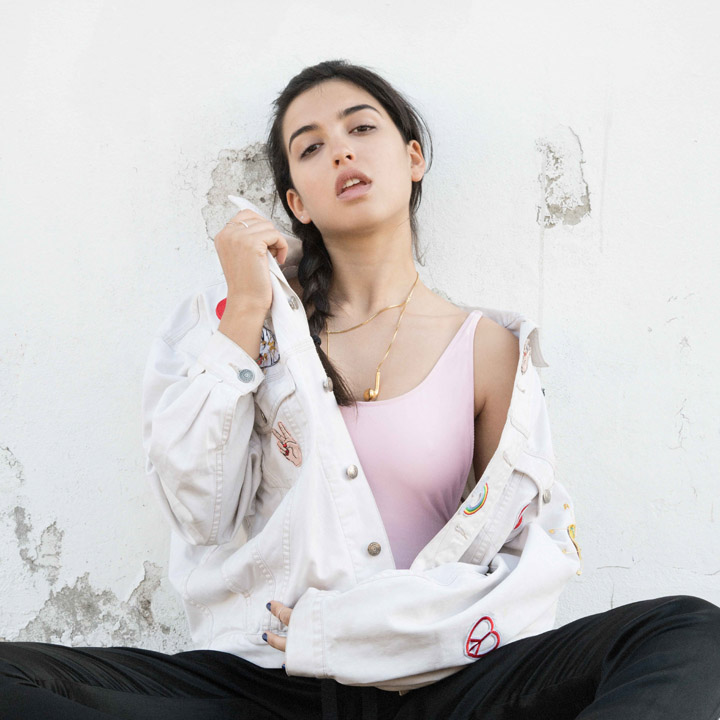 There are some artists out there whose musical output leads you down a path, a path so rich and self-assured that it can become a tapestry that is layered and adorned with artistic influence, passion and creativity; it twists and turns and acts like a tell or rather, a tour of their musical passage. At just 23, Jess Kent is one of those artists, also known as, the real deal.

Born in Darby, England, Kent's childhood was rich in sonic influence. The daughter of a rock guitarist, Kent picked up the axe herself at seven-years-old, and was exposed to an array of Brit-pop, rock and reggae-leaning bands -- counting The Police, The Clash, The Who, Blondie, Peter Gabriel, Phil Collins and Bob Marley and the Wailers as some of the artists who formed her earliest musical influences, coupled with memories of attending gigs as a kid with her dad, of course. "We listened to all the classics at home, but for some reason, I always had an affinity with playing reggae," she remembers, adding that she had much respect for the new-wave, post-punk treatment that bands like The Police and Blondie gave the genre.

Naturally, as a pre-teen musician, the classics weren't her only jams. "I lived a sort of double life, in a musical sense," she laughs. "I also listened to a lot of pop bands and girl groups, like Atomic Kitten and S Club 7. I would go to school and create dance routines with my girlfriends to this kind of pop music as well. I always was trying to get my friends to audition for [UK TV talent show] 'Stars in Their Eyes.'"

Kent always knew she wanted to be a musician, so she took to performance like a moth to a flame. After moving to Adelaide at 11 years of age, the young guitarist and her brother would seek out performance opportunities, cutting their baby teeth busking in the streets of the city, playing at parties and family get-togethers and entering talent competitions. "We were too young to get into gigs," she explains. "We would be like 'What can we do? We'll just busk out the front!'" This experience and sheer desire to entertain helped develop the magnetically confident on-stage persona Kent is fast becoming known for now.

"We learnt what we could do to build crowds," she recalls, smiling. "We ended up having more fun with it, like and it just became a game to us. We had our routine down pat, the pack up, the set up. We would have a 30 minute set, with around four or five hours' worth of material." From this young age, Kent realised that, for her, music was a medium to connect with people -- an attitude and approach that has only flourished as she'd gotten older and more confident in her songwriting abilities.

Eventually, after a short flirt with university, Kent, jumped in the deep end and made the decision to seriously pursue music, via the only ways she knew: gigging, busking and uploading short performances to social media. "I moved to Sydney by myself, just to be somewhere fresh," she recalls. "I told myself I would start with what I know, just try to get gigs. I would literally catch trains for hours and hours, and spend my last ten dollars on transport tickets to get to the studio." She shrugs. "It was actually kind of fun, I knew I was here for a reason, so I had to make it work."

While the gigging and studio time helped finesse Kent's songwriting, it was her social media uploads that put her on the industry's radar. "I would just upload little sound bites and covers to Instagram, Snapchat and Facebook," she explains. "Then one day my now-manager's wife saw my videos, and I guess that's how it all started. From Instagram, basically." This virtual meeting, led her to compose breakout hit, "Get Down," which, after two years slogging it out in Sydney, earned Kent the prestigious title of Triple J Unearthed Winner and a spot on the Field Day 2016 lineup, alongside Disclosure, The Wombats and more. At the time, Triple J said, "'Get Down' basically positions her as Sydney's answer to Lily Allen or Santigold, mixing pop smarts, touches of grime, reggae, and hip-hop in a song about growing up as a teen in the 'burbs."

Flash forward to now, on the eve of the release of her EP, My Name Is Jess Kent and the Sydney-based brunette is proving that the hustle indeed pays off. Not only have the singles "Get Down" and "The Sweet Spot" been added to high-rotation on various radio stations, Triple J included, but 2016 has also seen Kent hit the stage at heavyweight festivals like Field Day and Splendour in the Grass (where she joined Flume for his closing set), and is soon to add Laneway Festival to that list. Kent has also garnered fans in will.i.am, Shamir and Coldplay (whom she's supporting on tour later in the year) and had her name prefaced with "one-to-watch" too many times to count.

My Name Is Jess Kent is as confident as the title suggests, with a sound that proves the EP could not have had a better title. Working with acclaimed music producers Andrew Klippel (Asta, The Sleepy Jackson, Chaka Khan), Dann Hume (Troye Sivan, Snakadaktal, Sticky Fingers), Nicky Night Time (of Van She fame) and Sam Littlemore (Gwen Stefani / Peking Duk / Pnau), the EP boasts flashes of reggae, energetic early 2000s-esque beats, Brit-pop undertones and coolly pared-back tracks that balance the fine art of the chill banger; all topped off with Kent's smart and observational lyrics. "Sonically speaking, I listen to a lot of different types of electronic music, from hip hop to techno," says Kent. "So I like to think of my approach to songwriting as this constant fusing of the older foundations of my influences with what I'm into now, contemporary-wise. I try to think of it as this: imagine James Taylor or Sting as songwriter, Andy Summers' harmonies on guitar, and then, me: a 22-year-old girl with this huge set of unique life experiences and influences." She pauses. "How would I channel all that? What would that sound like? That's how I think of My Name is Jess Kent."