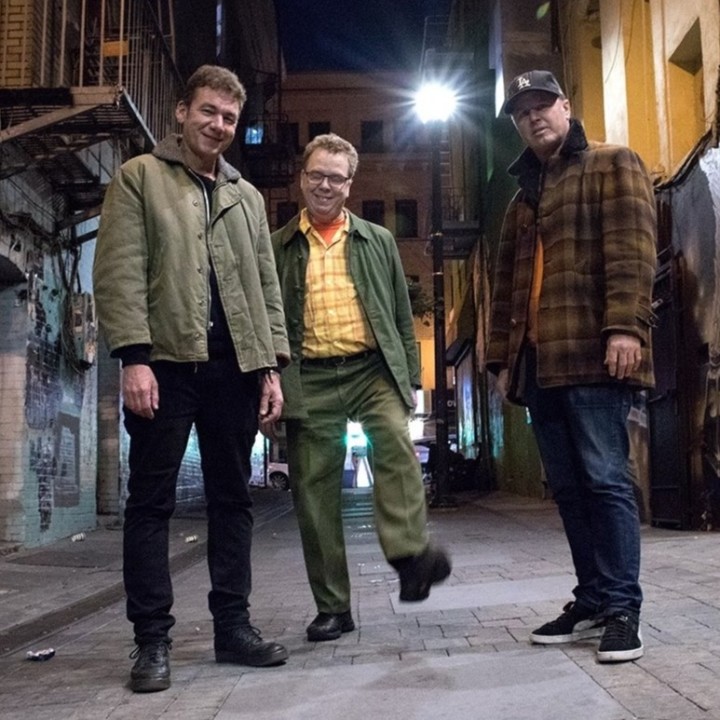 1987
The three spent the following summer in L.A. They found another singer, practiced, played some parties and recorded a demo tape as Thump. Blake and Chris went back to NYU in the fall while Adam stayed to attend UCLA.

1988
Blake and Chris opted to take the year off from school in the hopes that they could do something with the band in L.A. The foursome continued as Rise, recording another demo that they sent off to Maximumrocknroll and Flipside. Blake eventually found his voice and they decided to try it as a trio.

1989
"Shield Your Eyes" was brought to the attention of Shredder Records. There was already a band called Rise, so a name change was necessary. "Jawbreaker" wasn't vehemently opposed or found to be too offensive, which is to say the name was born by a relatively uninspired process of elimination. Its definition suited them- a hard candy; a machine used for crushing rocks; a name hard to pronounce. The World's In Shreds Volume Two 7" was Jawbreaker's first appearance on vinyl. Its cover art is adorned with fliers from shows they had never played. Jawbreaker made a third demo and started playing out. Their first show was at Club 88 on March 16, 1989. They played the club circuit in the following months, recorded the Busy 7" single for Shredder and put out the three song 7" Whack & Blite E.P. on their own Blackball Records. Two summer mini tours to Northern California and another tape made for posterity marked the end of Chris and Blake's sabbatical. They returned to New York to continue their studies. The band vowed to write, practice, record and tour during school vacations.

1990
Jawbreaker's first full-length release, Unfun (Shredder), was recorded with Richard Andrews over winter break. Blake and Chris had flown back west, taught Adam the new songs and recorded in about a week. The record helped Blake book Fuck '90, their maiden U.S. tour the following summer, after which they took time off to finish school. Adam re-mixed some of the old demo songs and released them to various independent labels.

1991
After a much needed recuperation period, a reunion show was staged at CBGBs. All three members graduated by June. Blake earned his degree in English literature and creative writing; Chris in philosophy and literature and Adam in history. Jawbreaker moved to San Francisco's Mission District, where they worked and played. Soon after relocating, Jawbreaker recorded Bivouac, their second LP for Tupelo/Communion Records.

1992
Despite a string of hospitalizations (Blake had surgery to remove a benign tumor on his vocal chords; Adam had arthroscopic knee surgery and Thoracic Outlet Syndrome that collapsed a vein in his arm), Jawbreaker toured incessantly through 1992. The Hell is On the Way tour took them to Europe for the first time.

1993
Jawbreaker's third LP 24 Hour Revenge Therapy (Tupelo/Communion) was recorded in three days with Steve Albini. It was followed immediately by the When it Pain, It Roars national tour, by which time the band had found a way to make rent while enjoying relative obscurity. Jawbreaker ended the year opening a weeklong leg of Nirvana's InUtero tour.

1995
Jawbreaker signed to DGC and recorded Dear You with producer Rob Cavallo. (Green Day, Muffs, that dog.). The record was widely dismissed by both the mainstream press and many fans, who felt the band sold out.

1996
After two national tours and a trip to Australia, the band broke up, stating that the band had run its course. Blake formed Jets To Brazil after moving to Brooklyn. Chris played in a few bands and continued his graduate studies in history. Adam opened Lost Weekend Video in Sf's Mision District and played with J Church, the Moons and now Whysall Lane.

2004
Dear You had been enjoying a second coming in the punk rock/"emo" zeitgeist. Countless bands cited Jawbreaker as an influence and deemed Dear You an underrated classic. Adam Pfahler ended up licensing Dear You from Geffen and releasing it on Blackball.

Two Jawbreaker tribute albums followed, and the band continues to get named-checked and covered by the likes of Foo Fighters, AFI, Fall Out Boy, Jimmy Eat World, Lucero, Dashboard Confessional, Sparta, Lagwagon and shitloads of other diehard supporters.

2017
Don't Break Down: A Film About Jawbreaker released. The documentary was made by Keith Schieron and Tim Irwin, producers of the Minutemen documentary We Jam Econo. It screened nationally and in Europe.

24 hour Revenge Therapy was the subject of the 33 1/3 book series written by Ronen Givony and publshed by Bloomsbury Press.

Jawbreaker reunited in 2017 to play Riot Fest in Chicago, Illinois. It was the first time they had played in over 21 years. They headlined the closing day of the festival.

2018 -
Jawbreaker continues to tour and plans on recording another album.