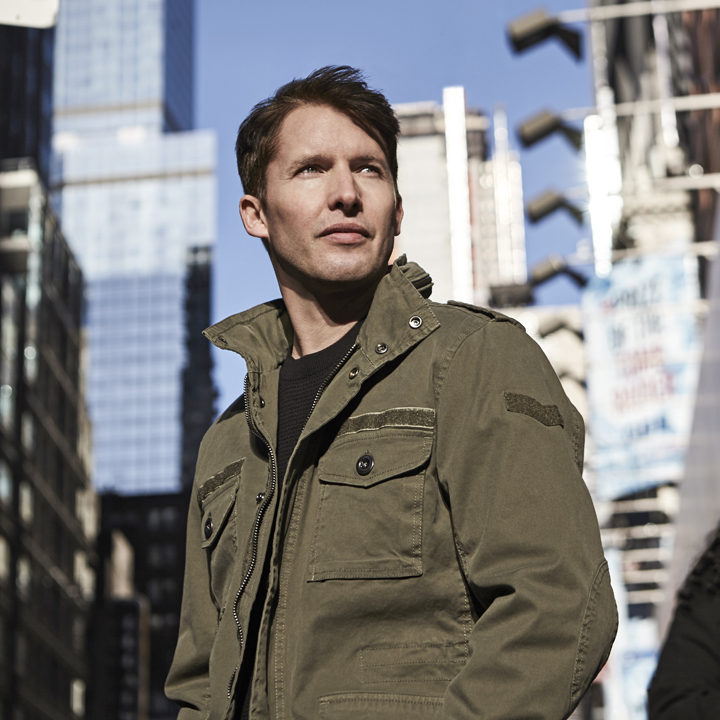 Prior to the global release of James Blunt's audacious new album, 'The Afterlove,' on March 24, 2017, the artist has a declaration to make.

"I'm shitting myself," Blunt confesses cheerfully, tucking into his lunch in a cosy West London pub. "I just don't know how this album is going to be received. All I know is that I love it, and it might be something that only I love, but I genuinely think this is one of my most exciting albums."

He stabs a sausage and chews thoughtfully before continuing.

"It feels very much like a fresh start for me. They say, 'If you don't change, you die.' Well, I'm on my fifth album -- I couldn't just do the same thing again. But I don't know how this is going to play out."

His trepidation is understandable. 'The Afterlove' is James Blunt, just not as we know him.

The familiar soft rock stylings have been replaced by subtle shades of electronica and a dark digital pulse. The album contains drums and bass that, as Blunt brilliantly puts it, "come out of a computer."

There are still acoustic guitars and yearning vocals aplenty only enhanced this time by an intriguing sonic strangeness.

"I would say it's the least organic album that I've produced," Blunt says.

"In previously talking about albums, I've always been, 'Oh, well, you know, it's influenced by Fleetwood Mac or Elton John,' and with this album, I feel like I haven't really got any of those things to say."

Blunt mops up some onion gravy and grins, he knows the songs are special.

The singer has created 10 snapshots from his extraordinary life wherein love, lust, mistakes and regrets are scrutinized unflinchingly. Such is their sense of intimacy, the listener almost feels as if they are eavesdropping.

"I've played a few of these songs to mates and lots of them have turned round, really excited, and said, 'This is great. We don't even have to pretend to you that we like it. We actually do!'"

Truth be told, everyone's got a bit of James Blunt in them.

After 15 years toiling at the coalface of sensitive song, Blunt has sold more than 20 million albums and as many singles. His debut collection 'Back To Bedlam' is the 17th best selling in the UK of all time.

"It doesn't make sense, does it?" Blunt puzzles. "It was such a long time ago, I almost can't relate to it anymore."

He feels similarly about his well-documented career in the British Army.

"That really does feel like another lifetime," he says of his previous incarnation as a captain in the Household Cavalry.

Now 42, happily married with a son, James Blunt is in a good place.

With 'The Afterlove' you suspect that he has truly found his voice.

"But it's taken its time, hasn't it?" he grumbles good-naturedly.

Call it fifth album syndrome but artists know themselves by album Number 5:

Bruce Springsteen 'The River'; Michael Jackson 'Off The Wall'; Simon & Garfunkel 'Bridge Over Troubled Water'; U2 'The Joshua Tree' -- all fifth albums.

For all its beguiling bleeps and ambitious backing vocals, the melodies on Blunt's fifth are undeniable.

The songs -- a disparate assortment of stories plucked randomly from Blunt's conscience -- and written with the finest songsmiths of the day, are strong.

Key co-writers on 'The Afterlove' were Ed Sheeran and Ryan Tedder of OneRepublic, who has written some of the biggest hits of the last decade with Beyonce, Adele and Taylor Swift.

Other collaborators included Amy Wadge ("Thinking Out Loud" -- Ed Sheeran, Shannon Saunders), Stephan Moccio (co-writer of "Wrecking Ball" for Miley Cyrus and "Earned It" with The Weeknd), MoZella (who has written with One Direction and Ellie Goulding) and award-winning English songwriter/producer Steve Robson.

Having clocked the writing credits, the music site Popjustice mused, "Imagine if James Blunt's new album turns out to be the best of 2017?"

Perhaps the most significant contribution to 'The Afterlove' was made by Ed Sheeran, when he visited for a songwriting session in Switzerland.

(Blunt lives in Ibiza but also has properties in Verbier and London, although he maintains that "my main home is the tour bus.")

"I taught Ed Sheeran how to ski and he taught me how to write songs," Blunt says humbly.

"I needed someone like him, who is very forthright, because knowing that people are going to hear it, and I'm a really private person, whereas I used to write very open songs, I've become more reclusive in the way I expose myself.

Like Sheeran, John Lennon was fond of saying, "Writing is easy: you sit down with your guitar and just open a vein."

In keeping with that credo, Blunt's blood is all over these tracks.

"I'm in a place where I'm not trying to hide anything," he says of the nakedly confessional songs on 'The Afterlove.' "It's very open and pretty truthful."

The emotional honesty hits home on "Make Me Better," written face-to-face with Sheeran, which starts as a simple love song to mother and child before breaking into in a delirious gallop of unbridled love that could crack the hardest heart.

Taking us right back to 1984, "Don't Give Me Those Eyes" is the album's centerpiece: an old school power ballad with a don't-go-there message and a teetering tower of skyscraping vocal harmonies.

"Someone Singing Along" addresses big problems with small brushstrokes and has proved to be curiously prophetic, as Blunt predicts, "Some people going to build a wall/Then smash it with a cannonball."

Conversely, "Paradise" is an ecstatic rush of joy. "Let love be the reason for breathing," Blunt croons in the cascading chorus, setting free his inner hippie.

Thematically, "Lose My Number" is in similar stalker territory to "You're Beautiful," but this SMS surveillance song comes ingeniously disguised as a left-field dance floor hit.

For the sad and defeated "Heartbeat," Blunt summons some achingly tender sentiments. "It's only luck that I was loved by you at all," he observes. Had Bob Dylan written that lyric, critics would be turning cartwheels. "It's the line that I meant the most, probably in the whole of the album," Blunt acknowledges. "I hope I've portrayed someone who doesn't have too much of an ego and, I hope, a sense of humility."

In his signature self-effacing style, Blunt heralded the arrival of 'The Afterlove' last year, tweeting, "If you thought 2016 was bad... I'm releasing an album in 2017."

"I went to a restaurant the other day in Switzerland that my friend's just bought and renovated," recalls Blunt, embarking upon a casual euro-anecdote. "The blackboard outside said, 'If you thought 2016 was bad, James Blunt's releasing an album in 2017.' They'd used my joke, and they hadn't even credited me."

'The Afterlove's reflective sense of self might suggest that Blunt's legendary fondness for a lively evening out has diminished.

"I've had my share of shallow nights," he admits in "Love Me Better." "Cos I was scared to get it right/So I was hanging with whoever."

Has Blunt, a man currently sipping an orange juice and lemonade, succumbed to the responsibility of fatherhood and hung up his party boots?

"No," he replies coolly. "I just start earlier in the evening."

On-tour revelry will doubtless ensue as Blunt hits the road in June guesting with Ed Sheeran in the States, and then takes 'The Afterlove' tour across Europe until the end of 2017.

"I think these will be tough songs to take on tour with my band because some of it's much more electronic,' he frets, adding jokingly. "It would be much cheaper if I could get rid of the band."

"One song is all you need," the "You're Beautiful" singer shrugs. "If anyone's ever said, 'Oh, you've only got this one hit,' it's normally the people who've had none."

"Actually I always enjoy playing 'You're Beautiful' live because I'm thinking, 'Awesome, it's almost the end of the concert. Nearly time for a beer.'"

Polishing off the last of his hearty pub repast, Blunt -- a deeply discreet man who gives very little away outside of his songs -- drops his guard for a moment and lets you in, as he attempts to define what 'The Afterlove' means to him.

"It's not even a word, is it, afterlove?" he laughs. "But it sums up so many different aspects of my career. And it's true to where I am in my emotional life."

"I've always been searching pretty hard, not quite knowing what I'm after, I haven't quite known what the end goal is, and then it falls in your lap and you think, 'Oh, it wasn't that hard after all.'"

Glad to have got that off his chest, he administers a mighty handshake, grabs his rucksack and heads for the door.

Safe to say, James Blunt is no longer shitting himself.