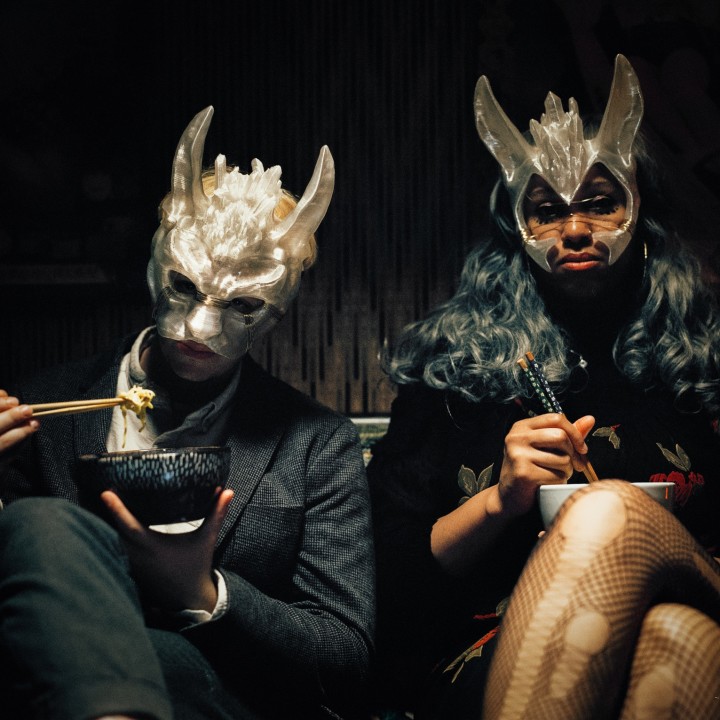 Jadu Heart are an enigmatic alternative-pop duo from London and Huddersfield: a purposefully best-kept-secret who, even behind their masks, have acquired the sort of hardcore global following (40 million+ streams, 500-capacity sold-out shows) that make them one of the most unique, intriguing new bands coming out of the UK.

Jadu Heart’s is also a world that arrives fully-formed before you even click play on the band’s debut album, Melt Away. It’s a record that follows their semi-fictional characters of Dina and Faro on the next chapter of their dizzyingly-detailed saga. Yet like the great concept albums they are drawn to – Ziggy Stardust, Sgt. Pepper…, Tommy – at its dark heart Melt Away is just as much about the modern British experience. Songs across the album variously tackle everything from morality, drug culture and youthful alienation to loneliness, friendship, and those qualities which make monsters (and lovers) of us all.

Having met whilst studying music, earth first got its taste of Jadu Heart’s inter-dimensional sound back in 2016. With an acclaimed run of singles and sold-out shows since then, the supernatural jump-off point to the Jadu Heart project has given Diva and Alex the freedom to explore more IRL qualities of themselves, and the world around them. It’s this tension between fantasy and reality, insider and outsider, that is embedded even in the album name itself, the pair say. “The name Melt Away came in 2017: we had been playing a show in Cologne and got stuck there for a few days due to complications with the tour van. Instead of moping around we decided to indulge in the city, and this idea of melting away into a surrounding just seemed to sum up our experience, and the experience we wanted people to have when listening to the album.”

As humans, Jadu Heart are a deeply positive span of paradoxical British culture - southerner/northerner, girl/boy, black/white, scientist/poet, city/country. At their shared home in Camden you’re as likely to find a dozen 3-D printed masks or a totem pole made by Alex’s sculptor parents as you are a fantasy painting from a homeless friend of Diva’s artist father - all of which combine to build their unique musical universe. Yet the narrative of Melt Away itself arguably closes the gap slightly between characters and creators. The pair’s alter-egos first came to light in a world not unlike Earth (on the planet of Koshui, to be precise), when they found an abandoned temple deep inside a lush green forest. Here, they came across a golden MPC, which – upon being touched – transformed them into monsters: cursed, clawed, with black feathers and crystal faces. On Melt Away, these characters are banished to London, and what you hear is the highs and lows of growing up reflected in the characters as much as Diva and Alex themselves.

Dark, dreamy and immersive, Jadu Heart’s sound takes classic tropes (tripped-out psychedelia, introspective electronica, alternative folk and soul) and yields results which feel as suited to fans of Jai Paul and Radiohead as they do Tame Impala or sometime-collaborator Mura Masa. It’s an enveloping world that the band has honed alongside Guy Sigsworth (Bjork, Robyn, Imogen Heap), with whom they co-produced Melt Away. “Working with Guy was a really amazing experience: we learnt a lot about ourselves. Guy is known for having a very clean sound and we have always been into more lo-fi, slightly dusty-sounding music, so it was a bit of a struggle for him having us keep asking him to essentially make his mixes worse. But we got the right balance in the end, and it’s been incredible having him part of this journey.”

Those blurred lines between autobiography and myth – a band like Jadu Heart suggest one is as honest as the other – connect the lyrical threads of Melt Away. Beneath its swirling production and hauntingly melancholic vocals, for instance, ‘Forgotten Ghosts’ is at its core a deeply personal song “about remembering people who meant so much in your past, but have since become faded in your life.” ‘Purity’, too, is in fact “about the conflicts that arise between two people as they become closer. The dark side of love, intense and devastating at its low points, and only becoming more beautiful and sacred as you push through.” The duo’s desire to push themselves and keep experimenting is again apparent in moments like ‘Wanderlife’, which emerged after “we’d gone on a four day David Bowie bender. We wanted it to be big and dramatic like an old school rock ballad because, well, who makes rock ballads these days?”

What’s emerged on Melt Away is a fantastical album that explores those most raw human moments: the insecurities, fear, ugliness and beauty. And it’s remarkable to see a world as fleshed out and intensely detailed as Jadu Heart’s. The vinyl edition of the album, for instance, arrives alongside a comic book drawn by Whitsteen, a Canadian artist who Diva found on Instagram and now illustrates the story behind the record. The artwork, too, has a story to tell: the band met a homeless man when writing the record who was painting surreal and impressive work on cardboard, so decided to buy him paints and canvas to work from Diva’s Dad’s house. “We would spend the days writing and he would be in the kitchen painting away listing to the music. He kindly let us use some of his work for the covers, and now he’s just built up to his first show in Paris next month: it’s amazing to see a war veteran who’s been cast onto the street discover art at the age of 50, and through it find new life in expression.”

Jadu Heart’s debut album closes on ‘Koora (Melt Away)’, with a spoken coda as to the fate of Dina and Faro read by Kamalli Thomas. “Passing Kadu trees, they came to a river. Seeing their warped faces in the river bed confused the children. Why had they become so fierce and ugly? They wondered through the plane, demonised and lost. Melt Away.” It’s a similar journey of reflection, reinvention and self-discovery that Diva and Alex have undertaken whilst making their debut album: with songs that are simultaneously intimate and cinematic, the lens of storytelling and disguise has finally allowed this strange but beautiful duo to truly be themselves. Claws and all.