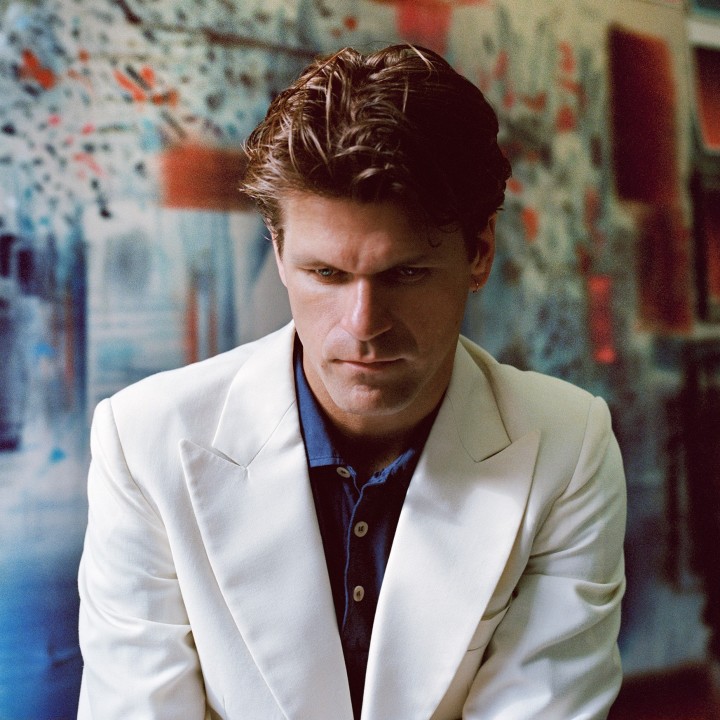 There is an allegory of an artist, who was commissioned by a collector to draw a chicken. They agreed on a price, and arranged to meet two years later, when the drawing would be done. The day came, and the pair met. The artist took out a piece of paper and a pen and in ten seconds, drew a chicken. The collector was shocked! You can’t draw a chicken in ten seconds, he said. “Yes,” said the artist, “But you didn’t witness all the other years I spent drawing chickens, so that I could draw your chicken in ten seconds.”

Prayer, the opening track on Jack Peñate’s After You, was written in twenty minutes in his studio, at the time located in a converted garage in Oxford. But it took him ten years to be able to write a song in that twenty minutes. “I got lost, trying to be what I’m not,” he sings in the opening line. It is more than a metaphorical use of language.

The journey to After You was not a straight forward one. Ten years ago, as he finished touring his second album Everything is New, the south London-born songwriter, best known for his hit "Torn On The Platform", walked off stage, got home and realised that he was physically unable to record another album. All he owned in the way of equipment was a small recording setup and the instruments accumulated while touring. Having spent almost a year sitting in a studio with Paul Epworth, Peñate was made aware that there was so much for him to learn to become self-sufficient in production skill. He felt he was unable to fluently speak the language of his art form. “I wanted to be able to walk into any studio and be able to express what I wanted to achieve using the language for the technical aspects,” he says. Something clicked inside him. He knew that if he wanted to achieve longevity as an artist, he had to be able to control the audio narrative of his work.

Many of his influences were writer-producers: Todd Rungren, Shuggie Otis, Arthur Russell and at 27, he knew it wasn’t too late to learn. He found a windowless and disused boiler room in East London and spent a month painting it then filling it with his instruments while borrowing what he could to create a rudimental studio. This was the start of the learning process and he spent his time working out how to make the sound of a feeling. How do you make the emotion that you are trying to convey, as much as it can be said, with sound, lyrics and chord progressions? But the question that he wanted answering was bigger than just instruments. “I got so lost doing it on my own,” he admits.

The studio became the genesis of a big moment in music. Label-mates Sampha, SBTRKT and The xx worked there, as did Wild Beasts and other friends and artists who dropped by the open house studio. Although he had set the canvas for a handful of other artists, he decided not to enjoy the fruits of his labour. “I played a show with The xx in New York and just didn’t come home.”

Where the studio had been social, New York allowed Jack to strip himself back to his original place of creativity. Growing up he was insular, writing songs in his bedroom with just a guitar and a four-track. In New York he moved around, always finding apartments with pianos in them, diving into a loneliness that encouraged him to find a creative sweet spot. Once back in London he bought a flat, and continued to be alone, turning it into a tiny studio. A few of the songs written here have made it onto After You - in a new iteration at least.

Throughout his ten-year musical journey, Peñate ensured that he always had one constant: a studio. Over the decade, he’d use it to write well over a thousand songs. “I wanted to be self sufficient and I wanted to be respected,” he says. “Throughout the process, being respected as an artist was the goal. You can’t question someone if they have an ability to produce and write an album themselves.” But that kind of respect must come from within, from having the knowledge he could walk into any studio in the world and be able to express what he wanted to do.

When he walked off stage in 2009, he felt as if he had nothing left to say. But After You is rich with emotion, on top of an extra layer of sonic depth. “I didn’t want to make a record that was just words,” he says. After indulging in mind-expanding ritual, studying writer’s and poets like Hesse, Rilke and Huxley alike, and looking to mysticism and mythology for answers, he learned to find a new voice. “I started to play with sounds that evoked feelings, and then write a song over that. 'Swept to the Sky', the last track on the album, was written because there was a sound that reminded me of a feeling I had while being in the jungle in Peru.” The result is a semi-religious experience, with the potency of Peñate’s lyrics lingering over every increasing sonic layer.

It’s easy to lose your path, to paraphrase Prayer, and Peñate took the decision not to release anything, or show anyone anything until he felt one hundred percent certain of every element of every song. This no-niggle policy paid off. Paul Epworth introduced him to Inflo, a spiritually leaning, intuitive producer, who will work when the feeling is right. “The day we met, he was feeling it. We got in my car and went to Oxford, to my studio. He played two notes and I sung, “I got lost, trying to be what I’m not.” It is both a wonderful line, and a truthful one.

"Prayer", the first single from the album, features Peñate playing several instruments, as well as the production credit he set out to achieve. It carries more than a nod to gospel, all set around a glorious pop hook, played on a Farfisa organ. Its musical and lyrical complexities belies the fact it was written in twenty minutes. “Once we had written it, all the pieces of the past ten years fell into place. It was like a puzzle coming together.”

Former Spankrock member turned producer and jazz drummer, Alex Epton came on board and set to bring together 10 years worth of work into a cohesive album in XL’s New York studio, adding in additional programming and production as well as drums and percussion. Paul Epworth, with whom he created Everything Is New, came back in and worked on several tracks.

The album doesn’t just draw on his musical journey of the past ten years, it brings in influences from the music he heard as a child. "Loaded Gun" has a prechorus that Lennon and McCartney would have liked to have written. As a child his brother would play him Jungle music. There’s elements of that too. His dad ran acid house raves – that’s in there. But perhaps, the most poignant track is "Gemini". With nothing more than piano, vibraphone and drum beat, the words of Peñate’s grandfather, the writer and artist Mervyn Peake, are read by his uncle Fabian. And it’s not the only family tie. The artwork for the album, and the first video, has been done by Peñate’s cousin, the acclaimed artist, Eddie Peake. “We both grew up with an uncanny focus on what we wanted to do, but had never worked together,” says Jack. His work is both incredibly joyous and melancholy, and it does something to me that music does to me too.”