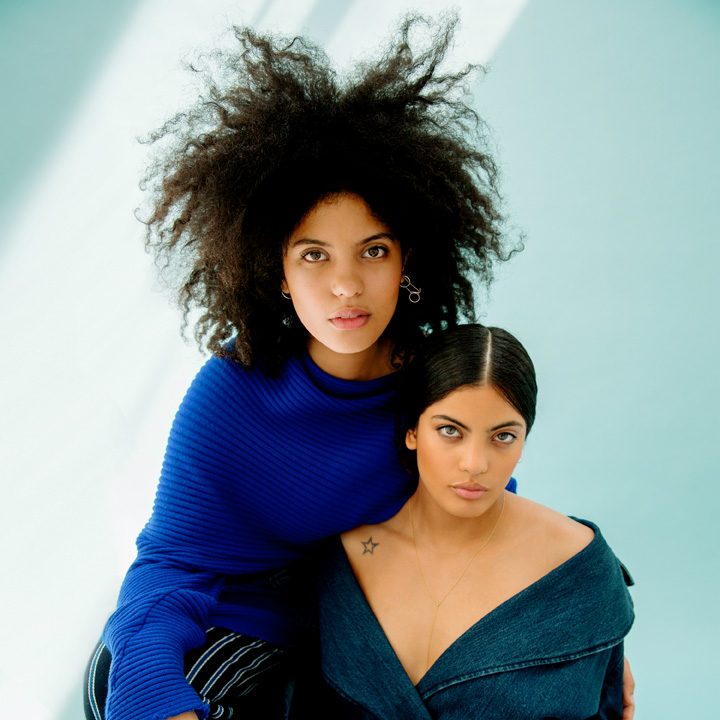 Ibeyi is 22-year-old French-Cuban twins Lisa-Kaindé and Naomi Diaz. Since the release of their critically- acclaimed, self-titled debut album in February 2015, Ibeyi have been captivating audiences across the globe with their unique blend of modern pop, hip-hop and electronic influenced with the traditional sounds of Yorùbá. On September 29th, Ibeyi will release their sophomore album Ash via XL Recordings. Their first album, the eponymous Ibeyi, grappled with the past—the sister’s relationship, origins, loss, and roots. It earned them fans and collaborators in some of the most iconic and crucial artists of today, Beyoncé and Alvin Ailey included. By contrast, Ash is a more visceral and potent political statement, and while firmly rooted in Afro-Cuban culture and history, finds itself entirely concerned with Ibeyi’s present: Who Lisa-Kaindé and Naomi are, what’s important to them, and how they live today, especially given that the spheres, both personally and politically, are entirely different from when Ibeyi was recorded. It’s also a testament to their cathartic live performances, where they’re able to transmute a vast array of emotions— sorrow, anger, sensuality, happiness—to and through their fans.

Ashes typically have a funereal connotation, and suggest a sense of crumbling. And it’s true that the twin sisters of the electronic-soul duo Ibeyi, Lisa-Kaindé and Naomi Díaz, wrote the first song for their album Ash, also entitled “Ash,” during the American elections in November 2016. Despite the heaviness in the air, Ibeyi sought to write a song that plucked positivity from the very place where all hope seemed to be lost, which, in turn, became an underlying theme for the album as a whole. “We can do positive things with ashes,” Naomi says. “Ashes can fertilize,” Lisa-Kaindé adds. “There’s still hope.”

Ibeyi worked once again alongside XL Recordings head Richard Russell, a confidante and friend, to produce Ash at his studio. Along with Russell’s stylized production sensibilities, Ibeyi drew from a host of influences ranging from Kendrick Lamar, Jay Electronica, Meshell Ndegeocello, Erykah Badu and Nina Simone and beyond, to craft the wide-ranging musical landscape of Ash. Yet visual art also played a pivotal role here, with the sisters particularly drawing inspiration from video artist Chris Cunningham for a track on the album. Meanwhile, the sisters have never shied away from writing lyrics that reflect the depth of their shared heritage, and include songs written in English, French and Yoruban. Yet Ash also brings with it the first song the two have written that includes Spanish lyrics. “This album was born because of feelings we had in our bellies, whether it’s energy that wants to get out, fear, love, anger, joy and hope,” Lisa-Kaindé says. “All the songs and the subjects that we’re talking about on this album, we’ve actually been carrying them for years. It's a part of us”

Instrumentally, Ash finds Naomi refining her skills at the cajón and the batá, and Lisa on the piano, and expands the use of electronics, as well. It’s the idea of transmission, though, that lies at Ash’s core. “I think it’s one of the most important words that I know!” Lisa-Kaindé explains. “I wanted to be a music teacher when I was younger. So transmission has always been important for me. I feel like I was also raised by strong, independent women and I think they transmitted that to me. I think that also artists saved my life through their art; that they transmitted to me. I feel like the most important thing you can do is transmit to people your truth and your energy and what you feel and how you feel when you’re a musician.” While Ash is an imprint of the sisters’ lives at this particular moment, it’s also reflective of a lifetime of reckoning, particularly with injustices not limited to the systematic oppression of police violence and racism.

To celebrate the release of Ash, Ibeyi will set out on a global tour in 2017. Ibeyi’s live performance is mesmerizing and not to be missed and as Los Angeles’ KCRW explained, “there is a remarkable power to what they do.” Meanwhile Noisey noted, "It’s tough to tear your eyes from the live performance," in describing the unique live experience of Ibeyi and the OC Weekly raved of Ibeyi’s show saying it is, “an immersion; it was passionate, and pure and gripping in all the ways you never expect music to be anymore.”

So this year, step out of the gloom and into Ibeyi’s world, a place of optimism, openness and acceptance. The modern world never looked so beautiful as it does through Ibeyi’s lens.