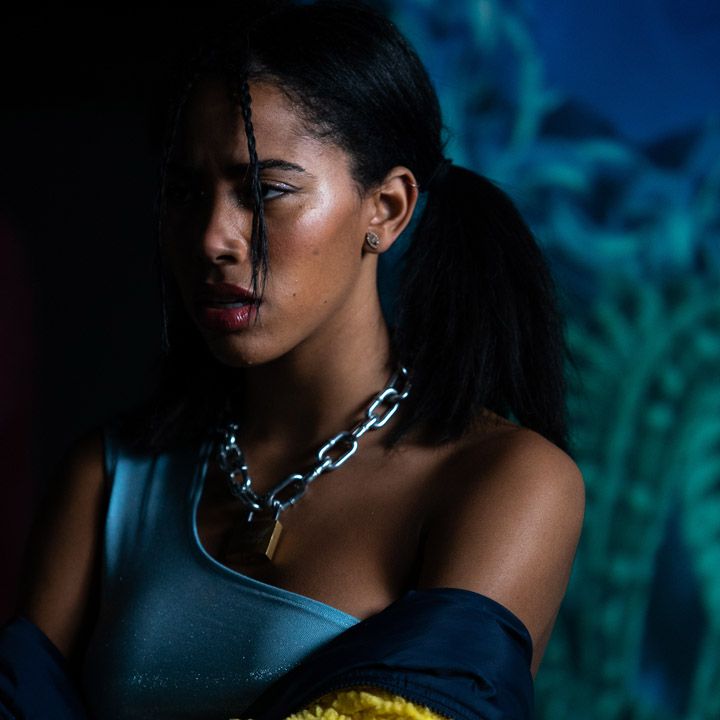 As 21-year-old Herizen sits outdoors at a cafe in her locale of LA, a beetle flies around her. She tempts it nearer. “Hey guy, how's it going?” she says. The beetle lands in her hair, and stays there for the remainder. Herizen never knows what's around the bend but there's an openness to her that holds some kind of unspoken charm. It's in the way she speaks; slow and searching. It's in the way she writes music; as a stream-of-consciousness that defies genre pigeon-holing. It's in the way she lives; exploring opportunities, cities, people with the strongest sense of her own conviction. She believes in magic. But not card tricks, or tarot readings. “I like real magic,” she says. “Earth, crystals, manifestation. The magic that comes from inside. That's what I've lived by. That's what I revolve around.”

Over the past two years, Herizen has been living in Eugene in Oregon, waking up led by her own curiosity, avoiding her phone or social media, and going wherever the forest takes her. It's there that she's been writing her first EP, aptly titled 'Come Over To My House', which goes some way to explaining the travelling, explorative, multi-genre dynamism of her songs. Her R&B lilt is dripping in wonky synths, exotic percussion and jaunty rhythms. It truly does sound mystical. Herizen draws her daily spirituality from the stones and crystals she collects. “They centre a certain chakra,” she says. “I put it on my heart, my stomach or my womb space and I feel it. It's not bullshit. The human spirit holds all the magic.”

Herizen's Eugene years have been very small town style. It's a double life, though. You may already know Herizen's face. Since 2015 she's played lead character Mylene in Netflix series The Get Down, directed by Baz Luhrman. It was an opportunity she just couldn't turn down. “I got to sing on the show and I knew my music would thrive after that,” she says. “There's no way it wasn't going to help my music career so I made a sacrifice and it took two years. During the filming, Herizen moved to New York City. She was 18, new to the city, missing her family, and having an identity crisis. “I was depressed,” she admits. She was grateful for it though, and it's provided her with a real grit that's seeped into her songwriting.

The growth spurt was even more discombobulating due to Herizen's unique upbringing. She was raised in Miami by a Buddhist spiritual leader mother, and a Rastafarian father. They homeschooled Herizen and her two younger sisters. “It was very special,” she says. “My parents found the rootsy parts of Miami. Following in her father's songwriting and performance footsteps was complex, particularly given the purity he imposed upon her. As a tomboy, Herizen wanted to impress him, hence doing every sport under the sun and learning how to play guitar. But she was sheltered and only allowed to listen to prescribed cassettes: classic rock like Pink Floyd, The Beatles and Van Halen. Ozzy Osbourne was where the line was drawn. “I wasn't allowed to do anything that wasn't pure of heart and mind,” she explains. “My mom freed me. She gave me an iPod shuffle for my 14th birthday. I was listening to hardcore screamo. My Chemical Romance was my life.” In that violent,  tortured music she found other elements of her personality, a duality almost. “I'm a fairy girl but I have a pixie side,” she says. “Pixies are mischievous and vindictive. I have an alter ego that's demented and dark. My music translates through that.”

Hence a debut EP that flits between light and dark. Herizen calls her alter ego 'The Creature'. “ love her. She's who I am when I'm out and I'm shielding myself from the bullshit,” she explains. “When I'm light and bubbly I let everyone in. When I become Creature I shield it all and I'm super introverted.” This dichotomy within her began to present itself when Herizen started integrating with society. Her mom worried about her adjusting to the world and would put her in schools for stints.

Currently based in LA, Herizen first came to the city to go to High School in Santa Monica. Herizen, however, was very naïve. Eventually she fell in love, and hard. She was 19. “It was really beautiful and crazy. I was a person and I knew who I was, so I could hold onto myself in the relationship. It was long distance. I hated him and I loved him.” Her ex produced two of the EP's tracks: Fragile Mind and Get High. “They're about him. The rest are heartbreaks and happy memories.”

Most of the EP was written in Oregon and then recorded in LA with producer Absofacto. Herizen connected immediately with him. He got her process, which is largely writing stream-of-consciousness. A lot of the vocals on the EP are original takes. “He doesn't try to give his two cents unless I ask,” she says. “He lets me smoke my weed and doesn't put a time pressure on me.” Herizen doesn't respond well to LA types who just want to make a hit record. “That makes me wanna go home,” she says. In their first session they wrote Do What You Want To. “It's the most joyous song I've ever written; all my emotions of heartbreak and newness and love for myself,” she explains. Again, it was done on the spot. “Music isn't to be thought about. It's to be done.”

For the past year, Herizen's enjoyed a humble lifestyle, living in central Hollywood. Her first single Social Jungle is a response to her generation's pre-fascination with social media. Herizen's experience with overnight Instagram fame has given her a powerful perspective on the negative effects. She never asked for it. “It made me upset,” she says of her popularity. “I should have been more grateful but I was annoyed. I couldn't deal with it. Everyone in New York suddenly knew who I was. I was on the subway getting harassed. Social media is the biggest issue in the world. It's changed everything; it's changed people, it's changed every girl who has followers, it's made everyone crazy. I disagree with it.”

Her relationship with it grew so toxic that she threw her phone away at one point. Now she just posts what she wants, likening it to a journal. “When I post it's for me, it's my art. I share what I wanna share and I don't hold back. I posted a picture of me with long armpit hair and lost 5,000 followers. I was like, Bye! I try not to get into my ego too much because it's a disease.” That authenticity is priceless to her. It's something she shares with one of her biggest inspirations: Ed Sheeran. “His music sounds like his heart,” she says. “I want my music to sound like my heart.”

In her element, exploring everything young adulthood has to offer, Herizen's music is an exercise in boldness. When she wrote the song Paradise she realised that she wants to use her platform to bring everyone to her wavelength. “I want everyone to smile and hug and relax. I want you to dance, listen to the lyrics and feel it.”