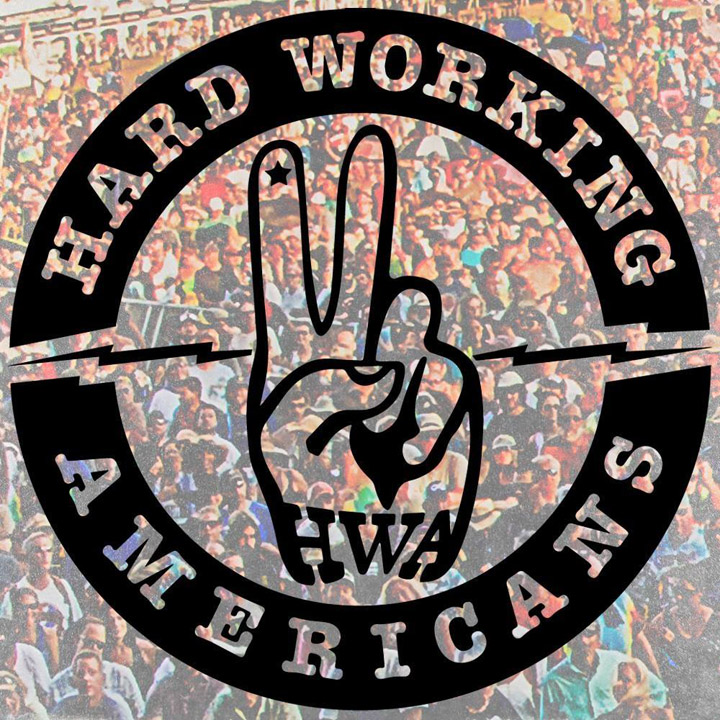 In the course of popular music history, the breakthrough albums for several legendary artists were live recordings, most famously At Fillmore East by The Allman Brothers Band, Frampton Comes Alive by Peter Frampton, and Alive by KISS. Now four decades later, history seems poised to repeat itself with the release of We're All In This Together, the powerful, new live album by Hard Working Americans.

Four of the songs on the record appeared on the band's eponymous debut, while five are from Rest In Chaos. Two of the tracks are reworked versions of songs from Snider's solo album, Peace Queer, which the band perform regularly, and there also is the aforementioned Chuck Berry cover. In addition, the album includes one brand new number, the title track, which grew out of one of Snider's spoken word bits on which he transforms into some sort of rock & roll evangelist while the band vamps behind him.

"Todd puts a whole lot of thought into what we call the invocations, two of which are on the record," Schools says. "One is the sort of introduction to 'Stomp and Holler,' and the other one, we call 'We're All In This Together.' We decided to make it into a whole song because he really worked hard on that story."

Snider's story that became the album's title track is a metaphorical tale of how he and the band found one another, as well as an expression of the band's philosophy of inclusion. "The moral of the story is Todd being lost at sea, and this band coming together behind him and teaching him we're all in this together and that we're stronger together," Schools continues. "I think that message resonates really loudly in this day and age, where people are so divided. The whole reason of Hard Working Americans, and everything we've discovered as a band, is that we're stronger together.

Hard Working Americans has always been a mission as much as a band. Loose-limbed, freak flag waving specters caper inside this quicksilver evolving unit where the boogie politics of Haight-Ashbury canoodle with southern muscle, blue-collar understanding, and a bold rallying cry for true American individualism, freedom and community.

The group's self-titled debut was released January 2014 and featured 11 inspired, timely compositions by standout but often overlooked composers like Will Kimbrough, Kevn Kinney, The Bottle Rockets, and more. In the beginning, HWA's mission was shining a light on the folks that get missed in the modern shuffle.

The process accelerated once they took this bohemian revival on the road, something happily evident on the band's concert film and live album The First Waltz. Directed by Justin Kreutzmann, the film offers an insightful, copacetic-minded snapshot of the band's first chapter. But the title The First Waltz is telling. As anyone who's seen HWA live, the longer this project percolates the more they discover "gears we didn't know we could use," as Neal Casal observed after a late night festival barn burner.

In 2016, the band proved its mettle with original material, releasing Rest In Chaos, and touring the 13-track collection Dave Marsh called "one of the most well-sustained albums I've heard in years." "The transition to original music has been really easy because of how well and how quickly this band has gelled," says Dave Schools. "We finished the first tour and went directly into the studio in Chicago in the dead of winter, which was great because we were trapped in there [laughs]! It's this sort of psych-rock, riff-rock, garage-y sounding thing with hints of Americana song forms."

The clear flow and friendship in Hard Working Americans is easy to see, and the gravity of what they're doing develops a stronger, more irresistible pull the longer they serve this mission.

Hard Working Americans has detailed an upcoming Fall Tour in support of its newly released LP We're All In This Together. The band will return to the road for a newly announced batch of concerts between September and November.

In June of 2017, Hard Working Americans returned to the studio to finish tracking its 3rd studio effort. Recorded at Cash Cabin in Hendersonville, TN, where Johnny Cash cut some of his last works, the album will include songs Todd Snider worked on over the winter at his house by the lake, plus a never-before-published poem by Johnny Cash, set to music for the first time. The new record will follow the live album in early 2018, and the band is already writing new songs for its next release.