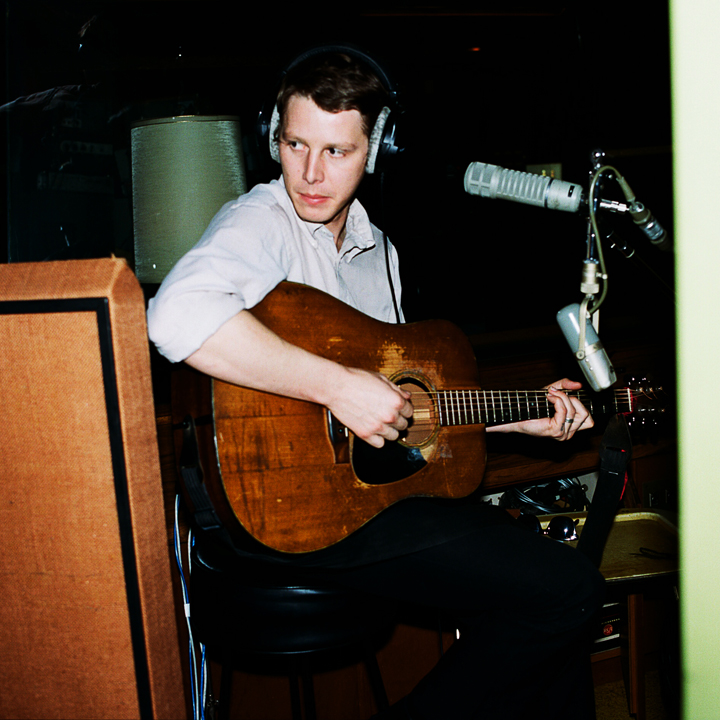 Uppers and Downers out September 7, 2018 via Autumn Tone Records

There is a wall stacked with amps where there might be a TV or a dining table in Marlon Rabenreither's living room. The bookcases contain a library of music autobiographies and historic tomes, alongside reams of old vinyl records. The set-up could be from the '60s, ‘70s, or '80s, but the year is 2018 and when recording as Gold Star, the Austria-born and LA-bred Rabenreither makes music that’s similarly timeless  and unable to pin to one context.

Formerly of The Sister Ruby Band, Rabenreither began his solo project in 2013 and is readying the release of his third album,Uppers And Downers. “What artists do is reactionary to what they did before,” he reasons. “I wanted to do the opposite of my previous LP, Big Blue, and make this record a collection of songs.” Hence the title, which isn't a strictly literal reference to different mental states, or even medication, but rather to the diversity of song styles.“The idea was to achieve a deeper scope, a more dynamic range: slow songs, fast songs, less genre specific, capturing all the moods.”

Indeed, Uppers And Downers is a collage that winks at classic eras, but with a modern bite and twist. It starts with the searching drawl and sadness of “Crooked Teeth,” while on “Baby Face” Rabenreither channels a more modern jauntiness. “This Is The Year,” on the other hand, is a freewheeling rock number that could’ve been masterminded in the late ‘90s, and features Cameron Avery of Tame Impala on piano.

The process began at LA's historic Valentine Studios, a space recently renovated by Rabenreither's producer friend Nicolas Jodoin (who had collaborated with him on his 2012 debut LP). Valentine hadn't been touched for decades but captured some of the greatest artists ever, including The Beach Boys, Frank Zappa, and Jackson Browne. (It's most recently famous for being where Paul Thomas Anderson filmed Haim in 2017). Jodoin was key in ensuring the songs formed a seamless soundtrack via lush arrangements and vintage-sounding keys and chords. For Rabenreither, it was an experience unlike any he'd had before.“It was the first time making my own work in a large, professional environment,” he says. “Old studios are these rare sacred spaces, like churches. It forces you to meet these expectations that you wouldn't push yourself to under less pressure. Time is valued there, and you know the people who were in there before did it right, so what are you doing?”

He went in with 25 song ideas but left the door open to further inspiration, responding to the grandiose environs when the moment served him. “Songwriting is like setting the dinner table,” Rabenreither explains. “You never know when the guests are gonna show up. A large part of my songwriting is staying out of my own way and not overthinking it.” The oldest ideas are from four years ago; the newest from four months. They usually stem from conversations with friends, everyday chatter.

While cagey about the songs' meanings, Rabenreither does allude to the notion that they span both the deeply personal and the observational. “The record talks about drug use and stuff but to me it's about the highs and lows of life,” he says. On “Half The Time” – the album's most autobiographical tune – he makes a remark about “kicking the junk,” which he admits is a literal reference, but it’s also about growing up in LA, a city that's constantly changing and has a deep-rooted underbelly despite its outward beauty. “I don't intend to romanticize sorrow or depression,” he says. “Why would anyone do that?” On "Where I’ll Be,’” he expresses guilt about making music a lifestyle choice, conscious of the judgments of others. “These people tell you who you should and shouldn't be working with and none of that has to do with art. Music can be a sacred thing. All the other stuff is mysterious. You feel guilty because you're selling a product. It's weird, right?” he laughs.

The one thing connecting the songs is Los Angeles, which remains his home. Now residing in MacArthur Park, Rabenreither feels the wave of excitement following the mass exodus of creative types from the more expensively priced San Francisco and New York City. His friends are similarly minded musicians and artists; they all believe in the everlasting power of rock'n'roll. For once in his life, he's starting to feel less like a lone wolf, more part of a collective movement. Uppers And Downers contains many vignettes of the city's neighborhoods, almost like a notebook of everyday images set to classic tunes. References to St. Andrews Square and The Marquis (“Beneath The Wheels”), Echo Park (“Half The Time”), and “Chinatown” give the album a roaming feel. The latter features Cole Alexander and Zumi Rosow of Black Lips, and is “written from a ghost's perspective about a friend of mine that passed,” he offers. “The idea that there's this presence after death.” Approaching his late twenties, Rabenreither's thoughts have become heavier and more searching.

Of the future, he notes that he doesn't feel like the finished article. “It doesn't matter if you've written a hundred songs, there's still so much to learn.” For Gold Star, the education is a lifelong endeavor. “It's like being blindfolded,” Rabenreither says of walking his path. “A lot of it is just working in the dark. You just try to evolve and be honest. I can justify writing from a small personal perspective. Any kind of simple small gesture is radical. When everything is about consumption and violence, if you can do something that is just sincere and well intentioned then that's something, at least.”