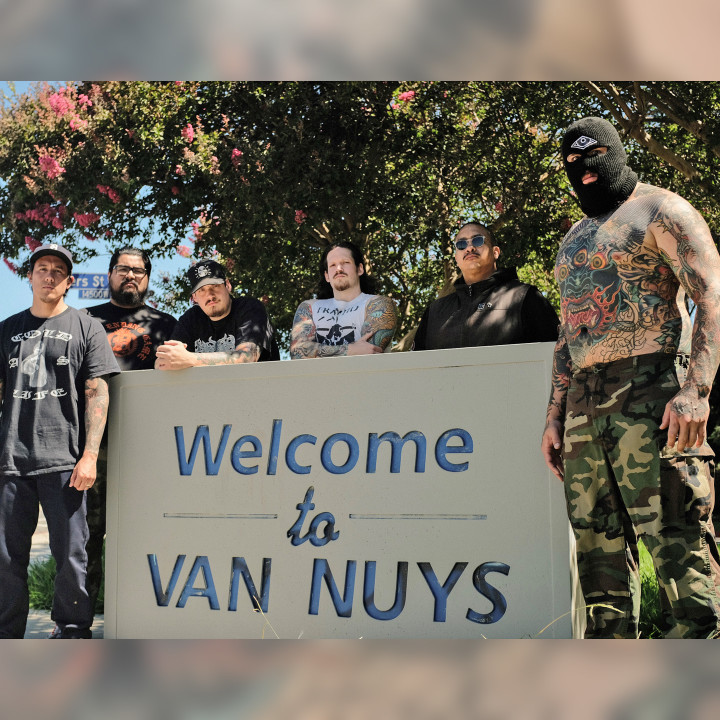 That's the driving ethos behind God's Hate, one of the hardest hardcore bands in the land. Co-founded by Colin Young of Twitching Tongues and vocalist/Ring Of Honor professional wrestler Brody King, God's Hate set out to re-establish the mantle of hardness created by East Coast HC titans Merauder, Hatebreed and the seminal Troy-core scene of the late 80s and early 90s.

"My biggest pet peeve in hard music is when a band is afraid to go all the way musically," Colin says. "Don't be a hard band with no hard parts. And you gotta ask yourself why before writing every single song: Why does this song exist? What am I trying to say and what am I trying to do? If it doesn't evoke some kind of emotion, what's the point?"

God's Hate answered that question with a fist to the throat on the Divine Injustice and Father Inferior seven-inches in 2014 and 2015, respectively, before sawing off their full-length debut, Mass Murder, in 2016. Railing against religion, the government and airing their grievances against the stupidity of mankind, they employed the strong-arm musical tactics of their forefathers: Beatdown riffs, slamming breakdowns, gang vocals and no bullshit whatsoever.

Fast-forward to right about now, and it's been five years since the last God's Hate album. During that time, Colin has been touring on and off with Twitching Tongues and King's pro wrestling career has taken off. There have been births, deaths and major life changes. Factor in the Covid-19 pandemic, and maybe the delay doesn't seem quite so long.

"Some bands write a record every year, which is crazy," Colin observes. "Other bands write albums with 12 or 13 songs, but you can tell they put everything into five or six of those songs. My goal was to write an album full of songs that could be my favorite song. And yeah -- this would've been out a lot sooner had Covid not happened, but I'm sure that's the story for every band on the planet right now."

Which brings us to God's Hate, the band's new self-titled album. Tracked at The Pit in Van Nuys, CA, by Colin's brother Taylor Young (Twitching Tongues, Zous) between August 2019 and the summer of 2020, the record marks a significant lineup shift for God's Hate. This time, Colin, King and guitarist Anthonie Gonzalez are joined by Twitching Tongues bassist Alec Faber, Taylor Young on lead guitar and third guitarist Martin Stewart. As if that weren't enough, Colin moved over to drums.

"Colin has always written the drums for God's Hate, so him moving to drums was kind of a natural thing," King says. "He tried to fight it because he wanted to be a guitar player, but I think no one can play the drums on this record like he can."

While the music for Mass Murder was co-written by Colin and former guitarist Leo Orozco, Colin wrote the music for God's Hate by himself, just as he had on the band's first seven-inch. "Having another person who is so skilled at guitar made the writing process for the last one a lot faster," Colin explains. "With this one it was like, 'Shit, I gotta do this by myself again.' So there was some fear going into it, but then it was the challenge that I didn't know I'd been looking for. I've never personally worked harder on any piece of music, and I hope that shows."

The lyrics on God's Hate are the result of a team effort. Taylor wrote the words for "Violence Unlimited" and "War Man" while the rest were born of a collaboration between Colin and King. "Brody will tell me what he wants to say, and I'll help him fine-tune that," Colin says. "The result will be this amalgamation of the angriest, darkest depths of our minds."

"What we wanted to do with this record was to strip it down to the bare bones of what got God's Hate started, which is just to be the heaviest hardcore band we could be," King adds. "The idea was to take our time with every song and make each one the most important song on the record. And the finished produced is ten songs of what we consider our best material."

Even a cursory listen to the pre-release crusher "Be Harder" will validate King's statement. Inspired by the quote at the top of this document -- which was related to Colin and King by Twitching Tongues (and former Hatebreed) guitarist Sean Martin -- it's a call to arms. "It's saying get off your ass and do something about your life if you don't like it," Colin says. "Life is hard for most people, but the ones who thrive are the ones who find a way to overcome that."

In the fine tradition of Sabbath, Maiden and Carnivore, God's Hate's eponymous album will feature an eponymous track. "Seeing that in my car -- 'God's Hate' three times in a row for band, album and song title -- was my dream come true," Colin says with a laugh. "Most of the songs on the album are personal, but this one hyper-focuses the anti-religious theme we've used in the past. Stating that the church is a business first and foremost, and selling the idea of God to weak-minded or vulnerable people is one of mankind's more evil endeavors."

One of the most personal songs on the album is "Eternity Of Hate." "It's probably the most personal song I'll ever write," King offers. "It's basically about my struggles with anger issues and lashing out at the wrong people and trying to raise my son to not have those same problems. There's a line in it that says, 'Iron sharpens iron, I will be your stone.' I need to make him a better version of myself through my past struggles."

In the end, God's Hate is everything the band wanted it to be. "God's Hate was a band born out of friendship and pure love for hardcore music and the desire to provide what we wanted to hear and felt was missing: Unapologetically hard music that holds nothing back musically or lyrically," Colin says. "There's absolutely no room for bullshit, especially in the world we live in now. This record was straight-up therapy for us, and I hope it inspires some people to do the same thing: Create painful, hateful music out of love."