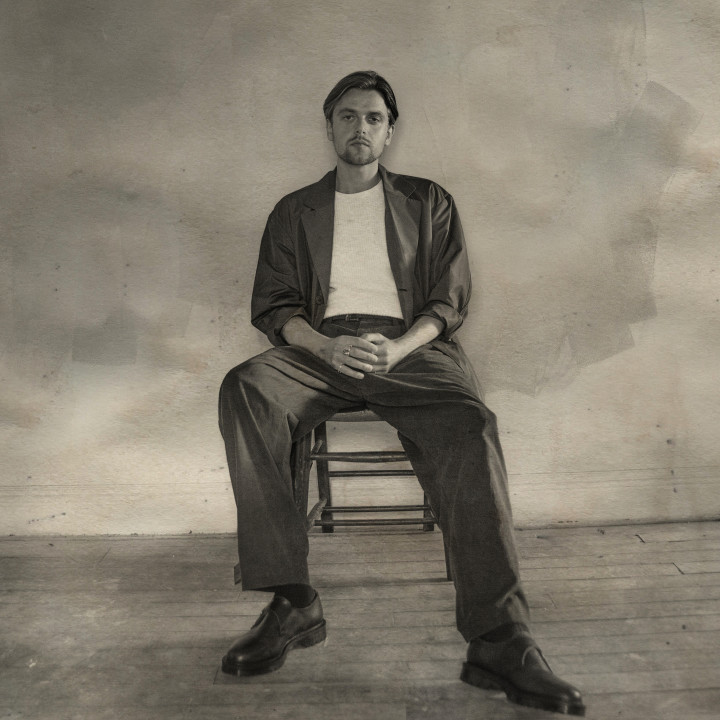 When George Cosby embarked on the intricate process of fashioning his debut album, he scripted himself a manifesto, some dreams to direct his masterful, timeless tunes toward. Four bullet points were earmarked at the start of the document, necessarily lofty aspirations he fully intends to fulfil during his musical journey. The ambitions were: to play the Royal Albert Hall; to appear on the soundtrack of an elite romcom; to tour Japan; to have a video directed by one of the Italian greats, preferably The Great Beauty auteur, Paolo Sorrentino.

George refers to himself as a 'widescreen crooner,' an epithet that cuts to the kernel of his work as an unabashed modern musical romantic and dovetails perfectly with his ambition. His delicate, immediate song-writing and unique, soul-shaking delivery draw directly from a cinematic canvas, so inevitably there was some screen crossover in these life goals.

George Cosby is not thinking small. 'I always thought if I'm going to do this, I want no regrets,' he says. 'There's no benefit to holding back. If I go down, I might as well go down swinging.' He smiles. 'Life is long but it will go by quickly. It's worth having a proper go at it. If you've got a dream, why not dream it big. Don't be afraid. Set no limitations.'

If he comes across as a performer of supreme self-possession and confidence, there is an attractively uncertain, hesitant note to the manner of George the man, one which parlays straight back into his work. One gets the impression that writing down some immediate, if longterm goals on paper was a sort of wish-fulfilment prophecy. If you dream hard enough, perhaps dreams can turn into reality?

On the brink of his first EP release, a commanding suite of songs that nods to some of the giants of the past while keeping one eye on the future, George has set out his musical stock. He has aesthetic bones. Developing a specifically chic musical persona was borne from his natural romanticism. He might be the 21st century's first widescreen crooner.

His journey there bears some retelling. For a spell, found on Soundcloud, he helped out a super glamorous hit maker in Los Angeles. Then there were the succession of jobs to make rent. 'There was the morgue,' he says with a smile, of his brief period working among the dead at a Balham funeral directors. 'I just met a girl at a party and she said she worked for a funeral service. I said, cool. I was always looking for work, went along to do a day and straight away it was, here's the fridge, here's the bodies. I was cowering in the corner but soon you get used to it. It was interesting life experience to become OK about death.'

Finding the uniqueness of his singing and songwriting voice has been a loving journey through across the arts. He says he is never happier than sitting at the back of a morning screening of a film at his local cinema with a box of popcorn, alone. The reason his music resonates so widely is that he sees it in the continuum of a wider range of aesthetic treats, across the visual arts. They are all branches on the same tree for George, connecting back to the roots of creation. 'I love the ability of any art to transport me to somewhere else.'

George Cosby's debut EP is full of songs which sound like they could be beamed in from the past or plucked from the future. 'There is a timelessness to female artists like Lana Del Rey and Florence [Welch] that I don't think so much exists anymore for men. But if you study the history of music, at its best, the world has been full of them.' He mentions Serge Gainsbourg, Ferry, Scott Walker and the wordsmith he most admires, Mr Cohen.

George's writer's turning point was scripting the unadorned love song, Real Love. 'There's a nod and a wink to it, but it's sincere,' he notes. 'Having an identity matters to me now, whether people like it or not.' Elsewhere on the EP, George lets his romantic valve loose and cranks up the charm on I Only Ever Cry On Planes ('true, almost'). Strings soar and sweep, melodies dip, slide and fly. 'It's about admitting you love love,' he says.

If there is a cinematic feel to the music, it's intentional. 'Definitely I do find myself living for life's big moments, it's romantic gestures, new experiences and adrenaline rush. I guess that leads to chasing the romance in things, but you only outlast the fabled honeymoon period with something that is more deeply rooted than just an idea of what you love.'

Finding the crosspoint between the fantasy and reality of love might just be George's sweet spot. 'When you're younger, you feel love is some kind of truth. That was the case for me, anyway. It was a Hollywood-ised portrayal. You need some searching and maturity to be comfortable with what you love and who you are.' With maturity comes wisdom. 'Sadness isn't always so sad,' he says. 'It can be a beautiful and uplifting melancholia, yearning in it's reflection. Happiness, too, I've learnt is important to recognise and hold close in your arms when it shows it's face.'

George Cosby may well find himself soon the people's romantic. 'My musical journey has almost been about coming to terms with the fact that I'm a romantic at heart. I needed to give myself permission to stop running away from it. Eventually I thought, (I'm going to lean into and embrace it.'

In his unbridled romantic world, there is something of a challenge to perceived views of masculinity. George Cosby is a heart on sleeve, emotions first performer still harbouring those old ambitions. 'They feel like they might be getting a little closer,' he says now, 'because I feel like I am the person I was meant to be.'